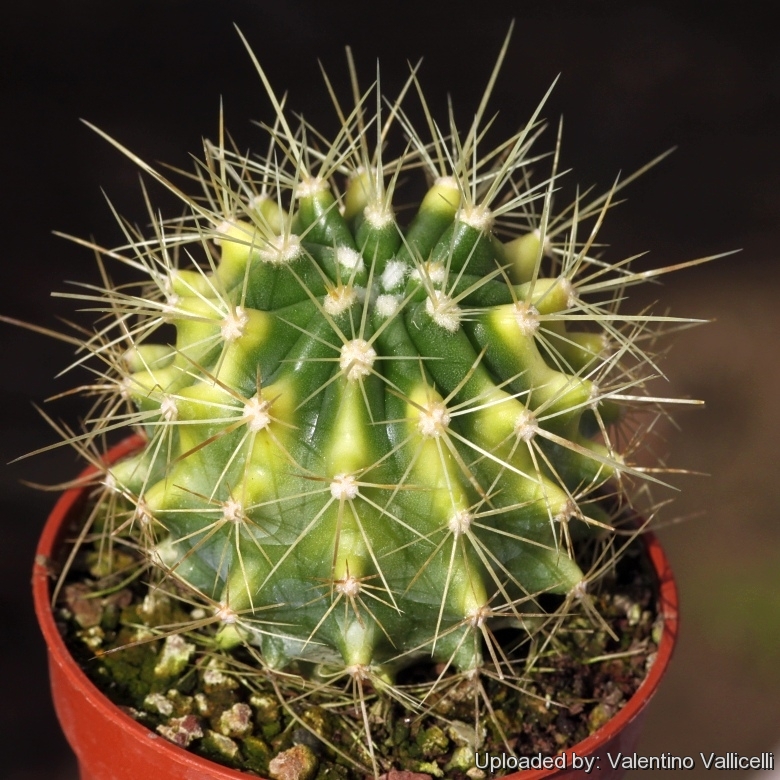 Description: Seedlings of hybrid ferocacti show frequently non-typical colouring and many of the them start getting variegated with yellow or cream patches on the on the stem. A variegated plant has sectors, patches or stripes with two or more different colours, even distinct shades of green. Cacti with variegated stems are often attractive and highly prized. In most species the stems are normally green, and variegated epidermis is an uncommon mutation, termed a chimera. A chimeral variegation is due to losing the ability to produce chlorophyll in some of the plant’s tissue, so that this tissue is no longer green. Tissues lacking chlorophyll are usually white or pale yellow-coloured (due to carotenoid pigments) or red (due to betalain) contrasting with the normal green tissue. There are several forms of variegation, depending on the tissues that have been affected. The variegation in some forms is unstable. The extent and nature of the variegation can vary, and sometimes the plant will return to the green form. In others it is stable and does not change under normal conditions. Because the variegation is due to the presence of two kinds of plant tissue, propagating the plant must be by a vegetative method of propagation that preserves both types of tissue in relation to each other.