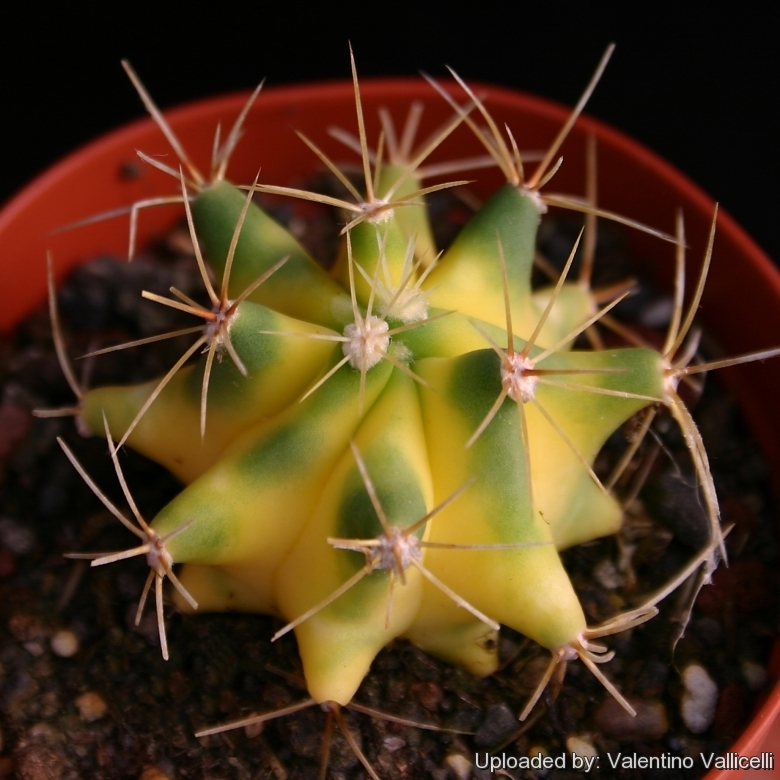 Description: The classical Ferocactus glaucescens is a solitary or basally suckering, barrel cactus. Multiple heads are produced as the plant ages and can form a very large mound. The variegated form (Ferocactus glaucescens f. variegatus) has sectors, patches or stripes with distinct shades of yellow. A very few variegated plants sprout unpredictably time by time among normal green seedling and are very rare. Plants with variegated stems are often attractive and highly prized.
Stems: Glaucous grey and yellow, up to 55 cm in height, 50 cm in diameter. Globular depressed at the apex, it becomes shortly columnar as it ages. But often variegated plants stay much smaller.
Ribs: 11 to 15.
Radial spines: 6 or 7, 2.5-4 cm long, straight, light yellow.
Central spines: 0 or 1, very similar to the radials.
Flowers: Lemon yellow, funnel-shaped, 3-4 cm in diameter. The tepals are oblong, lanceolate, silky, shining; the margins are finely fringed. Stamen, style and stigma are yellow. Stigma lobes: 12-15.
Blooming season: Late spring and summer. The flowers last a very long time. The plants start flowering when about 13 cm in diameter.
Fruits: White, 2 cm long with the remnants of the flowers attached.