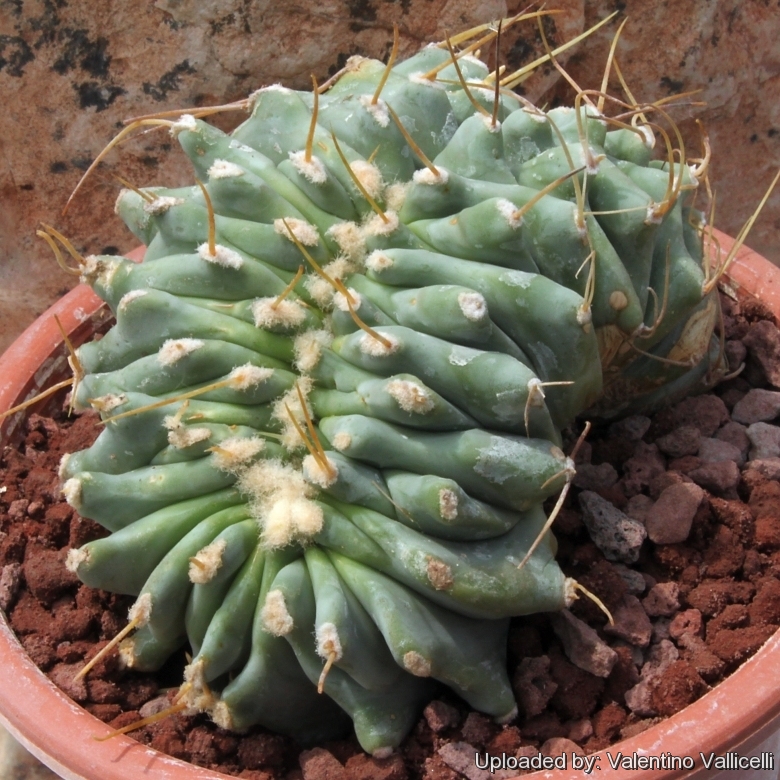 Description: Ferocactus glaucescens f. nudus is the nice spineless form of the blue stemmed Ferocactus glaucescens. This cultivar varies from pure nude specimens to plants with one or few spine per areoles (Partially nudum), but usually the spines completely disappear in mature stems. The crested form Ferocactus glaucescens f. nudus cristatus - despite to its beauty - is still very rare and sought after by collectors, for its unique features.
Stem: Fan shaped, flattened on top, depressed centrally along the line meristem, glaucous grey.
Ribs: Prominent, acute, slightly tuberculate and expanded under areoles, 2 cm high.
Areoles: Greyish-white felted, young areoles circular, becoming elongate in mature flowering plants up to 15 mm long, constricted between the flower and the spine-bearing section, 2-3 cm apart or even less in old plants.
Spines: Absent or very few (1 to 3 not distinguishable from radials to centrals) irregularly scattered on the areoles of young individuals.
Flowers: Lemon yellow, funnel-shaped, 3-4 cm in diameter. The tepals are oblong, lanceolate, silky, shining; the margins are finely fringed. Stamen, style and stigma are yellow. Stigma lobes: 12-15.
Blooming season: Late spring and summer. The flowers last a very long time. The plants start flowering when about 13 cm in diameter.
Fruits: White, 2 cm long with the remnants of the flowers attached.