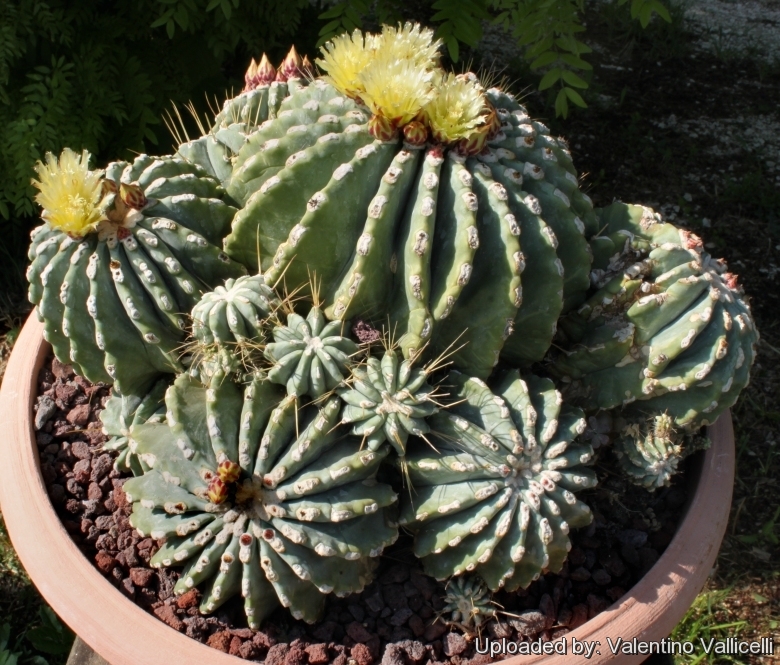 Ferocactus glaucescens f. nudus Photo by: Valentino Vallicelli
Spineless with woolly top. This cultivar varies from pure nude specimens to plants with one or few spine per areoles (Partially Nudum), but usually the spines are present only in young plant (or on new lateral branches) and completely disappear in mature stems.

Description: Ferocactus glaucescens f. nudus is the nice spineless form of Ferocactus glaucescens This cultivar varies from pure nude specimens to plants with one or few spine per areoles (Partially nudum), but usually the spines are present only in young plant (or on new lateral branches) and completely disappear in mature stems, all the other characteristics namely size and shape of stems, flowers, fruits, roots etc. clearly show that they are conspecific.
Habit: Solitary or basally suckering, barrel cactus. Multiple heads are produced as the plant ages and can form a very large mound.
Stems: Glaucous grey, up to 55 cm in height, 50 cm in diameter. Globular depressed at the apex, it becomes shortly columnar as it ages.
Ribs: 11 to 15 prominent, acute, slightly tuberculate and expanded under areoles, 2 cm high.
Areoles: Greyish-white felted, young areoles circular, becoming elongate in mature flowering plants up to 15 mm long, constricted between the flower and the spine-bearing section, 2-3 cm apart or even less in old plants.
Spines: Absent or very few (1 to 3 not distinguishable from radials to centrals) irregularly scattered on the areoles of young individuals.
Flowers: Lemon yellow, funnel-shaped, 3-4 cm in diameter. The tepals are oblong, lanceolate, silky, shining; the margins are finely fringed. Stamen, style and stigma are yellow. Stigma lobes: 12-15.
Blooming season: Late spring and summer. The flowers last a very long time. The plants start flowering when about 13 cm in diameter.
Fruits: White, 2 cm long with the remnants of the flowers attached. 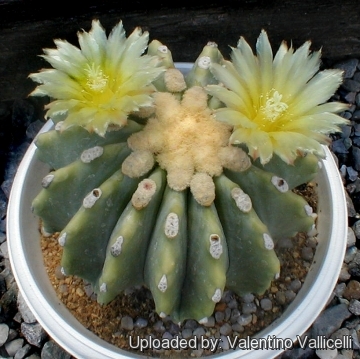 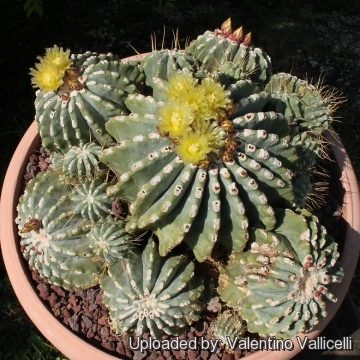 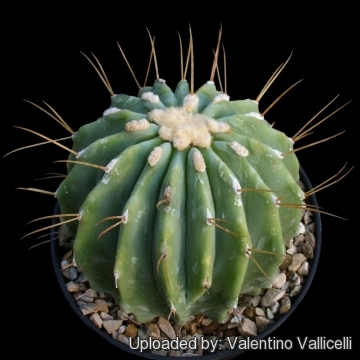 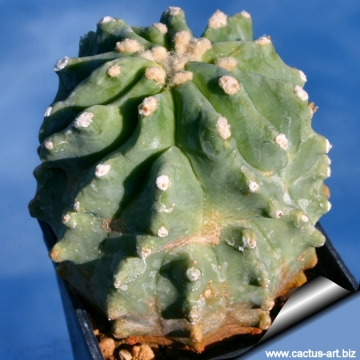 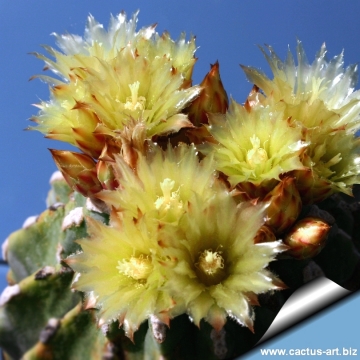 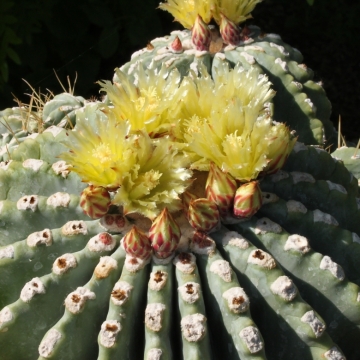 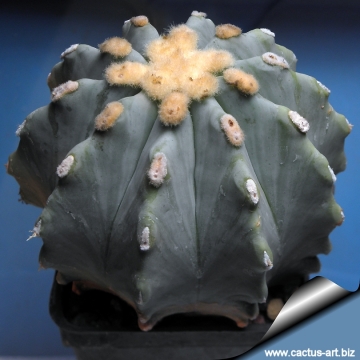 Cultivation and Propagation: Plants are slow-growing to start, but they are easy to grow and require little care once they have reached a nice flowering size. Ferocactus glaucescens is suited for any rich, well drained soil in full sun throughout the year. Pot culture: it grows best in a fairly roomy, well-drained container filled with a porous cactus soil mixture that doesn't contain too much humus. To insure robust plants, water and fertilize during the aestival growth cycle; this plant need plenty of water (indicatively, about once a week). But it's necessary to avoid wetting the bodies of these plants while they are in sunlight. A wet cactus in the sun light can cause sun burning, which can lead to scars or even fungal infections and death. In winter keep it completely dry at 10°C. This usually aids in maintaining a healthier plant, but can tolerate sporadic light frost.
Propagation: Cuttings (if available) made from pieces of the stem of any size can be detached and laid aside for a few days to allow a protective "skin" to form over the cut. They can then be planted in pots. Place them in a spot where they'll receive sun, and do not water until the soil becomes fairly dry. After a while the soil can be moistened regularly but never kept constantly saturated.