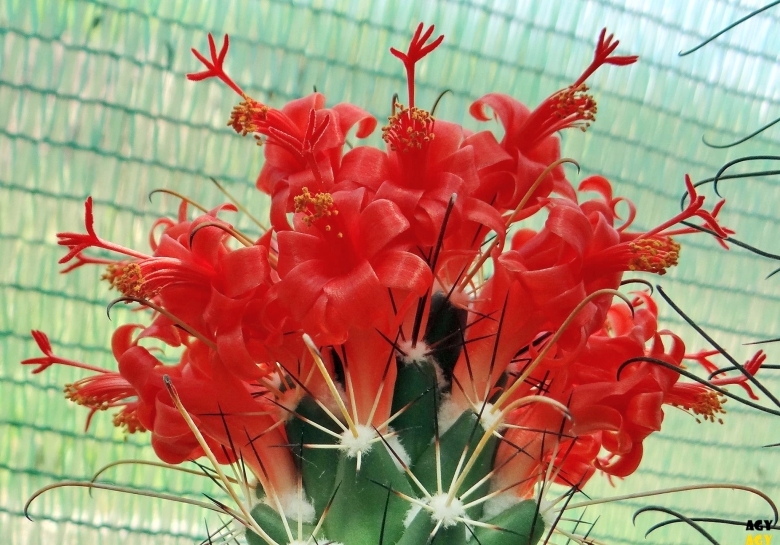 Origin and Habitat: Baja California Norte and Baja California Sur, Mexico It is the best-known species of the genus and has the widest distribution. It quite locally common, but mostly sparse with no marked decline.
Altitude: Cochemiea poselgeri inhabits lower elevations of the peninsula from just near the sea to 120 metres.
Habitat: It grows both in flattened sandy terrains and among rocks or hanging off the side of low cliffs and ridges. It is often found in association with other plant species, including Mammillaria fraileana, Mammillaria schumannii, Mammillaria dioica, Lophocereus schottii, Machaerocereus gummosus, Echinocereus brandegeei, Echinocereus barthelowanus, Pachycereus pringlei, Pachycereus pecten-aboriginum, Stenocereus thurberi, Ferocactus peninsulae var. townsendianus, Peniocereus johnstonii, Opuntia tapona, Opuntia molesta, Opuntia invicta, Opuntia bravoae, Opuntia cholla and Jatropha cinerea. In habitat these cacti tends to burn without the shade of a nurse plant or of a rock, as the creeping stems require filtered sun, they also experience a long winter dry season. This cactus is cultivated as an ornamental, but there is no impact of collection on the wild populations. However some parts of its distribution range are impacted by urban development.

Description: Cochemiea poselgeri (also known as Mammillaria poselgeri) is a cereus like cactus, forming large clumps to 2 metres wide with numerous stems from a central tuberous rootstock, spreading or sometimes pendent from rocks or creeping over the ground. It was the first Cochemiea to be discovered and described, and is a very ornamental species with incredible scarlet flowers. Really it don't looks like a Mammillaria at all.
Stems: Cylindrical 0,6-2 meters long, 4 cm thick, branching from base and strongly tubercled. The stems start out upright, but as they grow they tend to lay down and grow prostrate. Old stems can become very corky and brown.
Tubercles: Remote, distinctly upswept, conic-pyramidal, three-sided, rounded apically, somewhat flattened about 1 cm long, dark green, reddish in bright situations. Axils woolly, sometimes with a few bristles.
Areoles: White-woolly, with the upper axils rarely setose.
Radial spines: 7 to 9, brownish or straw-coloured with white tips at first, eventually whitish 9 to 12 mm long.
Central spine: Usually 1 hooked, 15-20(-25) mm long.
Flowers: Bright scarlet or red-orange rather unique in shape and appearance, appearing in the upper axils (like in Mammillaria), but near the stems apex, 3 cm or more long, zygomorphic, with a long curved tube and oblique limb with double ring of recurring segments reminiscent of Epiphyllum, but don’t open very wide; stamens and style are red and exserted, but with yellow pollen adding a colour contrast.
Blooming season: Late summer. If they are kept dry for several months, a good watering during the hot season will trigger a big flush of bloom that lasts about two weeks. With regular watering they tend to flower sporadically and sparsely over a longer period.
Fruit: Globular, obovoid to broadly elongate, red, 6 to 8 mm in diameter and wedged between the tubercles.
Seeds: Black. 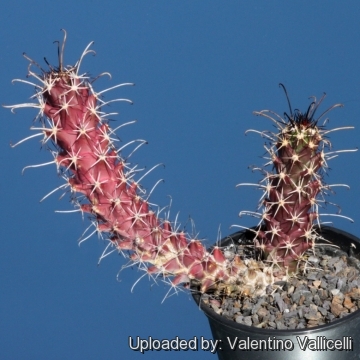 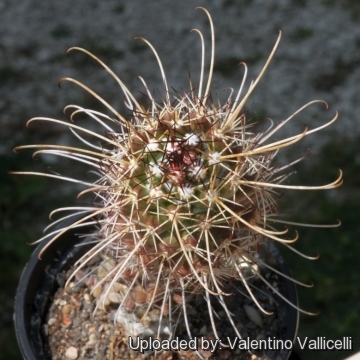 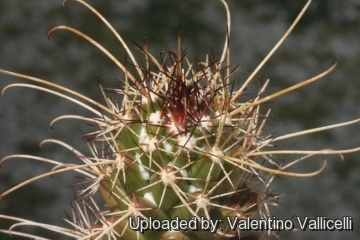 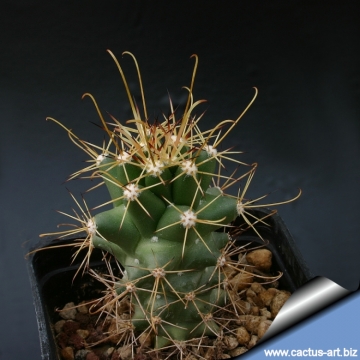 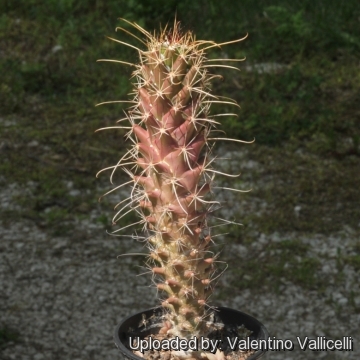 Cultivation and Propagation: Cochemiea poselgeri is is the most popular species and forms long stems which become trailing in age. Eventually this plant will droop or hang. Coming from the arid region of Baja California, although coastal, this specie would prefer cool temperatures with good and constant airflow.
Growth rate: It is a small growing, but easily flowering species. It takes several years to offset, but once it starts it can form large bunches in just a few years given the best conditions.
Soils: Use a an open and free draining mineral compost with little organic matter (peat, humus) that allows therefore roots to breath (as it is rot prone).
Repotting: Repotting every 2-3 years. As it is especially prone to rot under-pot in a smaller container filled with very porous compost. Use pot with good drainage.
Watering: It likes a winter's rest and should be kept almost completely dry during the winter months, If the soil is allowed to be dry for too long root loss could follow but equally the same result would occur if the plants are both wet and cold. From March onwards the plant will begin to grow and watering should be increased gradually until late May when the plant should be in full growth. Water regularly during the summer so long as the plant pot is allowed to drain and not sit in a tray of water. During hot weather you may need to water the plants more frequently so long as the plant is actively growing. From late September watering should be reduced to force the plant to go in to a state of semi dormancy, by October you should be back in to the winter watering regime. Keep dry with ample airflow in winter. In the rest period no high atmospheric humidity!! Care must be taken with watering as they tends to become swollen and untidy in growth habit if given too much water and shade.
Fertilization: Feeding may not be necessary at all if the compost is fresh then, feed in summer only if the plant hasn't been repotted recently. Do not feed the plants from September onwards as this can cause lush growth which can be fatal during the darker cold months. .
Hardiness: Grown specimens resist to -4°C for a short time, but it is best to keep above 5° C to avoid ugly spots on the plant epidermis. Some warmth throughout the year will increase the grower's success.
Exposition: It requires filtered sun light but tolerates full sun if weather its cool. It dislikes harshest summer sun. Tends to bronze in strong light, which encourages flowering and heavy wool and spine production. If kept too dark they may become overly lush and greener and could be prone to rotting due to over watering.
Uses: It is an excellent plant for container growing. It always looks good and stays small. It look fine in a cold greenhouse and frame.
Pests & diseases: It may be attractive to a variety of insects, but plants in good condition should be nearly pest-free, particularly if they are grown in a mineral potting-mix, with good exposure and ventilation. Nonetheless, there are several pests to watch for:
- Red spiders: Sensitive to red spider mite. Overhead watering is helpful in controlling mites.
- Mealy bugs: Occasionally mealy bugs they develop aerial into the new growth among the wool with disfiguring results, but the worst types develop underground on the roots and are invisible except by their effects.
- Scales: Scales are rarely a problem.
- Rot: Rot it is only a minor problem with cacti if the plants are watered and “aired” correctly. If they are not, fungicides won't help all that much.
Propagation: Direct sow after last frost or cutting. Seeds germinate in 7-14 days at 21-27° C in spring, remove the glass cover gradually as the plants develops and keep ventilated, no full sun for young plants! The seedlings should not be disturbed until they are well rooted, after which they can be planted separately in small pots. Cuttings: wait until the offsets that appear at the base of old clustered specimens are 1/3 the size of the parent and then detach and plant. Cuttings will take root in a minimum temperature of 20° C (but better in hot weather). Cuttings of healthy shoots can be taken in the spring and summer. Cut the stem with a sharp, sterile knife, leave the cutting in a warm, dry place for a week or weeks (depending on how thick the cutting is) until a callus forms over the wound. Once the callus forms, the cutting may be inserted in a container filled with firmed cactus potting mix topped with a surface layer of coarse grit. They should be placed in the coarse grit only; this prevents the cut end from becoming too wet and allows the roots to penetrate the rich compost underneath. The cuttings should root in 2 to 6 weeks.