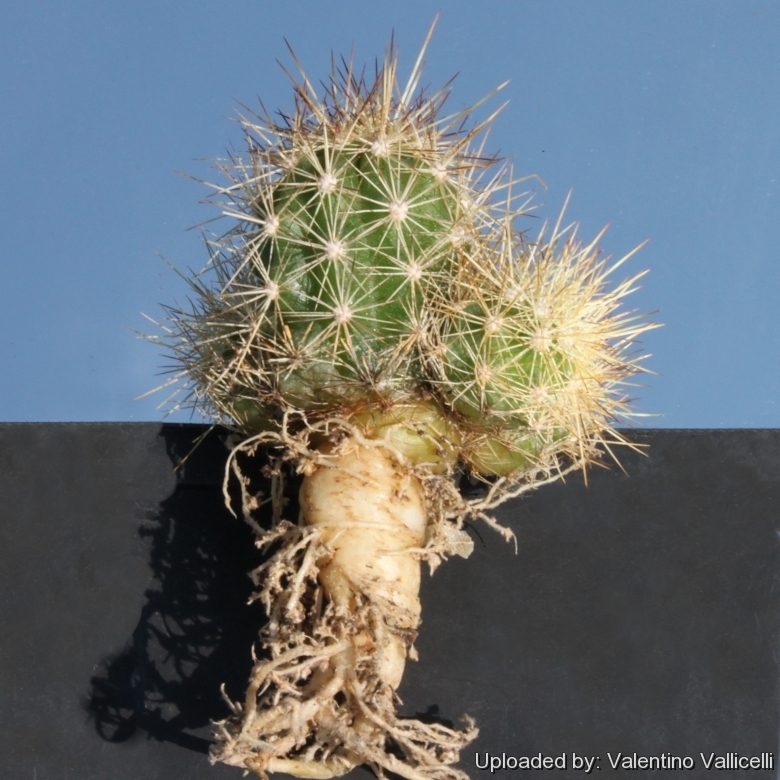 Origin and Habitat: Magdalena region of Baja California Sur, Magdalena and Margarita Islands (Mexico)
This species has a very small range, with an extent of occurrence of around 120 km2 and only two known locations. The species is locally not abundant.
Type locality: Collected by J. N. Rose on the mesa (rocky highland), near Santa Maria bay on the ocean coast.
Altitude: 10-300 metres above sea level.
Habitat: It typically grows on low rocky hillsides, in granite mountains in gravel soil and in sandy washes near the coast and in the Gulf islands. The climate is very dry and summer rains there typically begin in August, later than in the rest of the Sonoran Desert Region, but these islands receive fog most of the year. The species occurs in xerophyllous scrub, and the same areas support many endemic succulents and xerophyte plants such as Cochemiea halei, Cochemiea poselgeri, Mammillaria dioica, Mammillaria schumannii, Machaerocereus eruca, Machaerocereus gummosus, Opuntia molesta, Opuntia cholla, Opuntia tesajo, Opuntia pycnantha, Opuntia invicta, Pachycereus pringlei, Stenocereus thurberi, and Lophocereus schottii.

Description: Echinocereus barthelowanus is a fiercely spined cactus with stems always growing in clusters and forming large cushions up to 80 cm wide. The branches are attached to each other with such fragile connections that a compact cluster will fall to pieces in handling, and often larger clusters are thought being groups of seedling rather than single branched plants. Echinocereus barthelowanus is a poorly known cactus.
Related species: Echinocereus barthelowanus is closely related and similar to Echinocereus brandegeei (a.k.a. “Casa de rata”) but it has longer and more attractive interlacing spines. If not in flowers it is also very difficult to certainly distinguish from Cochemeia halei.
Stems: Cylindric, 10-20(30) cm long, 3,5 to 5 cm in diameter.
Ribs: 8-10, somewhat tuberculate below, but completely hidden by the stout numerous spines.
Areoles: Large, approximate, 2 to 5 mm apart, white felted when young.
Spines: Numerous, acicular, dagger-like, not clearly differentiated into radials and centrals, sometimes 7 cm long, pinkish to red when quite young, afterwards white or yellow with brown or blackish tips, in age fading to black or grey.
Central spines: 5-9, stout, straight, to 7 cm long.
Radial spines: As many as 18, usually 1-2 cm long.
Flowers: Broadly funnelform, lavender, arising from near the stem tips to the bases, only 10 to 50 mm long and less than 6 cm in diameter; perianth-segments oblong, 3 to 4 mm long, ovary minute, strongly tubercled, hidden under the mass of spines; spine-clusters on ovary with 6 to 1 2 white or pinkish tipped spines, half as long as the flower. 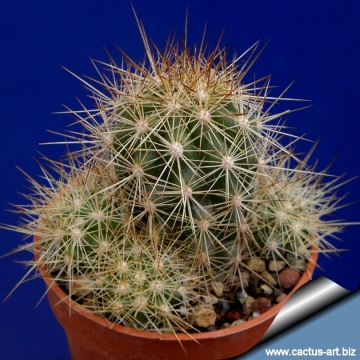 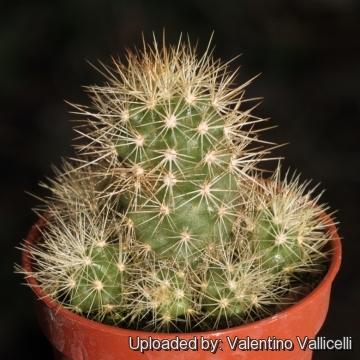 Cultivation and Propagation: Echinocereus barthelowanus is a species that is difficult to keep in cultivation, which is a pity since when grown well it is one of the most attractive plants in the genus. It has a somewhat fragile root systems that is prone to rot. It suited to hanging baskets as well as pots.
Soil: Use a loose well drained cactus mix.
Repotting: Since they are rapid growers need plenty of space for their roots, repotting with fresh potting-mix should be done every other year or when the plant has outgrown its pot. However, repotting doesn't necessarily mean they'll need larger containers.
Sun Exposure: It grows in the desert and tolerates full blasting sun. In culture light shade when young, full sun later. Outside it likes strong sunshine, but is tolerant and do well with light shade during the hot Summer months, inside it needs bright light, and some direct sun. Tends to bronze in strong light, which encourages spine production.
Watering: They require moderately watering through the growing season. This can be done weekly or more frequently during the summertime, if the weather is sunny enough, but allow to dry fully before watering again. Kept this way, plants will show a healthy growth. Keep rather dry as soon as the temperature starts dropping in October and keep it dry in winter. The plant survives outside without protection in winter (cold hardy to -5° ) but is then somewhat prone to rot, too.
Fertilization: Give an occasional high potassium liquid feed during the active growing period.
Hardiness: Winter care presents no problems at temperatures from 5 to 15 degrees centigrade with plenty of light, but frost hardy to -5°C for short periods if very dry.
Garden uses: Excellent as landscape or patio plant. It is suitable for “desert” gardens, in association with other xerophytes. Where the open air cultivation is not possible due to the climate, it is to be cultivated in pot in order to shelter it in winter. It look fine in a cold greenhouse and frame.
Pest and diseases: They are generally fairly easy to grow, especially if kept pest-free. They are susceptible to, scale insects and spider mite. Watch carefully for infestations of stem and root mealy bugs, and damage from these may well initiate fungal attack.
Propagation: Easy to propagate from cuttings or seeds. Take cuttings spring or summer, let them dry till the ends callous well. Then replant them in fresh cactus soil that is ever so slightly moist, and keep it that way till they root. Surface sowing is the best; seeds germinate in 14-28 days at 20° C, remembering that seedlings dislike strong light and dry conditions.