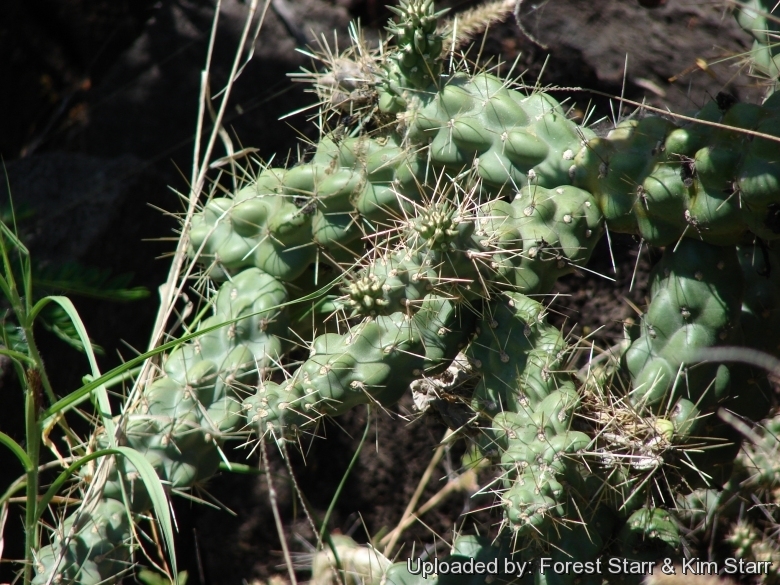 Origin and Habitat: Cylindropuntia cholla is endemic to Mexico from the states of Baja California and Baja California Sur. The species also occurs on many of the off-shore islands in the Gulf of California (Martir, Angel de la Guarda, Partida Norte, San Lorenzo, Tortuga, San Marcos, San Ildefonso, Coronados, Carmen, Danzante, Monserrat, Santa Catalina, Santa Cruz, San Diego, San Jose, San Francisco, Espiritu Santo and Cerralvo). This species is widespread and very common (even weedy) throughout its range.
Habitat and Ecology: It grows in coastal sage scrub and desert scrub. There are no threats to this species. It is closely related to Cylindropuntia fulgida of the mainland and other Sonoran Islands, the distinctions being subtle.

Description: Cylindropuntia cholla (Chain link cholla) is a spiny shrubby or tree-like cactus, 0.5 to 3 meters high, low and sprawling to erect and with distinct erect trunks. The top of plant often dense and broad with joints in almost horizontal whorls. In its native home Cylindropuntia cholla often takes on abnormal shapes, for the joints, which break off easily and many small dwarf plants are found everywhere about the larger plants. In this species, as in a few other opuntias, the fruits are quite proliferous, hanging on for a number of years and usually remaining green.
Stem: Nore or less cylindrical with determinate, rhythmic (seasonal or annual), constricted growth increments resulting in individual stem segments or joints (cladodes).
Trunk: 7 to 15 cm in diameter very spiny at first and becoming more spiny each year for some time, but in age spineless and developing a smooth, brownish yellow bark.
Cladodes: Pale, blue-green, often glaucous, easily detached, 6-11 cm long, 3-5.5 cm in diameter, with large broadly oval more or less compressed tubercles.
Areoles: Cream, ageing grey.
Leaves: Present only on young growing stem segments, 1 per areole, succulent, conical and soon deciduous.
Spines: Usually numerous (5-16, on most areoles) sometimes absent, more or less porrect, ,20-45 mm long, orangish brownish with yellow tips covered with reduced to broad, loose-grey papery sheaths. Principal spines 3-7. Secondary spines 3-11. The spination is however quite variable and the plants rather sparsely to densely spiny.
Glochids: The glochids ((small, readily detachable spines with tiny retrorse barbs) are numerous, inconspicuous, 1.5-4 mm long, dark yellow.
Flowers: Rather small, 3 cm broad, pale pink to deep purple with relatively few tepals. Stamens sensitive, the filaments close inward when touched, covering a visiting bee.
Fruit: Green, highly succulent, globose, spineless, 17-40(-50) mm long, 15-35 mm in diameter, usually proliferous, often in long chains of 2-5(-12) individuals or forming compound clusters. They are, however, easily detached, and on falling to the ground, readily take root and start new colonies.
Seeds: Numerous, very small, often abortive, with a light tan, bony, aril-like structure covering the actual seed. 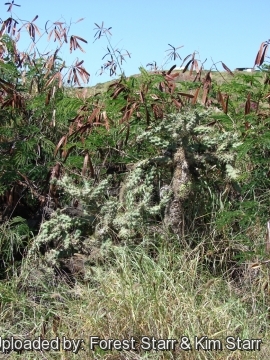 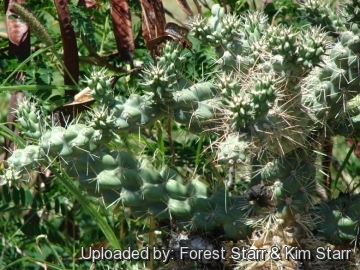 Cultivation and Propagation: Cylindropuntia rosea is a summer grower cactus that offers no cultivation difficulties. Its cylindrical spiny joints provide a striking accent for an otherwise dormant cactus garden.
Soil: Use a very a particularly draining substratum, as it is sensitive to rottenness when in presence of humidity and low temperatures and let the soil dry out between waterings, since it's natural habitat is in sandy or gravelly, well draining soils.
Repotting: Repot in the spring, when their roots become cramped. Generally, they should be repotted every other year in order to provide fresh soil. After repotting, do not water for a week or more.
Water: In summer, during the vegetative period, it must be regularly watered, but allowing the substratum to completely dry up before irrigating again (but do not overwater ); in winter, it’s to be kept dry. Preferable not to water on overcast days, humid days or cold winter days.
Hardiness: It is a not very frost resistant cactus, hardy to -2° C (or less if very dry). However in cultivation it is better not to expose it to temperatures lower than -0° C, even if in an aerated and protected location, in order to avoid the formation of anti-aesthetic spots on the epidermis. In presence of high atmospheric humidity avoid any frost as it is particularly sensitive to root rot. USDA Zone 8-10. It can handle extremely high temperatures in summer.
Exposure: Outside full sun or afternoon shade, inside needs bright light, and some direct sun.
Use: It is suitable for “desert” gardens, in association with other xerophytes. Where the open air cultivation is not possible due to the climate, it is to be cultivated in pot in order to shelter it in winter. This species was historically used as a food source by the local people.
Warning: It is armed with treacherous spines that are extremely sharp (This is one of the most dangerous of all cactus). Handle it with extreme caution, and keep it away from gangways and areas frequented by children and animals. Spines must be meticulously removed with tweezers.
Propagation: Stem division. Prickly pear pads root easily and grow rapidly when placed in loose, well-draining soil.