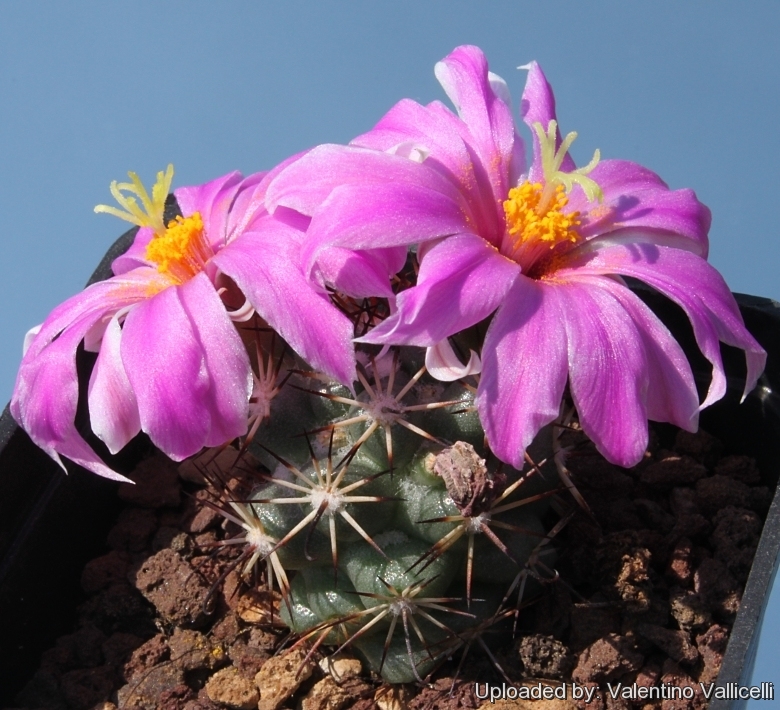 Description: Small clumping plants with greyish-green bodies, sometime with up to 40 stems in a single cluster.
Stem: Soft, blue-green or grey-green epidermis that tinge in pink in bright sun up to 5(-6) cm wide, globose to depressed conical when growing in habitat. While cultivated plant have (frequently) oblong offsetting stems.
Tubercles: Prominent, rounded, usually depressed, somewhat united with adjacent ones almost into ridges, not grooved, juicy but not milky. Axil slightly woolly, without bristles.
Spines: All whitish with a darker brown tip.
Radial spines: 9-15 (usually 8-9), very regularly spaced and they stand out well, almost enough to act as a recognition character. They are up to 12 mm long, stout and glabrous in adult specimens. ( In very young seedling the radial spines are approx 10 to 11 feather like with long spreading hairs, in one year seedling simply pubescent)
Central spines: 1 (occasionally 2 or 3) one of which usually strongly hooked, pure white below, but tipped very dark brown from the start.
Flowers: Relatively large (2,5-4 cm in diameter) near the top of the plant, funnel shaped, long-tubed, purplish pink, showy, nearly as large as the plant bodies, presumably attractive to hummingbirds. Segments about 10, lanceolate, acuminate, with long narrow spreading stigmata, stigma lobes 6, linear, green, stamens numerous, erect, shorter than style, slender erect and pale.
Blooming season: Summer. This is quite early for a Mammillaria and start fowering when still very young, it usually produces the first blooms in the second year of a new branch forming.
Fruits: Slightly protruding from the stem, sunken and circumscissile, in a cup between the tubercles, short and dull in colour.
Seeds: Dull black, pitted, whith a large depressed scar, less than 1 mm long.

Subspecies, varieties, forms and cultivars of plants belonging to the Mammillaria schumannii group

Notes: Mammillaria shumannii was once placed in the segregate genus Bartschella because of its fruit anatomy and large pink flowers located at the top of the plant. The fruit are red, thin-skinned and often break off from a basal pore rather than falling whole (like in most Mammillaria). 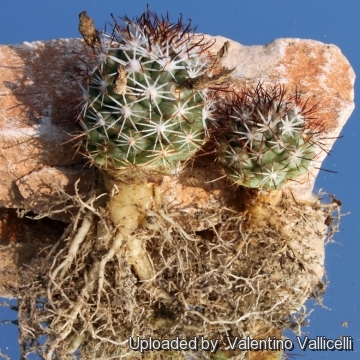 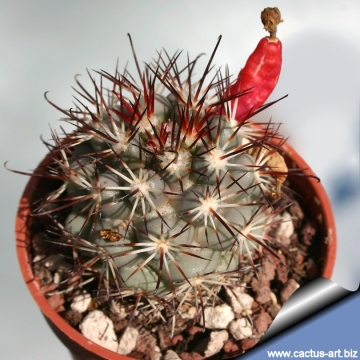 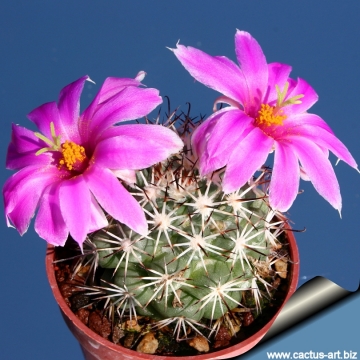 The flowers are very showy and nearly as large as the plant bodies. Photo by: Cactus Art 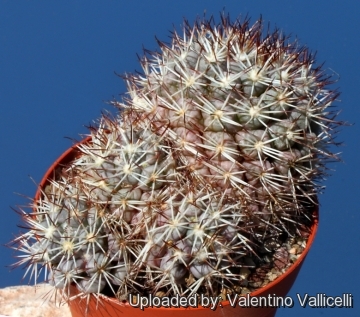 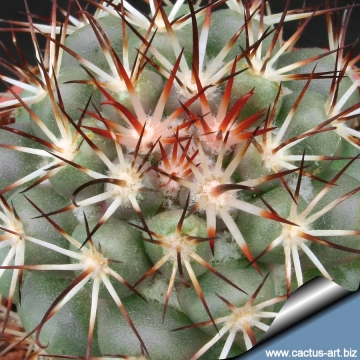 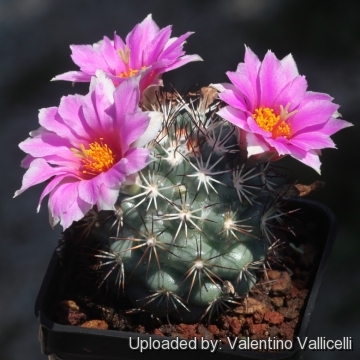 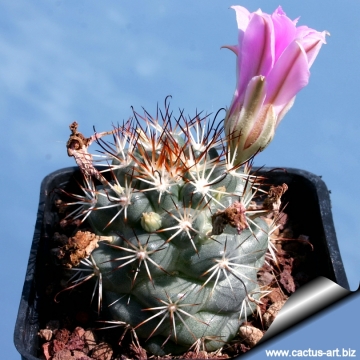 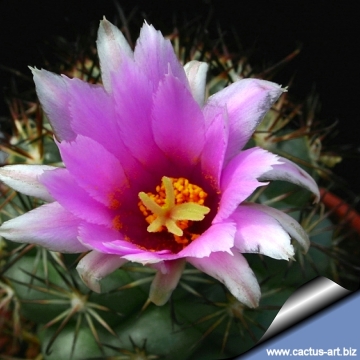 Cultivation and Propagation: This plant is somewhat difficult to cultivate. During the summer it is best to keep the plants outside where the temperature can rise to over 30 C with no harm to the plant. Furnish good drainage and use a an open and free draining mineral compost that allows therefore roots to breath (as it is rot prone) It likes a winter's rest and should be kept almost completely dry during the winter months, If the soil is allowed to be dry for too long root loss could follow but equally the same result would occur if the plants are both wet and cold. From March onwards the plant will begin to grow and watering should be increased gradually until late May when the plant should be in full growth. Water regularly during the summer so long as the plant pot is allowed to drain and not sit in a tray of water. During hot weather you may need to water the plants more frequently so long as the plant is actively growing. From late September watering should be reduced to force the plant to go in to a state of semi dormancy, by October you should be back in to the winter watering regime.
Need full sun avoiding only the harshest summer sun, if kept too dark they may become overly lush and greener and could be prone to rotting due to over watering.
Feeding may not be necessary at all if the compost is fresh then, feed in summer only if the plant hasn't been repotted recently. Do not feed the plants from September onwards as this can cause lush growth which can be fatal during the darker cold months. Grown specimens resist to -4°C for a short time, but it is best to keep above 5° C to avoid ugly spots on the plant epidermis.
Propagation: Direct sow after last frost. (seldom produces offsets)