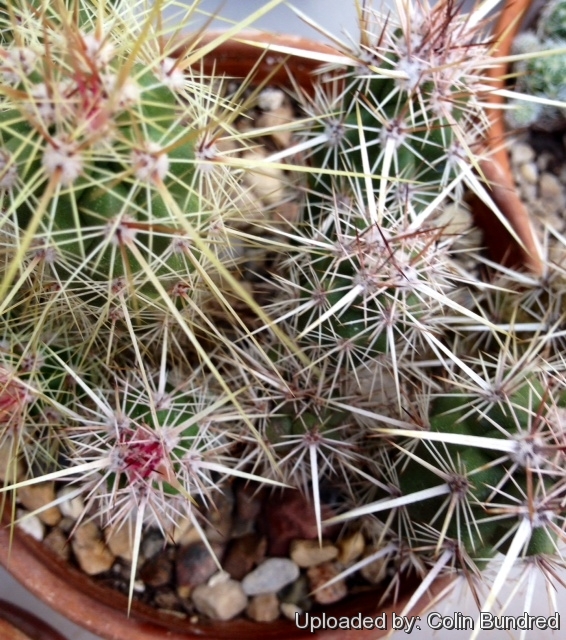 Echinocereus brandegeei Photo by: Colin Bundred
This species shows a remarkable variation in spines. These plants were growing side by side in the seedling tray and were potted on together. The different spines did not show up for a number of years. I thought that a rouge seed of Echinocereus barthelowanus had got into the seed packet!

Origin and Habitat: Echinocereus brandegeei is found in Mexico within Baja California Sur from the central part to the Cape, as on almost all islands from San Marcos to Espíritu Santo in the Gulf of California. The species is distributed in a large area, it is common and occurs in protected areas.
Type locality: El Campo Allemand, Lower California.
Altitude: From sea level to 400 metres, sometime extending higher on Arroyos and Mesas.
Habitat: E. brandegeei inhabits the driest region of Mexico typically in poor, rocky soil on hill sides in fully exposed situations. The species aslo occurs in shrub desert, stony hills, in mineral loamy, and former sea bed (shell shingle) loamy. It is the most widespread species of the genus on Gulf islands. The summer rains there typically begin in August, later than in the rest of the Sonoran Desert Region. The same areas support many endemic succulents and xerophyte plants such as Pachycereus pringlei, Stenocereus thurberi, Opuntia tapona, Echinocereus mammillaris, Stenocereus eruca, Cylindropuntia cholla, Ferocactus peninsulae, Ferocactus rectispinus, Stenocereus gummosus, Stenocereus thurberi, Jatropha cuneata, Pedilanthus macrocarpus, Bursera microphylla and Fouquieria diguetii. In some part of its range it grows among Echinocereus hancockii and Opuntia invicta this three species look remarkably like one to each other. The adaptive value of this convergence (if any) is unknown. The major threat for this species is agro-industrial cattle ranching. The constant trampling of cattle causes the soil to loosen up and then it gets washed away during the raining season. Very often the plants get washed away with the soil. But severe threat occurs in small parts of the species range.

Description: Echinocereus brandegeei is a variable cactus. The stems always grow in clusters, which vary from a few stems to great loose mounds more than 2 m across and less than 35 cm tall. The spines are even more variable. In some localities this fiercely armed species grows among devil's club cholla (Opuntia invicta), the spines tend to be the shortest and stoutest and the two species look remarkably one to to each other. This may be a case of convergent evolution. The adaptive value of this convergence, if any, is unknown.
Roots: diffuse
Stems: Highly variable in different populations, ranging from short and erect to long and sprawling but erect at the tip. Joints, light green, greenish-grey or dull green, covered with spines, cylindrical usually much narrowed toward the base, 20-35 cm long (sometimes one meter long or more) and 4-6 (or more) cm in diameter.
Ribs: 8-10, indistinct, almost entirely superseded by tubercles.
Tubercles: Hexagonal in shape.
Areoles: Circular roundish, white to greyish.
Spines: Extremely variable, ranging from long and thin to short and stout, and yellow, reddish, brown, black, or whitish at first often tinged with red, in age dark grey.
Radial spines: 10-18, spreading, acicular, stiff, round, to 2 cm long.
Central spines: Usually 4, forming a cross, very much stouter, strongly angled, more or less flattened, stiff, swordlike, erect or ported, the lowest one decidedly so, sometimes 8 cm long.
Flowers: Borne from the stem tips to the bases, bight pink to purplish with deep red petal bases, broadly funnelform, about 5,5-9,5 cm long and up to 4,5-8,5 cm across; areoles on ovary and tube closely set, filled with pale acicular spines and long white wool. Outer perianth magenta or light magenta and dark magenta with reddish midstripe, inner perianth magenta or light magenta with magenta midstripe and red at base. Stigma lobe number 6-9, yellow or yellow with faint greenish tint, not green.
Blooming season: Echinocereus brandegeei doesn’t follow the usual habit of the genus of flowering in spring. It blooms from late July into September. Flowers are seldom seen in cultivation.
Fruit:Globular, red 3 cm. in diameter, spiny.
Seeds: black, tuberculately roughened.
Remarks: A form of Echinocereus brandegeei has been sold as Mammillaria halei in recent years but the latter should be recognisable because one of the differences is that the central spines are faintly tipped brown. 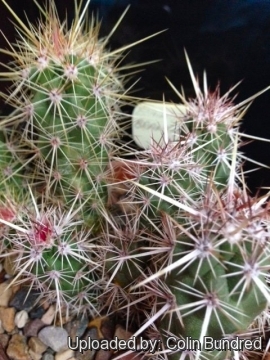 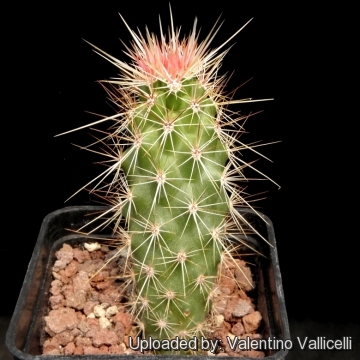 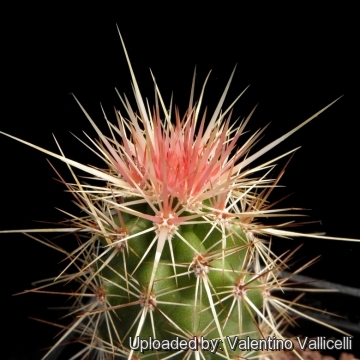 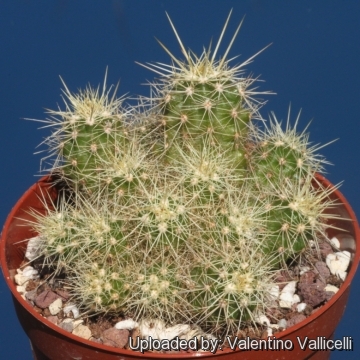 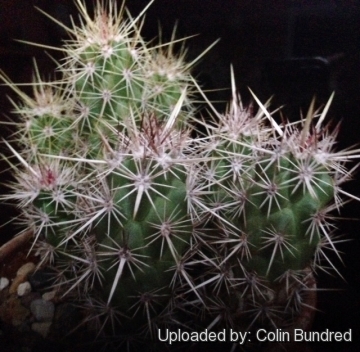 Echinocereus brandegeei Photo by: Colin Bundred
Send a photo of this plant.

Cultivation and Propagation: Echinocereus brandegeei is of relatively easy culture, but has a somewhat fragile root systems that is prone to rot. It suited to hanging baskets as well as pots.
Soil: Use a loose well drained cactus mix.
Repotting: Since they are rapid growers need plenty of space for their roots, repotting with fresh potting-mix should be done every other year or when the plant has outgrown its pot. However, repotting doesn't necessarily mean they'll need larger containers.
Sun Exposure: It grows in the desert and tolerates full blasting sun. In culture light shade when young, full sun later. Outside it likes strong sunshine, but is tolerant and do well with light shade during the hot Summer months, inside it needs bright light, and some direct sun. Tends to bronze in strong light, which encourages spine production.
Watering: They require moderately watering through the growing season. This can be done weekly or more frequently during the summertime, if the weather is sunny enough, but allow to dry fully before watering again. Kept this way, plants will show a healthy growth. Keep rather dry as soon as the temperature starts dropping in October and keep it dry in winter. The plant survives outside without protection in winter (cold hardy to -5° ) but is then somewhat prone to rot, too.
Fertilization: Give an occasional high potassium liquid feed during the active growing period.
Hardiness: Winter care presents no problems at temperatures from 5 to 15 degrees centigrade with plenty of light, but frost hardy to -5°C for short periods if very dry.
Garden uses: Excellent as landscape or patio plant. It is suitable for “desert” gardens, in association with other xerophytes. Where the open air cultivation is not possible due to the climate, it is to be cultivated in pot in order to shelter it in winter. It look fine in a cold greenhouse and frame.
Pest and diseases: They are generally fairly easy to grow, especially if kept pest-free. They are susceptible to, scale insects and spider mite. Watch carefully for infestations of stem and root mealy bugs, and damage from these may well initiate fungal attack.
Propagation: Easy to propagate from cuttings or seeds. Take cuttings spring or summer, let them dry till the ends callous well. Then replant them in fresh cactus soil that is ever so slightly moist, and keep it that way till they root. Surface sowing is the best; seeds germinate in 14-28 days at 20° C, remembering that seedlings dislike strong light and dry conditions.