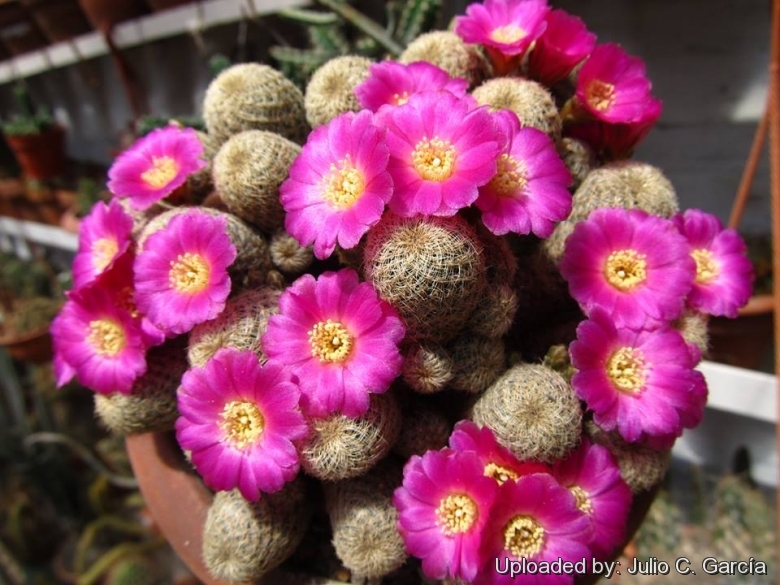 Description: Rebutia steinbachii subs. verticillacantha best known as Sulcorebutia verticillacantha is one of the innumerable local form of the very variable Rebutia steinbachii (= Sulcorebutia steinbachii) with 13-21 spiraling ribs, no central spines, and 12-14 pectinated radials. Rings of light purple flowers with a contrasting yellow-orange throat brighten up the plant in spring. In its habitat it is a very variable species.
Note: Rebutia steinbachii subs. verticillacantha is apparently a neotenic variety of the species in which juvenile spination is retained throughout the life of the plant, while many of the other varieties are dimorphic (short spined juvenile forms transform at maturity to strongly spined forms).
Habit: It is a clumping plant growing flat to the ground and readily forming, especially in cultivation, clumps of many heads from the base.
Roots: Non-succulent, fibrous, or more or less thickened and carrot-like.
Stem: Single heads 25–35 mm wide, and up to 35 mm tall, globular, flattened and somehow apically depressed, grey-green to dark olive green sometime tinged red, not completely hidden under the covering of spines.
Ribs: About 17, spiralling, poorly distinguished, forming oblong rhomboid tubercles with well-defined grooves.
Areoles: White or yellowish, long, narrow 3-6 long, 1,5 mm large.
Central spines: Absent.
Radial spiens: (6-)8-12(-14) tiny, thin, pectinate pointing sidewards and downwards up to 5 mm in length. Creamy-white, yellowish or amber, brow at the base. These spines don't obscure the stem but form a nice spiralling pattern on the stem..
Flowers: Typically yellow with orange petals tip, or light purple with a contrasting yellow-orange troat, but also pure yellow, orange, red or violet or bicoloured, numerous in a ring at the base of the plant.
Blooming season: Spring (April - May) and remain open for up to five days. 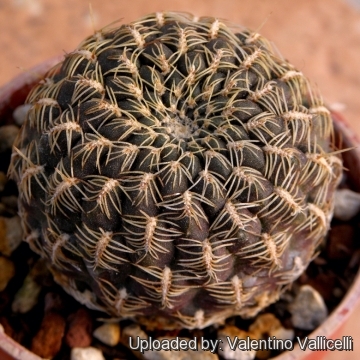