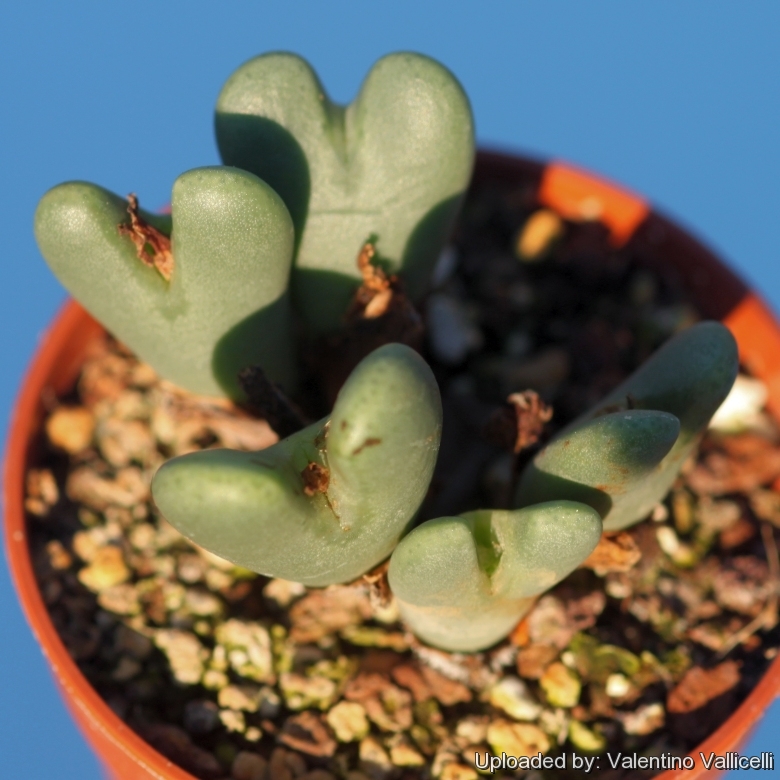 Description: Conophytum gracile is a small branched perennial, succulent, shrublet with short, erect stems which are covered with old leaf sheaths. This is one of the several varieties of the morphologically variable Conophytum bilobum subs. altum, a taxon growing widespread in Namaqualand (Northern Cape South Africa). It has several collected forms that were early published as full species or as varieties, but these were too weak botanically to stand, so they are all combined in Conophytum bilobum subs. altum.
Distinguish features: It is a small branched shrublents that unlike other “bilobe” forms slender upright stems with age. Moreover it has a rather meagre number of petals as compared with the plenitude of the corolla of other bilobes.
Bodies (paired leaves): The small, cone-shaped 'heads' or 'bodies' are actually pairs of leaves joined to their tips with only a small opening, through which the flower stalk appears in autumn. Individual bodies 20-25 mm long, 8-9 mm wide, compressed, 6 mm thick. Lobes 3-5 mm long and wide, rounded. Surface smooth, light green, dark green, finely velvety. Large clumps of these small heads develop through the years.
Flowers: Small, daisy-like. Petals always yellow.
Blooming season: Blooms mostly in autumn (in cultivation in Europe August-November). The flowers are numerous and diurnal.
Note: Conophytum bilobum subs. altum is separated from Conophytum bilobum ssp bilobum because of its long internodes and small, well-fused leaves. At some localities it appears to cross with stemless plants of Conophytum bilobum ssp bilobum and with Conophytum meyeri. Conophytum gracile had the same Maughan-Brown number as Conophytum plenus E.Br.; assuming that they were collected together, they might merely represent old and young plants.