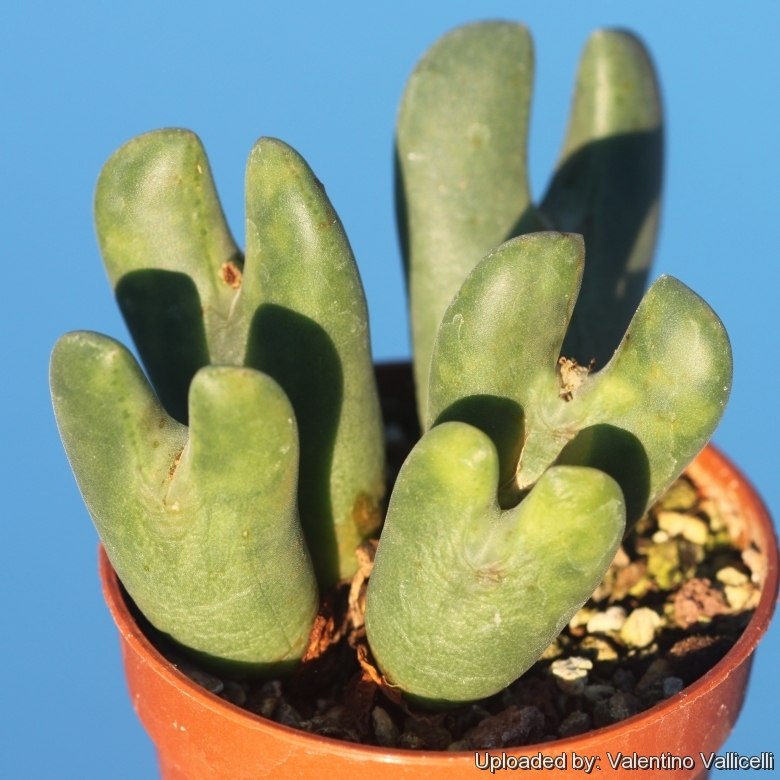 Origin and Habitat: Conophytum simplum is found in the western part of South Africa in the Little Namaqualand.
Habitat: This species grows in a well drained soil with some water in winter and some sun.

Description: Conophytum simplum is one of the several varieties of the morphologically variable Conophytum bilobum, a taxon growing widespread in the western part of South Africa. It has several collected forms that were early published as full species or as varieties, but these were too weak botanically to stand, so they are all combined in Conophytum bilobum.
Distinguish features: Caespitose (groundcover) plant, stemless or with short stems with time. It is has small, almost cylindrical bodies 40-50 mm high, 10-12 mm thick lobes erect, 6 mm long and wide, with two slightly divaricated lobes, more or less stright insides, and rounded or the back, surface green, unspotted, very fine velvety.
Derivation of specific name: From the description, it is not clear what was 'simple' about this variant of C. Bilobum, but its papillae (as with all Conophytums, and unlike e.g. some Gibbaeums) are simple (are microscopic one-celled hairs), which might account for the epithet. These papillae are really microscopic, often being less in length than the thickness of a human hair.
Flowers: Yellow.
Blooming season: The flowers are autumnal (rarely in summer) and diurnal.