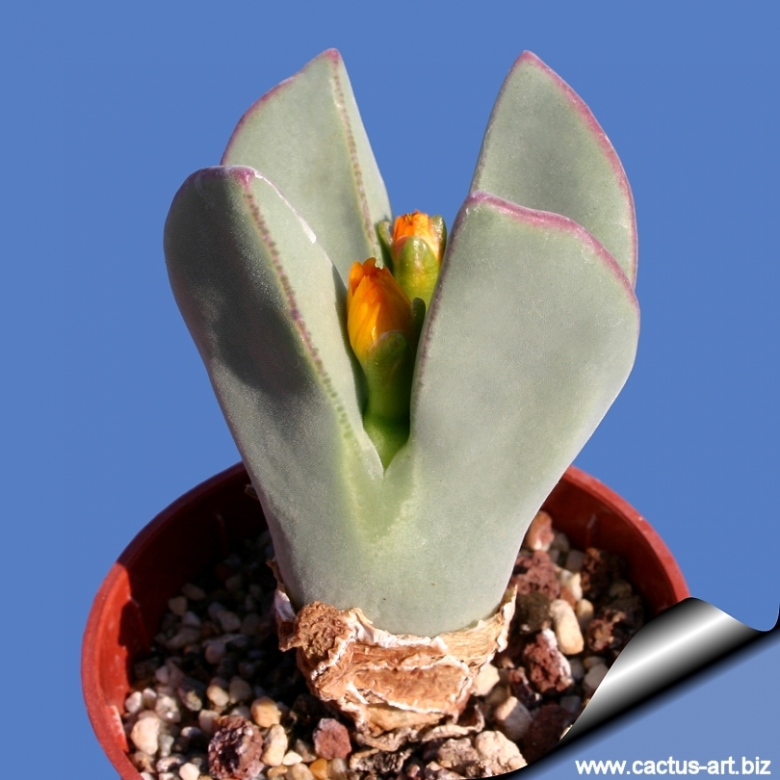 Conophytum christiansenianum Photo by: Cactus Art
Grey to blue-green plants with two lobes and large yellow flowers. It is among the easiest species to grow.

Origin and Habitat: Namaqualand.
Habitat: Growing in a well drained soil with some water in winter and some sun.

Description: Conophytum christiansenianum is one of the varieties of Conophytum bilobum which is a somewhat variable taxon with several collected extreme forms that were early published as full species or as varieties, but these were too weak botanically to stand, so they are all combined in Conophytum bilobum. Conophytum christiansenianum is a robust caespitose plant, distinguished by larger bodies up to 7 cm tall, 3 cm wide, leaf-tips free, 10-40 mm long, triangular and keeled. It is stemless or short stems develop with time.
Bodies (paired leaves): Thickness: 3 centimetres Height: 7 centimetres.
Profile: The leaf-tips (lobes) are free and are 10-40 mm long and triangular in shape and keeled.
Colours: The margins are green to red or deep purple in colour. The epidermis is slightly velvety, it is whitish-green to glaucous-blue green
Flower: Scentless up to 3 cm (The largest of the genus)
Blooming season: The flowers are autumnal (rarely in summer) and diurnal.
Remarks: This plant is one of the innumerable form of Conophytum bilobum which is one of the most widespread and morphologically variable taxon. 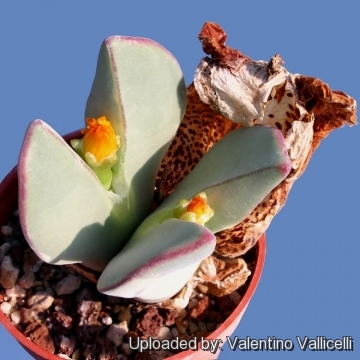 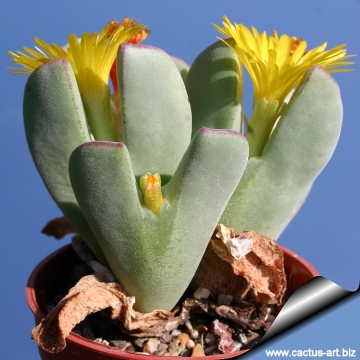 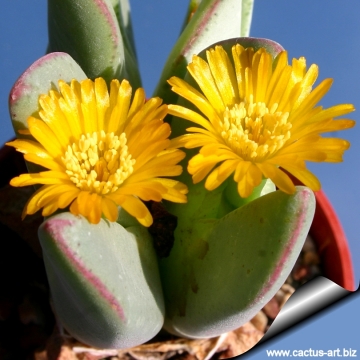 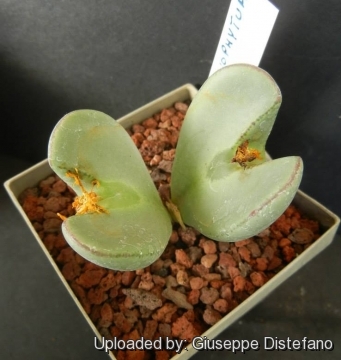 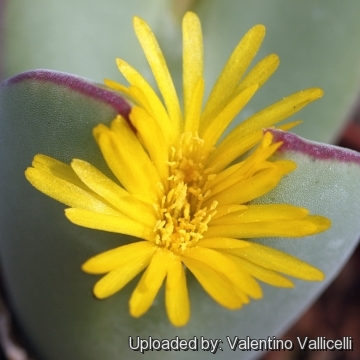 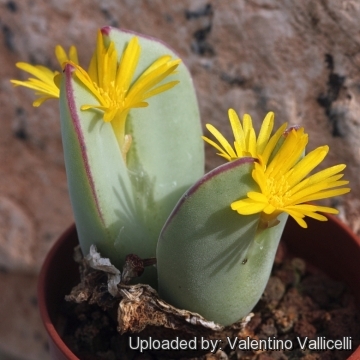 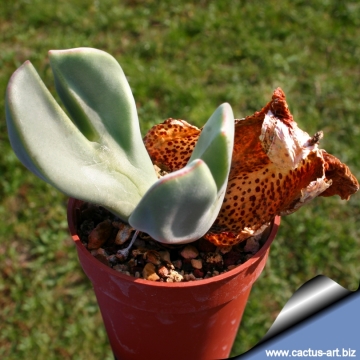 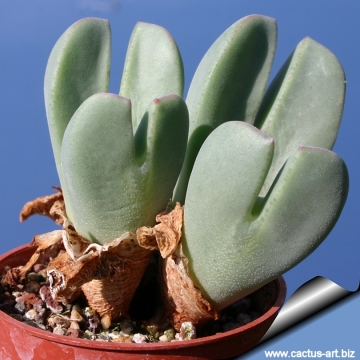 Cultivation and Propagation: Conophytum quaesitum is a "winter" grower which is most active from late winter until later spring and heading for summer dormancy, but in favourable growing conditions it keeps going over the summer too and doesn't need particular care. It is relatively easy to grow.
Soil: Requires good drainage as it it is prone to root rot. It can grows outdoor in sunny, dry, rock crevices (protection against winter wet is required) It can also be cultivated in alpine house, in poor, drained soil.
Watering: It requires little water; otherwise its epidermis breaks (resulting in unsightly scars). Water minimally in summer, (only when the plant starts shrivelling), but it will generally grow even in summer if given water. Water regularly in winter after the previous year's leaves have dried up. Requires good drainage.
Fertilization: Feed it once during the growing season with a fertilizer specifically formulated for cactus succulents (poor in nitrogen), including all micro nutrients and trace elements diluted to ½ the strength recommended on the label. It thrives in poor soils and need a limited supplies of fertilizer to avoid the plants developing excess vegetation, which is easily attacked by fungal diseases.
Exposure: Keep cool and shaded in summer, it needs full sun or light shade.
Temperature: Hardy to -2°C. Ensure a very good ventilation.
Repotting: Avoid to repot frequently. This plant may stay in the same pot for many years.Uses: Container, rock garden.
Pests and diseases: It is vulnerable to mealybugs and rarely scale.
Propagation:: It can be reproduced both by cuttings and seeds. Take the cutting from a grown-up mother plant. Each cutting must contain one or more heads along with a fraction of root. It is easily propagated by seed.