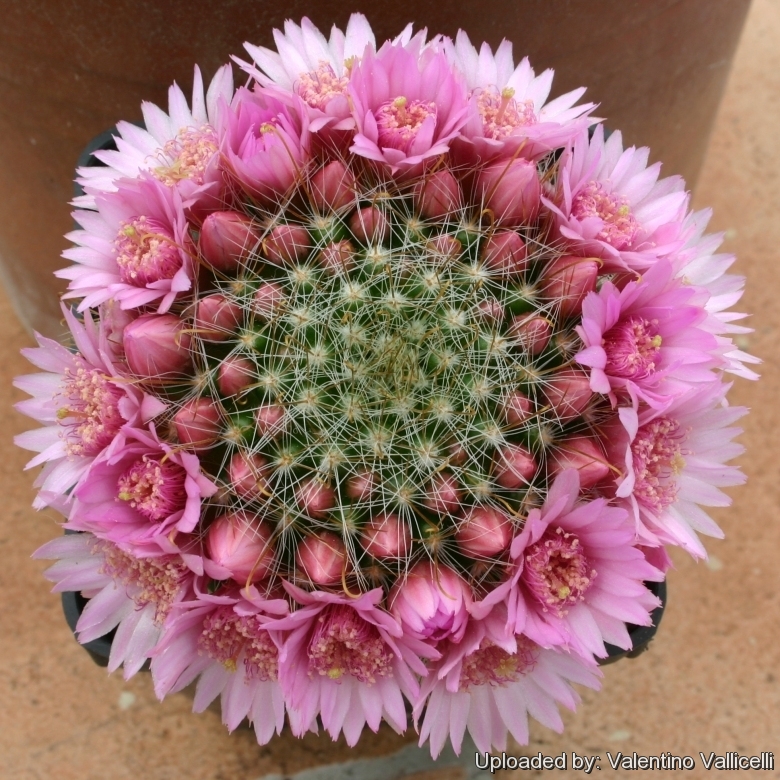 Mammillaria zeilmanniana Photo by: Valentino Vallicelli
This is a popular species with flowers typically carmine violet to purple-pink in color, seldom white. It is one of the most prolific bloomers among the Mammillarias.

Origin and Habitat: Mammillaria zeilmanniana, is found at a single location, at San Miguel de Allende in Cañada Virgen, Guanajuato state, central Mexico (extent of occurrence and area of occupancy less than 1 km2).
(Until 1988 Mammillaria zeilmanniana had never been found in its natural habitat by anyone else since its original discovery in the late 1920's by Erich Georgi of Saltillo, a collector and exporter of exotic plants. It was then re-discovered after a long search in a canyon complex west of San Miguel de Allende in Mexico thriving in an isolated microenvironment.)
Altitude range: It grows at around 1700-1950 metres above sea level
Habitat: Grows in a very restricted area in a narrow passage with sheer volcanic rock (igneous), large deciduous trees and flowing water offered shade and humidity in an otherwise very dry environment. It roots grow in the thin layer of moss and fern growth that covered the lower, shaded vertical rock that formed the canyon side. It is listed as Critically Endangered because it has a very small population size (less than 250 mature individuals)and an extremely restricted range. The number of mature individuals is declining because of illegal collection. This species is collected by cactus enthusiasts for use as an ornamental. It is cultivated commercially for the international trade.

Description: Mammillaria zeilmanniana (Mammillaria crinita f. zeilmanniana) is a popular cactus species with flowers typically carmine violet to purple-pink in color, seldom white. In cultivation it is heavily clustering. (while in its natural environment it is often simple and rarely branching).
Taxonomic notes: Considered a synonym of Mammillaria crinita by Anderson (2001) and the assessors. Accepted as a species by Hunt (1999) and Pilbeam (1999). The claimed distinguishing characters of this taxon, fruit color, appear in other populations of M. crinita while the intensity of the flower color is unique. It appears to be no more than a form albeit a very popular one.
Stems: Glossy green, spherical or oval to short cylindrical, 6-12 cm high, 4.5-8 cm in diameter.
Tubercles: Oval (Tubercle arrangement: 13-21).
Areoles: Woolly when young. The axil is naked.
Radial spines: About 15-18, radiating, finely bristly or hairlike white, pubescent.
Central spines: 4, the upper 3 straight, the lowest hooked, slightly longer than the radials, reddish brown.
Flowers: Up to 2 cm, pale pinkish violet or purple, stigmas yellowish. (The white flowered sport of M. zeilmanniana is produced in cultivation and not known to occur in the wild)
Blooming season: The flowers can come at any time of the year.
Fruits: Whitish green to pale pink.
Seeds: Black. 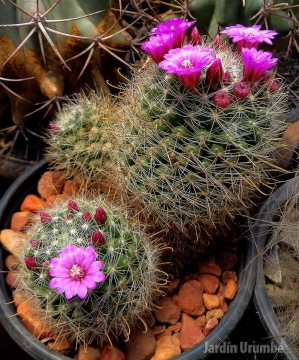 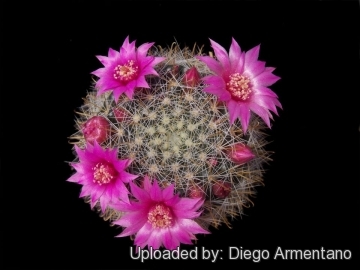 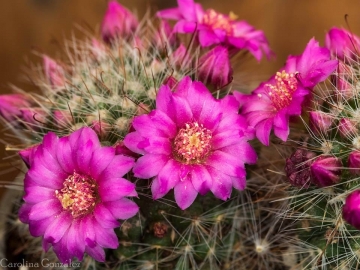 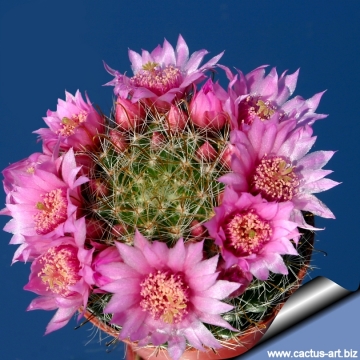 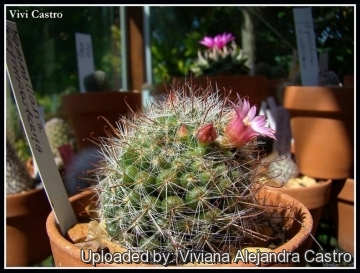 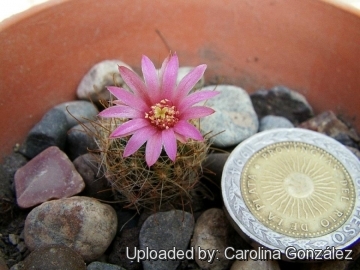 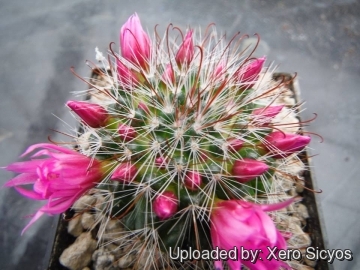 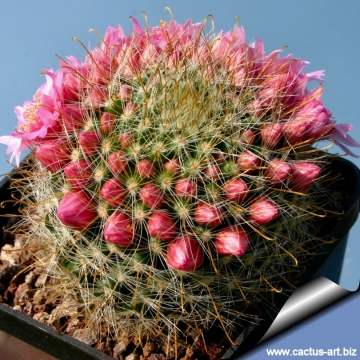 Cultivation and Propagation: Mammillaria zeilmanniana is an easy species in cultivation. Most plants will offset readily, and clumps can be produced in a very few years given the best conditions.
Growth rate: It is a small growing, but easily flowering species.
Soils: It likes very porous standard cactus mix soil.
Repotting: Repotting every 2-3 years. It will need a pot with sufficient depth to allow the tap root. Use pot with good drainage.
Watering: Water regularly in summer, but do not overwater (Rot prone), keep dry in winter. In winter keep the Mammillaria in a very dry place with ample airflow, no humid atmosphere!
Fertilization: During the growing season enrich the soil using a fertilizer rich in potassium and phosphorous, but poor in nitrogen, because this chemical element doesn’t help the development of succulent plants, making them too soft and full of water.
Hardiness: Reputedly sensitive to frost , but less so if kept on the dry side prior to, and during, cold weather (hardy to -5° C for short periods, but some reports give it hardy to -12°C). However some warmth throughout the year will increase the grower's success (minimum 5° to 8°C during rest season).
Exposition: Outside bright sun, filtered sunlight or afternoon shade, inside it needs bright light, and some direct sun. Subject to sunburn if exposed to direct sun for too long. Tends to bronze in strong light, which encourages flowering and heavy wool and spine production.
Uses: It is an excellent plant for container growing. It always looks good and stays small. It look fine in a cold greenhouse and frame.
Pests & diseases: It may be attractive to a variety of insects, but plants in good condition should be nearly pest-free, particularly if they are grown in a mineral potting-mix, with good exposure and ventilation. Nonetheless, there are several pests to watch for:
- Red spiders: they may be effectively rubbed up by misting the vulnerable plants every day
- Mealy bugs: Easily they develop aerial into the new growth among the wool with disfiguring results, but the worst types develop underground on the roots and are invisible except by their effects.
- Sciara Flies: they are one of the major problems for seedlings. It is a good practice to mulch your seedlings with a layer of grit, which will strongly discourage the flies.
- Scales: they are rarely a problem.
It is wise to treat your whole collection with a systemic insecticide twice a year in spring and autumn.
- Rot: it is only a minor problem with mammillaria if the plants are watered and “aired” correctly. If they are not, fungicides won't help all that much.
Propagation: Direct sow after last frost or (rarely) cuttings. Seeds germinate in 7-14 days at 21-27° C in spring, remove the glass cover gradually as the plants develops and keep ventilated, no full sun for young plants! To make a cutting twist off a branch and permit it to dry out a couple of weeks, lay it on the soil and insert the stem end partially into the soil. Try to keep the cutting somewhat upright so that the roots are able to grow downward.

by Cactus Art
There are a total of 16 Photos.
Click here to view them all!
Cite this page: "Mammillaria zeilmanniana" Text available under a CC-BY-SA Creative Commons Attribution License. www.llifle.com 14 Nov. 2005. 05 Feb 2023. </Encyclopedia/CACTI/Family/Cactaceae/8915/Mammillaria_zeilmanniana>