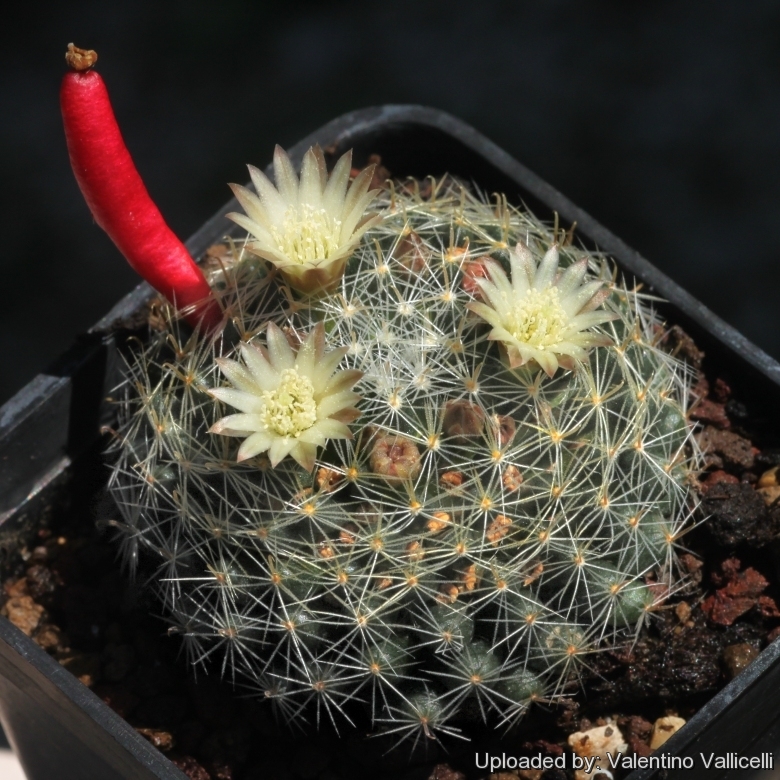 Origin and Habitat: San Luis Potosi, Mexico.
Type locality: North of the city of San Luis Potosi.
Habitat: It was found on volcanic rocks where the population became extinct after destruction of the habitat.

Description: Mammillaria tezontle is a minuscule cactus with delicate near harmless feathery spines densely wrapped against the body of the plant. Hunt has been subsumed it into the broader definition of Mammillaria crinita, but is nevertheless a distinctive taxon with its rather neat, short, yellow central spination and relatively large flowers.
Habit: Usually solitary barely rising above ground level.
Stems: Flattened- globose, depressed apically, soft, dark green,10 mm high, 15-20 mm in diameterand it has clear sap.
Roots: Thick fibrous.
Axil: With wool and occasionally bristles.
Radial spine: 14 to 20, yellowish white, slightly pubescent, 3-5 mm long spreading and interlacing.
Central spine: 1 to 4, of which one or more hooked, 3-4 mm long, yellowish white, thin, acicular and slightly pubescent.
Flower: Funnel-form, yellowish white often with a darker brownish midrib toward the tips , 10 mm long, 15 mm across. Filaments and anthers pale cream-yellowish, style and stigma lobes greenish.
Blooming season: Flowers readily, and for a long period from spring to the early summer.
Fruit: Green, elongated.
Seed: Blackish brown.
Remarks: The dense covering of spines reduces the interception of solar radiation by the stem surface lowering the risks of overheating the apex during a summer day and of freezing during a winter night. 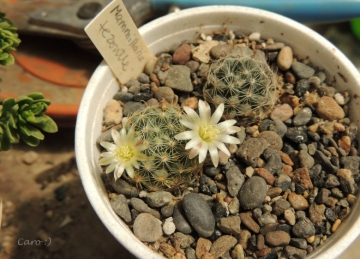 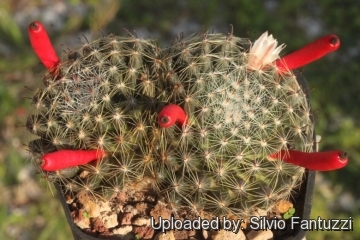 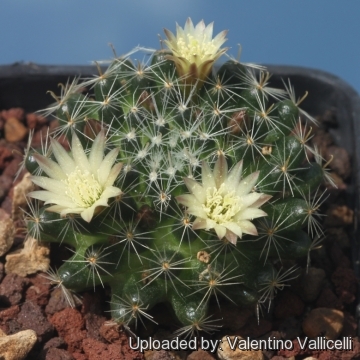 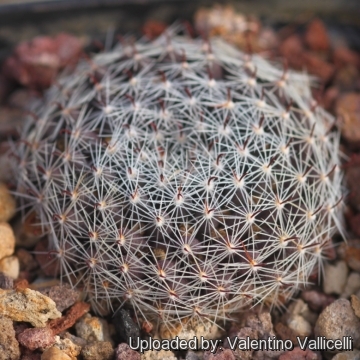 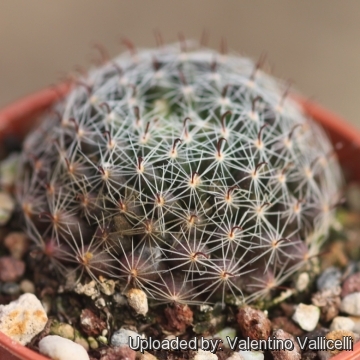 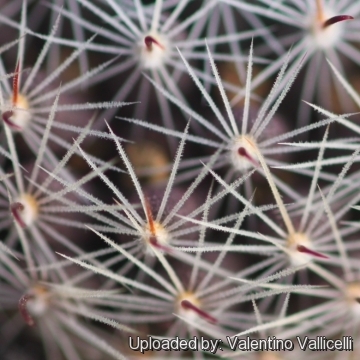 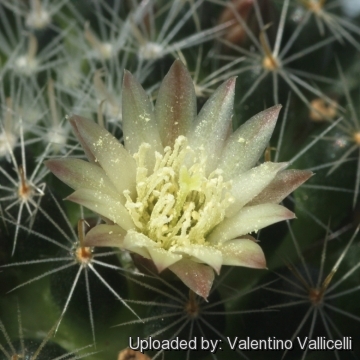 Mammillaria tezontle Photo by: Valentino Vallicelli
Send a photo of this plant.

Cultivation and Propagation: Is one of the dwarf feathery Mammillaria, somewhat difficult to cultivate and like many such species, offers a challenge to the grower. During the summer it is best to keep the plants outside where the temperature can rise to over 30° C with no harm to the plant, recommended for any collection that needs lots of light with ample airflow.
Growth rate: It is a small growing, but easily flowering species.
Soils: Use a an open and free draining mineral compost with little organic matter (peat, humus) that allows therefore roots to breath (as it is rot prone).
Repotting: Repotting every 2-3 years. Use a small pot with good drainage.
Watering: It likes a winter's rest and should be kept almost completely dry during the winter months, If the soil is allowed to be dry for too long root loss could follow but equally the same result would occur if the plants are both wet and cold. From March onwards the plant will begin to grow and watering should be increased gradually until late May when the plant should be in full growth. Water regularly during the summer so long as the plant pot is allowed to drain and not sit in a tray of water. During hot weather you may need to water the plants more frequently so long as the plant is actively growing. From late September watering should be reduced to force the plant to go in to a state of semi dormancy, by October you should be back in to the winter watering regime. Keep dry with ample airflow in winter. In the rest period no high atmospheric humidity!! Care must be taken with watering as they tends to become swollen and untidy in growth habit if given too much water and shade.
Fertilization: Feeding may not be necessary at all if the compost is fresh then, feed in summer only if the plant hasn't been repotted recently. Do not feed the plants from September onwards as this can cause lush growth which can be fatal during the darker cold months. .
Hardiness: Grown specimens resist to -4°C for a short time, but it is best to keep above 5° C to avoid ugly spots on the plant epidermis. Some warmth throughout the year will increase the grower's success.
Exposition: Need full sun avoiding only the harshest summer sun, if kept too dark they may become overly lush and greener and could be prone to rotting due to over watering. Tends to bronze in strong light, which encourages flowering and heavy wool and spine production.
Uses: It is an excellent plant for container growing. It always looks good and stays small. It look fine in a cold greenhouse and frame.
Pests & diseases: It may be attractive to a variety of insects, but plants in good condition should be nearly pest-free, particularly if they are grown in a mineral potting-mix, with good exposure and ventilation. Nonetheless, there are several pests to watch for:
- Red spiders: Sensitive to red spider mite. Overhead watering is helpful in controlling mites.
- Mealy bugs: Occasionally mealy bugs they develop aerial into the new growth among the wool with disfiguring results, but the worst types develop underground on the roots and are invisible except by their effects.
- Scales: Scales are rarely a problem.
- Rot: Rot it is only a minor problem with cacti if the plants are watered and “aired” correctly. If they are not, fungicides won't help all that much.
Propagation: Propagation: Direct sow after last frost. (seldom produces offsets). Seeds germinate in 7-14 days at 21-27° C in spring, remove the glass cover gradually as the plants develops and keep ventilated, no full sun for young plants! The seedlings should not be disturbed until they are well rooted, after which they can be planted separately in small pots.