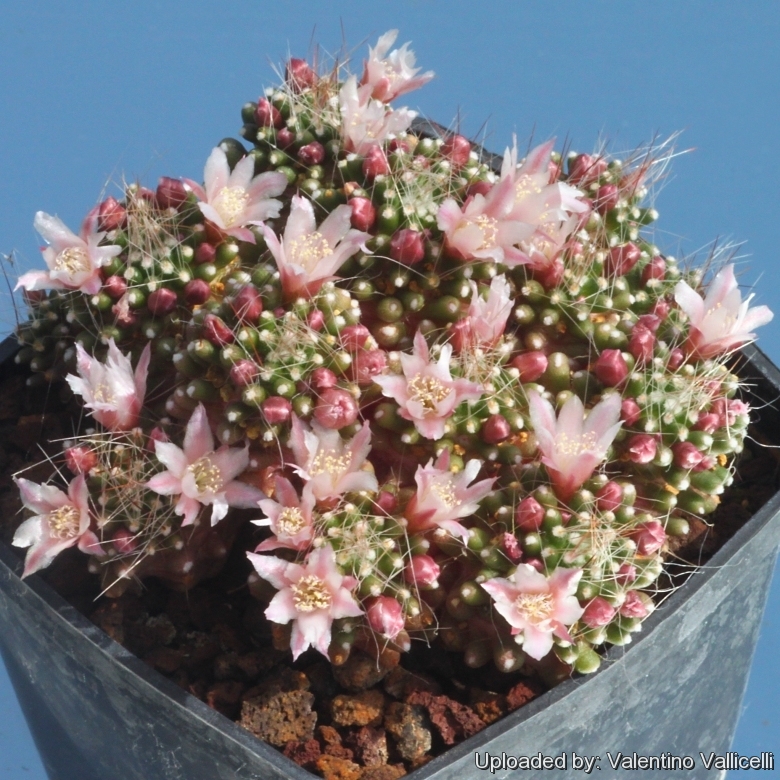 Description: Usually this Mammillaria crinita forma monstruosa is offered with the incorrect name of Mammillaria painteri (monstrous form). It is a well known cultivar characterized by very reduced bristly or absent spines, free branching, and small pink flowers.
Habit: It is a small low growing plant that offsets from the base to form a small cluster or mound.
Stem: Globose, dark green, about 2-8 high and cm in diameter, the monstrous form can eventually grow to be larger than the normal Mammillaria painteri.
Tubercles: Conical or cylindrical, not compacted, usually without bristles in their axils, and without latex.
Radial spines: up to 6 but usually less and often absent, white, very thin, hair-like, inconspicuous.
Central spines: Usually absent, or occasionally one, bristly, very thin, redish-brown and erect.
Flowers: Narrowly funnel-shaped 15 mm long, light pink not opening widely, the outer segments brownish; inner perianth-segments broad, with an ovate acute tip; stamens white; stigma-lobes cream-coloured.
Fruits: Globose to ovate, green to bright red.
Seeds: Brownish black, coarsely pitted.
Remarks: The flowers of plants grafted on Opuntia humifusa are not only very abundant but also reach a whole maturation and open to a splendid blossoming. In comparison the flowers of plants on their own roots and on different grafting stocks are smaller, imperfect, and usually fail to open completely.

Notes: Mammillaria crinita ssp. crinita "mostruosa" looks almost identical to Mammillaria cv. Caterpincy. We do not exclude that the two different named cultivars might be the same. 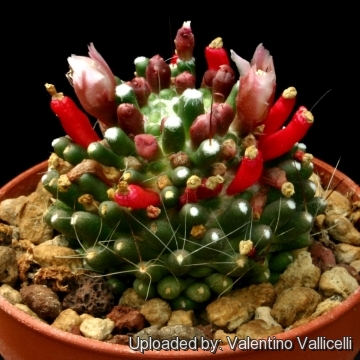 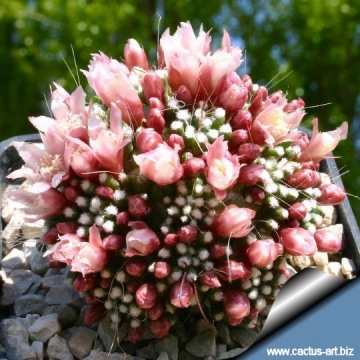 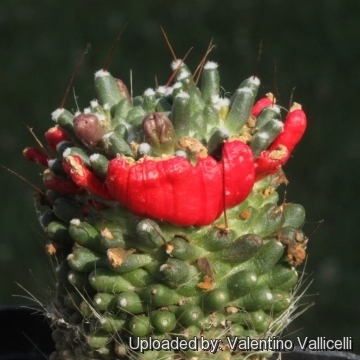 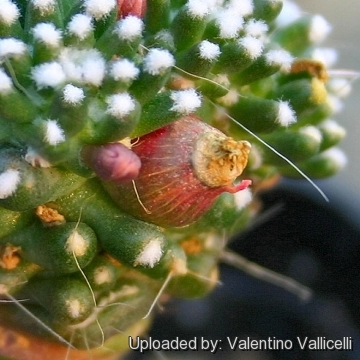 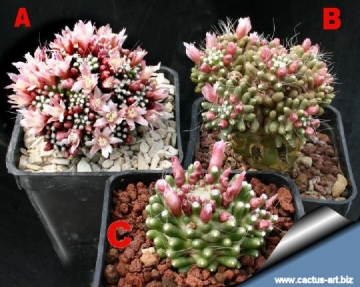 A) grafted on Opuntia Humifusa, B) grafted on Trichocereus, C) On its own roots Photo by: Cactus Art 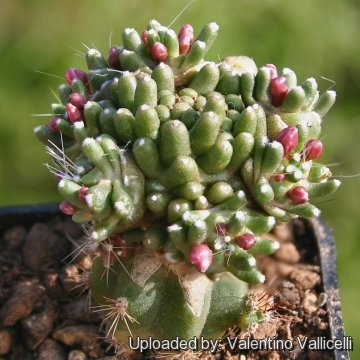 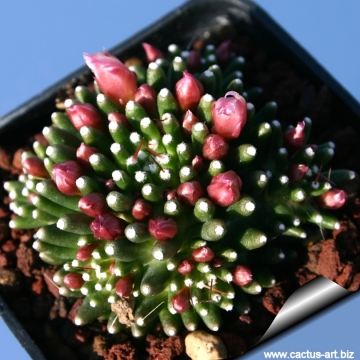 Cultivation and Propagation: Mammillaria crinita subs. painteri f. monstruosa is an easy species in cultivation, recommended for any collection that needs lots of light with ample airflow.
Growth rate: It is a small growing, but easily flowering species. It takes several years to offset, but once it starts it can fill a 25 cm pot in just a few years given the best conditions.
Soils: It likes very porous standard cactus mix soil with little organic matter (peat, humus).
Repotting: Repotting every 2-3 years. It will need a pot with sufficient depth to allow the tap root. As it is especially prone to rot under-pot in a smaller container filled with very porous compost. Use pot with good drainage.
Watering: Water regularly in summer, but do not overwater (very wet-sensitively, especially in light of its succulent root system). Its roots are easily lost in pots that stay damp for any length of time. Keep dry with ample airflow in winter. In the rest period no high atmospheric humidity!! Care must be taken with watering as they tends to become swollen and untidy in growth habit if given too much water and shade.
Fertilization: During the growing season enrich the soil using a fertilizer rich in potassium and phosphorous, but poor in nitrogen, because this chemical element doesn’t help the development of succulent plants, making them too soft and full of water.
Hardiness: Reputedly sensitive to frost , but less so if kept on the dry side prior to, and during, cold weather (hardy to -5° C for short periods, but some reports give it hardy to -12°C). However some warmth throughout the year will increase the grower's success (minimum 5° to 8°C during rest season).
Exposition: Outside bright sun, filtered sunlight or afternoon shade, inside it needs bright light, and some direct sun. Subject to sunburn if exposed to direct sun for too long. Tends to bronze in strong light, which encourages flowering and heavy wool and spine production.
Uses: It is an excellent plant for container growing. It always looks good and stays small. It look fine in a cold greenhouse and frame.
Pests & diseases: It may be attractive to a variety of insects, but plants in good condition should be nearly pest-free, particularly if they are grown in a mineral potting-mix, with good exposure and ventilation. Nonetheless, there are several pests to watch for:
- Red spiders: Sensitive to red spider mite. Overhead watering is helpful in controlling mites.
- Mealy bugs: Easily they develop aerial into the new growth among the wool with disfiguring results, but the worst types develop underground on the roots and are invisible except by their effects.
- Sciara Flies: they are one of the major problems for seedlings. It is a good practice to mulch your seedlings with a layer of grit, which will strongly discourage the flies.
- Scales: they are rarely a problem.
It is wise to treat your whole collection with a systemic insecticide twice a year in spring and autumn.
- Rot: it is only a minor problem with mammillaria if the plants are watered and “aired” correctly. If they are not, fungicides won't help all that much.
Propagation: Direct sow after last frost or (rarely) cuttings. Seeds germinate in 7-14 days at 21-27° C in spring, remove the glass cover gradually as the plants develops and keep ventilated, no full sun for young plants! The seedlings should not be disturbed until they are well rooted, after which they can be planted separately in small pots. Cuttings: wait until the offsets that appear at the base of old clustered specimens are 1/3 the size of the parent and then detach and plant. Cuttings will take root in a minimum temperature of 20° C (but better in hot weather). Cuttings of healthy shoots can be taken in the spring and summer. Cut the stem with a sharp, sterile knife, leave the cutting in a warm, dry place for a week or weeks (depending on how thick the cutting is) until a callus forms over the wound. Once the callus forms, the cutting may be inserted in a container filled with firmed cactus potting mix topped with a surface layer of coarse grit. They should be placed in the coarse grit only; this prevents the cut end from becoming too wet and allows the roots to penetrate the rich compost underneath. The cuttings should root in 2 to 6 weeks.