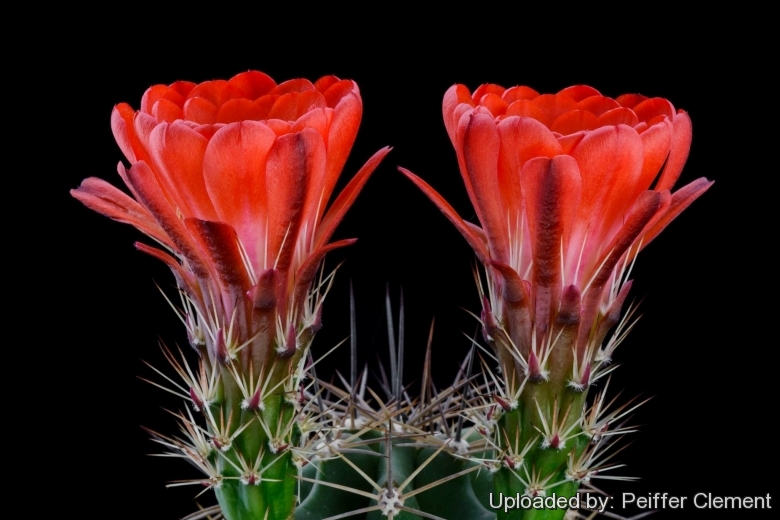 Origin and Habitat: This cactus is found in a wide band from central Texas west through Big Bend; northeastern limit near Lampasas, Texas; southeastern limit near Kerrville, Texas; westward past Del Rio, south to Davis Mountains; southern limit takes in all of Big Bend, but reported from New Mexico and Utah too.

Description: Echinocereus triglochidiatus var. octacanthus, frequently seen listed in nursery catalogues, is a doubtful species not easily distinguished by Echinocereus triglochidiatus. It seems to be vegetatively distinct from other recognised forms but with the typical orange-red blooms that are common to all Echinocereus triglochidiatus and its varieties. It is a cespitose cactus, with many simple joints, sometimes to 50.
Stems: Globular, ovoid, or cylindrical, loosely clustered, bright green or yellowish green, plump, with shiny surfaces 7 to 10(-12.5) cm long in northern range, 22-30 cm in southern part, 5 to 7(-12) cm in diameter.
Ribs: 7 to 9, obtuse, shallow, somewhat tubercled, only slight cross-furrows between areoles.
Areoles: Round, when young white-woolly, about 4-5 mm across, 8 to 16(-40) mm apart, in age naked and entirely filled by swollen bases of spines.
Spines: Rigid, round, straight, with very bulbous bases, yellowish to greyish brown, often with red streaks and shadings, especially toward bases.
Radial spines: (3-)7 or 8(-9), 10 to 24(-35) mm. Long.
Central spine: Solitary, stouter than the radials, standing out at right angle to stem, 2 to 3.5 cm long.
Flowers: As the species, red, but smaller only 1.2-5 cm long, remaining open for several days. Petals short, blunt. Ovary tube almost without no wool, with clusters of 2-6 slender spines up to 12 mm long. Stigma lobe 5 to 8 light green.
Fruits: Round, smooth, red, 12-18 mm in diameter; naked when ripe.

Notes: Plants growing in the northeastern region have a weak growth due to wetter climate, while the spines in western range are more uniformly dark gray, and the plants are more resistant to rot than most others in this genus.