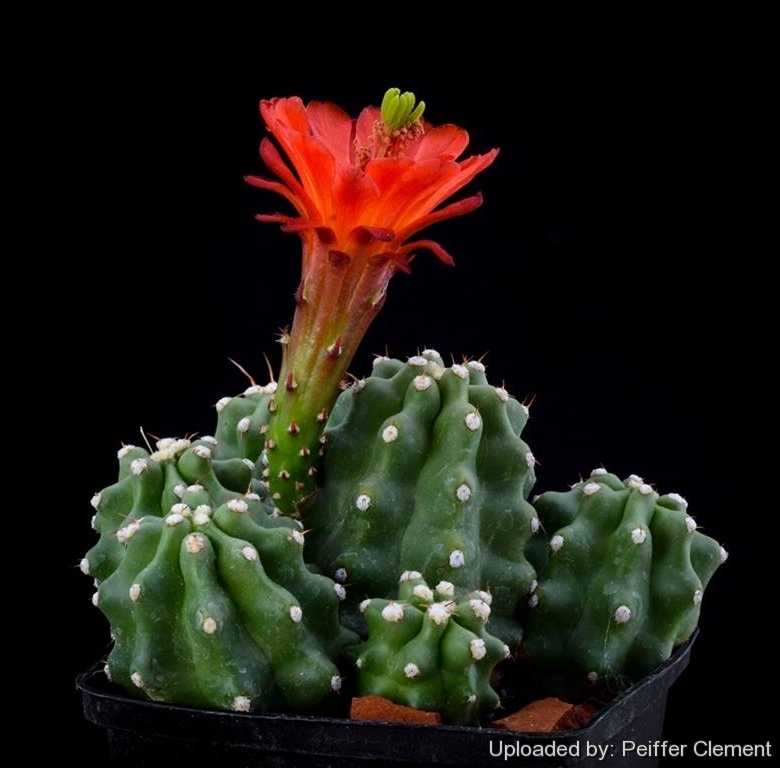 Origin and Habitat: Southern California to Colorado, and southern Nevada, southwestern Utah, northwestern Arizona, south through California and northeastern Baja California, Mexico. Plants in the western portion of the range of Echinocereus triglochidiatus are known as Echinocereus triglochidiatus var. mojavensis. In habitat occasional spineless specimens (fma. inermis) occur throughout the range of the species together with the normal spiny form, and intermediate forms are also common. Small populations with prevalently spineless individuals are mainly found in the mountains and mesas of western Colorado and eastern Utah. On these plants, areoles may have very few spines, and some stems can be almost completely spineless. But the same plant will have spined stems and many spines per areole in another area.
Elevation range: About 1300-3000 metres above sea leve.
Habitat: Mojave desert, chaparral. It is a fairly common component of vegetation communities on dry, well-drained gravelly and rocky soils. Sometimes the plants grow in sand-stuffed rock cracks. Such plants are small, and only have several stems. The plants growing by shady rocks and bushes looks much stronger. Echinocereus mojavensis is primarily pollinated by hummingbirds.

Description: Echinocereus triglochidiatus var. mojavensis f. inermis is the nice spineless form of Echinocereus triglochidiatus var. mojavensis. These plants varies from pure nude specimens to plants with more or less short spines (partially nudum), all the other characteristics namely size and shape of stems, flowers, fruits, roots etc. clearly show that they are conspecific.
Habit: This is one of the most interesting cacti, that often forms large clumps. Multiple heads are produced as the plant ages and can form a very large, densely packed, mound more than a half a meter in diameter, with more than a hundred heads (but large mounds with 500-800 heads have been reported).
Stems: Usually erect, globose to cylindrical up to about 5-45 cm tall, each usually less than about 5 cm in diameter, pale green to bluish green.
Ribs: 8 to 14, 5 to 6 mm high, but becoming indistinct on old parts of stem, somewhat undulate, slightly tuberculate and expanded at areoles.
Areoles: White felted, young areoles circular, 10-40 mm apart.
Spines: Absent or very short, not distinguishable from radials to centrals, white, or in age grey, round in cross section, curved (almost wavy), twisting and not interlocking with those of neighboring stems.
Flowers: The heavy and waxy flowers, emerging from near the tip of individual stems, are red or orange with green stigma in the centre. Flowers are rather narrow, funnel-shaped, and about 5-7(-9) cm long. A particularity of this plant is that the flower buds emerge through the plant's skin above an areole, leaving a scar after fading, rather than arising from areoles or axils between areoles as in other cacti.
Blooming season: Late spring (April—June). The flowers last a few days.
Fruit: Oblong to cylindrical, about 2-3.5 cm long, 1,5 cm in diameter. Green or yellow-green, reddish when ripe, spines deciduous. Juicy and edible, pulp white. Fruiting 2-2.5 months after flowering. 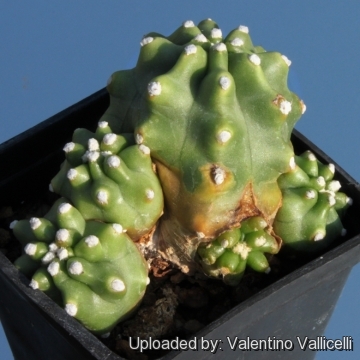 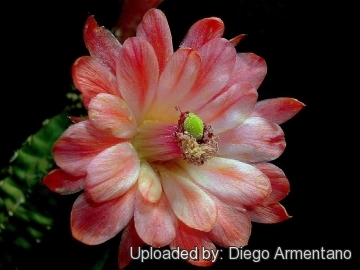 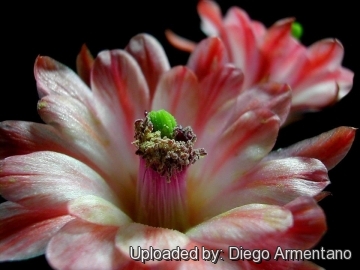