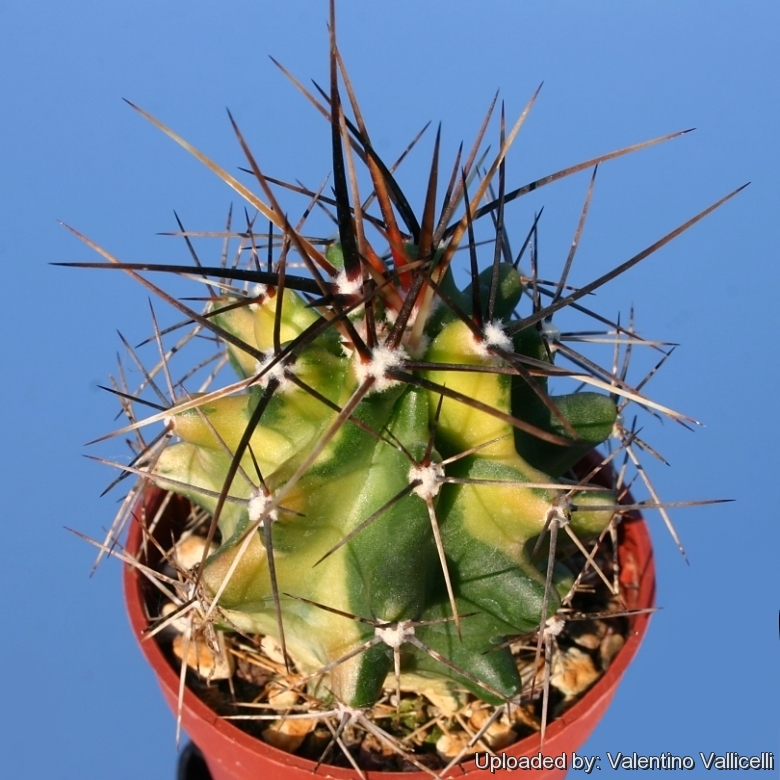 Description: The Echinocereus triglochidiatus is a mounding cactus, forming bulbous piles of from a few to hundreds of spherical to cylindrical stems. Plants may vary from densely spiny (usually) to no spines at all. E. triglochidiatus is the most wide-spread of the Echiniocereus species and is also the most variable in appearance. I n fact, the several varieties are so different-looking that the only uniting factor is the bright red bloom and rounded petals.
Stems: Usually erect , spherical or cylindrical, 3-70 cm tall, 5-13 cm in diameter;
Ribs: 5-8 or 8-12, crests slightly undulate (some populations contain plants with strongly interrupted ribs);
Areoles: 10-40 mm apart, and somewhat woolly.
Spines (0-)3-11 per areole, with central spines being difficult to distinguish from the radial spines. Straight to curved or contorted, appressed (radial spines) or spreading to projecting outward (some radials, and central spines when present), white to yellow, gray, or sometimes nearly black, but those turn whitish-grey after their first season.
Radial spines: (0-)1-10 per areole, (0-)15-90 mm long; Spines are at first yellow, pink or black.
Central spines: 0-1(-4) per areole, angular, (0-)50-120 mm long.
Flowers: Diurnal, funnel-shaped, 5-10 × 3-7 cm; flower tube 20-35 mm; flower tube hairs 1-2 mm; inner tepals bright orange-red to dark red, proximally paler (bases sometimes yellow or white), 25-40 × 10-15 mm, tips thick and rigid; anthers usually pink to purple. There is a thick nectar chamber and many thready pink stamens at the center of the corolla. The flowers are pollinated by hummingbirds.
Fruits: Juicy, with deciduous spines, and edible, green to yellow-green or pink (rarely red), (15-)20-35 mm, pulp white, fruiting 2-2.5 months after flowering...
Blooming season: Apr-June, the flowers remain open for 2 or 3 days. Blooming generally begins 5 to 10 years after sowing, as the plant matures.

Notes: Variegation, albinism & schizochromism. A variegated plant has sectors, patches or stripes with two or more different colours, even distinct shades of green. Plants with variegated stems or leaves are often attractive and highly prized. In most species the stems or leaves are normally green, and variegated epidermis is an uncommon mutation, termed a chimera. A chimeral variegation is due to losing the ability to produce chlorophyll in some of the plant’s tissue, so that this tissue is no longer green. Tissues lacking chlorophyll are usually white or pale yellow coloured (due to carotenoid pigments) or red (due to betalain or anthocyanin pigments) contrasting with the normal green tissue. There are several forms of variegation, depending on the tissues that have been affected. The variegation in some forms is unstable. The extent and nature of the variegation can vary, and sometimes the plant will return to the green form. In others it is stable and does not change under normal conditions. Because the variegation is due to the presence of two kinds of plant tissue, propagating the plant must be by a vegetative method of propagation that preserves both types of tissue in relation to each other.
VariegateEchinocereus s are very rare and priced in cultivation. All variegates are mutants. Something has gone wrong with the cellular structure of the growth tip (apical meristem) of the plant. As a result of this mutation, chlorophyll is missing from some or all layers of the plant epidermis. The odd variegate appears in many seedling batches in a small percentage, and is generally separated from normal plants. Variegated plants grow more slowly, and are generally smaller than non-variegates of the same species. Coloured areas are also generally weaker, and more susceptible to fungus, sunburn and other defects. A large well grown variegate Echinocereus is truly an achievement. These are harder to grow well than they appear. 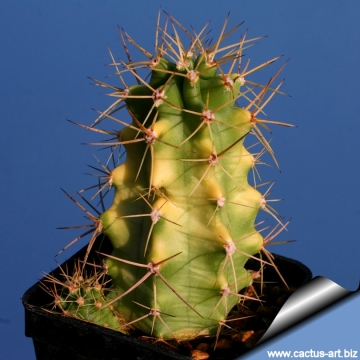 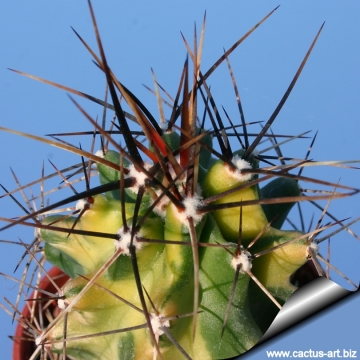