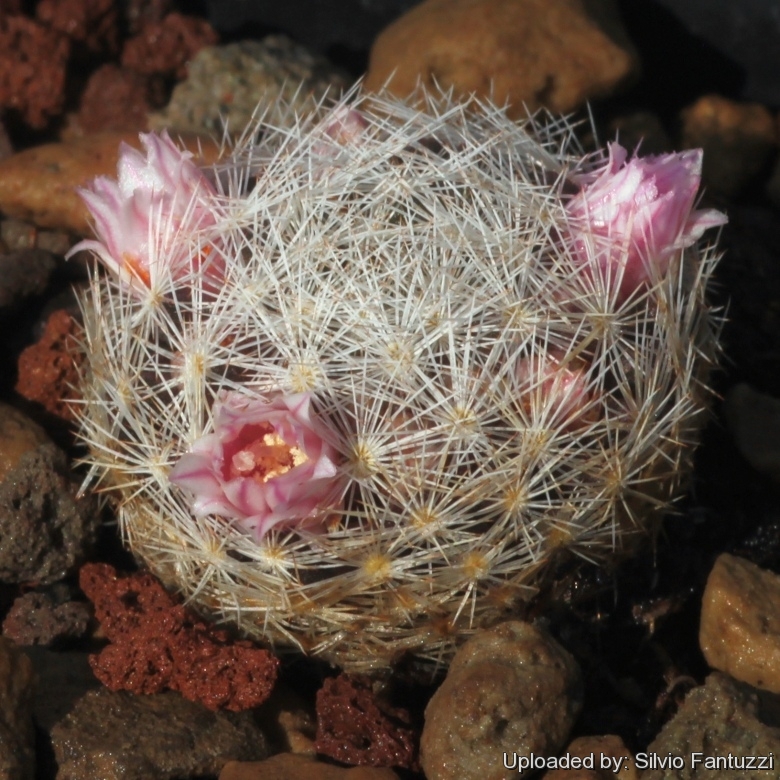 Origin and Habitat: Durango and Lerdo (also Coahuila and Baja California ?), Mexico
Ecology: The dense addpressed spination of Mammillaria roseocentra serves to protect it from the harsh sun common to its native habitat. More precisely the spines benefit the plant by reducing sun exposure and by trapping a layer of air next to the cactus body. This helps to cool the plant in the summer and keep it warm in the winter.

Description: Mammillaria roseocentra is a controversial species considered by Pilbeam a form of Mammillaria magallanii, but the original description of M. roseocentra calls for 25 radial spines only and it is more likely that the name has subsequently been misapplied. It is a small slow growing species with tight, radial spines, in two rows, short, especially the inside one, initially beautiful pink, at the apex almost red then creamy white. It has attractive little creamy-pink blooms and red fruit, and is similar to Mammillaria lasiacantha.
Habit: Plants usually solitary with a succulent tap root. With age it may offset from the base to form a small cluster.
Stem: Without latex, globose, to club shaped, green, to 6 cm tall and 4,5 cm in diameter.
Tubercles: Short-cylindrical, without latex. Axils bare.
Radial spines: About 25, but usually much more numerous, interlacing, 2 - 5 mm long, chalky white to very pale pinkish-brown which are pinkish or reddish towards the growing point.
Central spines: Usually absent.
Flower: Cream coloured with pinkish-red or pinkish-brown midribs, to 10 mm long and in diameter.
Blooming season: Early spring (February–March in habitat).
Fruit: Red and very showy.