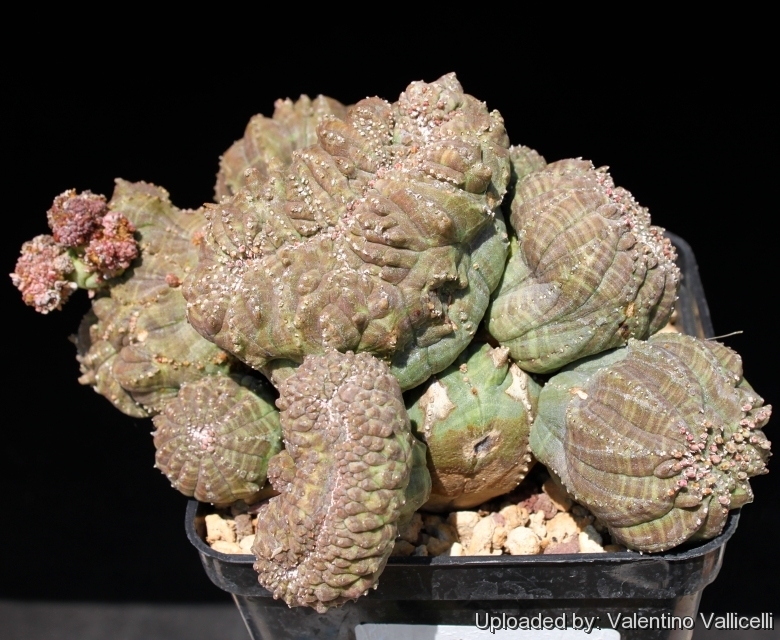 Description: Euphorbia obesa f. monstruosa cristata is name used to indicate a number of clones with different monstrous and crested shapes. The stems slowly branch showing many growing variations, forming irregular mounded clumps often with several heads. This crested forms are rare and sought after by collectors, for their unique features. There are several and variously shaped and sized crested clones. Sometime monstrous and crested shapes are the result of injures or diseases.
Stem: Fan shaped, forming strange, tangled mounds, solid, firm, with a variable width of 2 to 10 cm, grey green, iron-grey, bluish-green or brown-green with very attractive transverse red-brown or dull purplish bands and with finely marked longitudinal seams marking its surface, creating an almost plaid effect.
Ribs: Broad, irregularly shaped, slightly raised with shallow furrows in between.
Leaves: The leaves are very rudimentary, minuscule and soon drop off
Flowers: This Euphorbia is unisexual with the small, greyish green cyathia normally being all male on some plants, or all female on others. Therefore cross pollination between a male and a female plant is required to produce seeds. Pollination usually carried out by insects. All euphorbias have a complex floral arrangement that is termed a cyathium (a cup) and this is the unit of the inflorescence. A cyathium contains many highly reduced male flowers or a single female flower. In Euphorbia obesa, the cyathia appear in summer, from "circular flowering eyes", situated along the tops of the angles, near the growing tip, on the stem. They are produced on fork-branched peduncles (flower stalks), have minute bracts and are finely hairy. The cyathia are cup-shaped to 3 mm in diameter, expanding in the female.The tiny flowers are delicately scented
Fruits: The fruit is a slightly 3-angled capsule , up to 7 mm in diameter that explosively releases the seeds. The peduncles do not persist, and fall off after the seed has been dispersed.
Seeds: Small rounded 2 mm diameter mottled grey when mature. 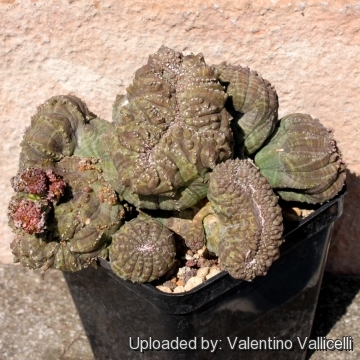 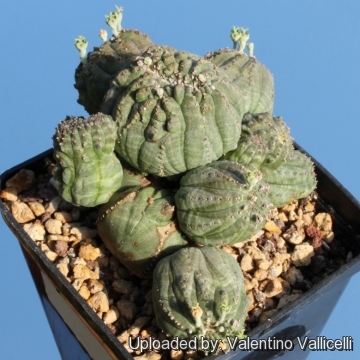