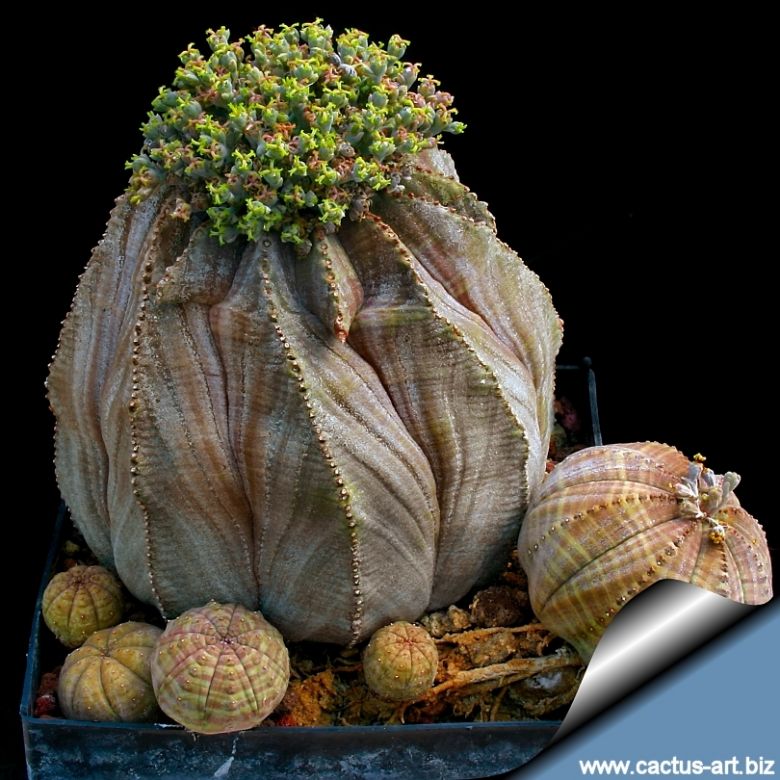 Euphorbia obesa Photo by: Cactus Art
It is a peculiar ball shaped succulent plant that resembles a stone but becomes taller with age.

Origin and Habitat: Euphorbia obesa is an endemic species, found in Kendrew, a small area of the Great Karroo, the Northern Cape region of South Africa, in the Graaff-Reinet district.
Altitude: 300 to 900 metres above sea level.
Habitat: It is found growing in full sun or (more frequently) under the protection of low shrubs and sometime among low boulders in fairly sandy soils. Its colours blend so well with the surroundings that it is often quite difficult to distinguish it. The habitat is very stony and hilly with summer rainfall ranging from 200-300 mm per annum, falling mainly in thunder showers. Summers are very hot: the average daily maximum temperature is about 26 degrees centigrade and the minimum about 11 degrees centigrade. Light frost occurs during the winter months.

Description: It is a highly succulent solitary plant without spines or leaves that looks like a green-brown football, but will sometimes 'branch' or sucker, creating very odd looking clusters of spheres.
Root: Tapering tap root.
Stem: Solid, firm, dome shaped, spherical, or when old twice as high and elongated or cone shaped, up to 20(-30) cm in height with a diameter of 9-10 cm, grey green, iron-grey, bluish-green or brown-green with very attractive transverse red-brown or dull purplish bands and with finely marked longitudinal seams marking its surface, creating an almost plaid effect. Younger plants have a rounded sea urchin-like shape.
Ribs: Usually 8, vertical, broad, slightly raised with shallow furrows in between. But the number of ribs tend to increase as the plant get older (plants with up to ten ribs are reported). Visible on top of the ribs, are minute, brown, ruglose tubercles in a single series.
Leaves: The leaves are very rudimentary, minuscule and soon drop off
Flowers: This Euphorbia is unisexual with the small, greyish green cyathia normally being all male on some plants, or all female on others. Therefore cross pollination between a male and a female plant is required to produce seeds. Pollination usually carried out by insects. All euphorbias have a complex floral arrangement that is termed a cyathium (a cup) and this is the unit of the inflorescence. A cyathium contains many highly reduced male flowers or a single female flower. In Euphorbia obesa, the cyathia appear in summer, from "circular flowering eyes", situated along the tops of the angles, near the growing tip, on the stem. They are produced on fork-branched peduncles (flower stalks), have minute bracts and are finely hairy. The cyathia are cup-shaped to 3 mm in diameter, expanding in the female.The tiny flowers are delicately scented
Fruits: The fruit is a slightly 3-angled capsule , up to 7 mm in diameter that explosively releases the seeds. The peduncles do not persist, and fall off after the seed has been dispersed.
Seeds: Small rounded 2mm diameter mottled grey when mature.
Remarks: Euphorbia obesa is a wonderful example of convergent evolution. In fact it incredibly resembles Astrophytum asterias.

Notes: Euphorbia obesa is dioecious male and female flowers occur on different plants in summer, so a male and a female plant are needed for fecundation. The female has three protruding stigma on which the pollen grains stick, whereas the male has a hairy like center covered with yellow pollen. Once pollinated the female plant produces fruit containing 3 seeds each. 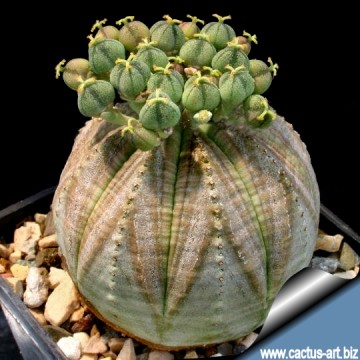 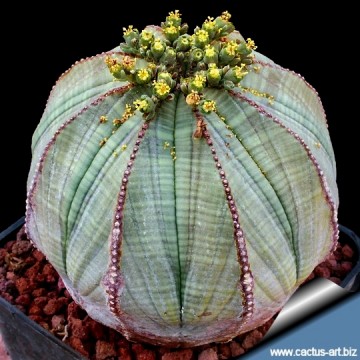 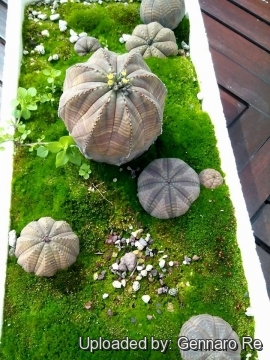 Euphorbia obesa. They receive water when it rains both summer and winter, also the snow, no summer shading. Photo by: Gennaro Re 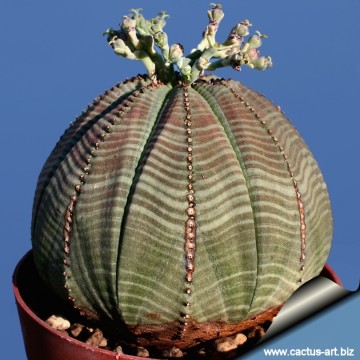 Young plants are dome-shaped or spherical. Photo by: Cactus Art 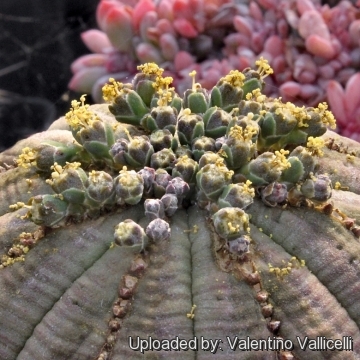 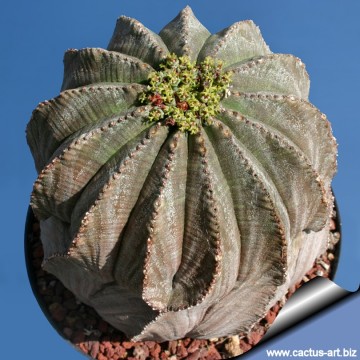 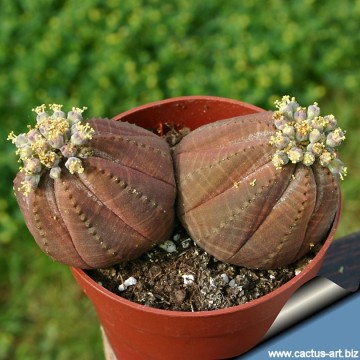 Cultivation and Propagation: It likes a sunny position, but it can also be grown outdoors where the frost is not too severe. It can tolerate temperatures down to -5°C (-10° if the roots are kept dry). It does best in a mineral soil, but is tolerant of a wide range of soil types. Good drainage is essential. Water sparingly during the summer months and keep dry in winter. It is a slow-growing, long-lived plant, and once established, it will be content in its position and with its soil for years. It can tolerate moderate shade, and a plant that has been growing in shade should be slowly hardened off before placing it in full sun, as the plant will be severely scorched if moved too suddenly from shade into sun.
Propagation: It is propagated from seed sown during spring or summer. Germination occurs within 3 weeks, but it can be reproduced by cuttings as well (if available). Flowering can be achieved within 5-8 years.
Warning: As with all other Euphorbias, when a plant get damaged it exudes a thick white milky sap known as latex. This latex is poisonous and may irritate skin

by Valentino Vallicelli
There are a total of 16 Photos.
Click here to view them all!
Cite this page: "Euphorbia obesa" Text available under a CC-BY-SA Creative Commons Attribution License. www.llifle.com 14 Nov. 2005. 19 Aug 2022. </Encyclopedia/SUCCULENTS/Family/Euphorbiaceae/1966/Euphorbia_obesa>