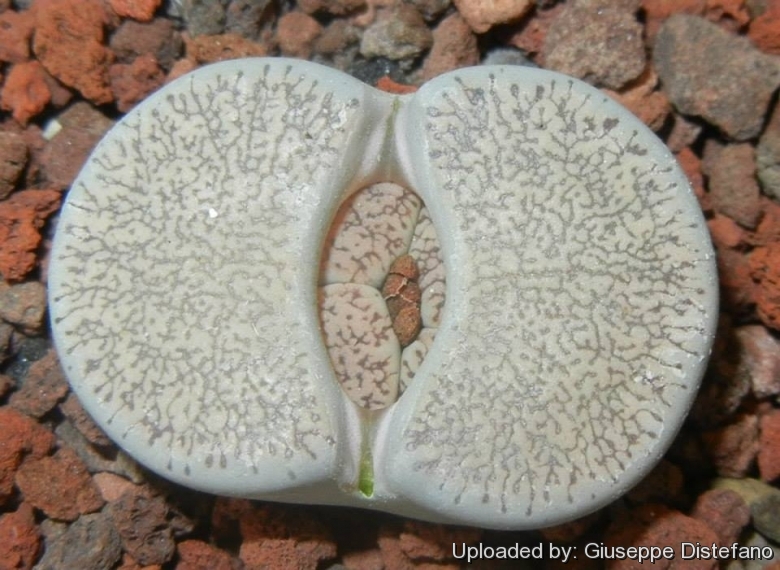 Description: Lithops lesliei var. venteri is one of the local form of the very variable Lithops lesliei that differs in a number of colour characters, but not sufficiently differentiated and often considered merely a local variant of the latter. Its faces typically displays white, grey tops with black denticulate windows, like small worms. In many cases, the windows are black and widely opened. This form was described by de Boer as Lithops lesliei var. maraisii. Most plants don't shows the rusty colouring of the standard Lithops lesliei and tend to have a certain “dusty” or “powdery” appearance and looks looks like limestone with weathered surface. It is among the easiest species to grow, and looks like a flowering brain, with a big, yellow umbrella-shaped daisy flower taking its nourishment from the frontal lobes.
Habit: Growths up to many in a clump (mostly 2 to 5), often more numerous in cultivation.
Stem: Almost stemless.
Roots: It has soft rootstocks.
Bodies (paired leaves): quite large 2-4 cm wide. Each plant consists of a pair of extremely thick and equally or slightly unequally sized leaves fused together and separated by a shallow fissure (2-5 mm) with conjuncted lobes. Top surface slightly convex, slightly rough to the touch or smooth; large transparent window, coloured light brownish red, and in which numerous small islands occur, and in these islands dark-green miniature openings or windows, or the window is irregular in shape, light-green, and sometimes with a light-grey covering. In this covering a number of small round openings, whereby the transparent window becomes visible. In the irregular window a large number of large, grey-coloured islands of irregular shape. In these islands here and there a small number of round openings. Outer margin denticulate or consisting of a large number of irregularly-shaped laciniae connected to the is lands. Inner margin irregular. Both margins coloured grey.
Flowers: A single medium to very large yellow daisy-like flower emerges from the fissure and is as large as the pair of fleshy leaves below. About 3-5 cm wide, diurnal.
Blooming season: From mid-summer through fall.
Capsule: Mostly 5-locular.
Seeds: Light to dark brown, very fine.