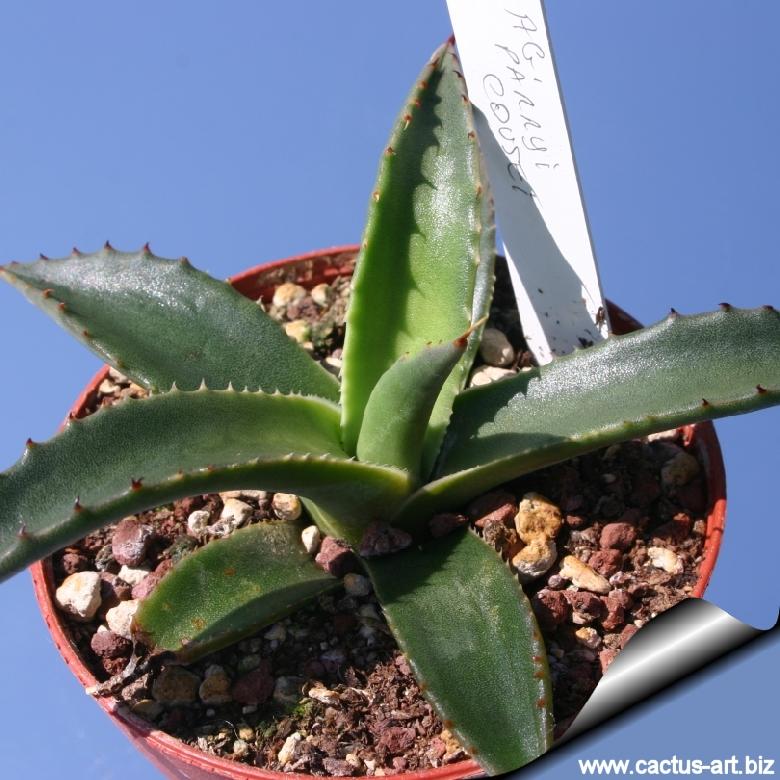 Origin and Habitat: Central Arizona, from the north-western border of the species' range in Yavapai and Gila Counties (common in the vicinity of Date Creek, Congress Junction, Prescott, and Fort Whipple, and from west of Wickenburg to the vicinity of Kingman)
Habitat: It grows dispersed on gravelly soils in the highland slopes in grasslands, chaparral, pinyon-juniper, and oak woodlands vegetation, sometimes with the typical form.
Altitude: 1100--2100 m asl.

Description: Agave parryi var. couesii is one of the smaller and most attractive, hardy agaves. This plant suckers freely to form large clumps of flat-topped rosettes. It distinguish from the standard Agave parry for the smaller, narrower, more gradually pointed leaves and smaller flowers. This taxon represents a variant of smaller growth, however small leaved forms of Agave parryi, occur at random elsewhere. In a single population you can find all forms of plants with different number, shape, colour and size of leaves. It can happen that two individuals of two different populations can look very similar and also, two plants of the same population can look very different.
Rosettes: 35-55 tall and 40-65 cm in diameter less closely imbricate than in Agave parryi.
Leaves: Oblong to lanceolate 25-42(-45) cm long and approx. 6,5-11 cm broad (one-fifth to one-third as wide as long)
inflorescence: At the end of its life cycle a stunning flower spike emerges, with red buds opening to reveal bright yellow flowers. The mother plant dies, but the pups (offsets) continue to grow and replace the old rosette.
Flowers: 25-55 mm long (vs. 55-75 mm long in standard Agave parryi); Ovary 20-34 mm long; Tepals tip more densely papillate than in Agave parryi, tube 6-9 mm long.
Blooming season: Late spring-early summer.
Chromosome number: 2n = 120.
Note: The taxon hybridizes with Agave chrysantha.

Cultivation and Propagation: They are usually cultivated outdoors in rock gardens, in cactus and succulent gardens, in Mediterranean-style landscapes, in borders, or as a specimen. It is very frost hardy!
Growth rate: Slow to medium growing, but speeds up considerably given the best conditions.
Exposure: They do well in full sun or a lightly shaded area with afternoon shade.
Soil: They do best in very well-drained, sandy or gravely soil. As an ornamental it is also grown in containers where it stays smaller than its outdoor brethren. In pots they need a very porous mix soil (e.g. 2 parts peat moss to 1 part loam to 1 part of pumice).
Repotting: Use pot with good drainage.
Fertilization: They grows quickly if kept well nourished with a slow release fertilizer specifically formulated for cactus and succulents applied once or twice a year (poor in nitrogen), including all micro nutrients and trace elements.
Hardiness: The variety couesii is one of the most cold hardy of the agaves, (hardy to -18°C USDA: 9b-11), However this variety has proven to grown without particular damages in wet, cold and harsh winters with temperatures down to -29°C, and is probably hardy to USDA Zone 8a (at least with good drainage).
Scenography: These striking plants are wonderful when used for accent or simply to provide some all year round foliage and often used in a pot as a patio plant, can be moved around to change the scenery or position to give more shelter.
Warning: It is armed with needle-sharp spines.
Propagation: Seeds or suckers which often are found growing around the base of the plant, Remove the basal suckers (if available) in spring or summer and let the cuttings dry for a few days before inserting in compost.