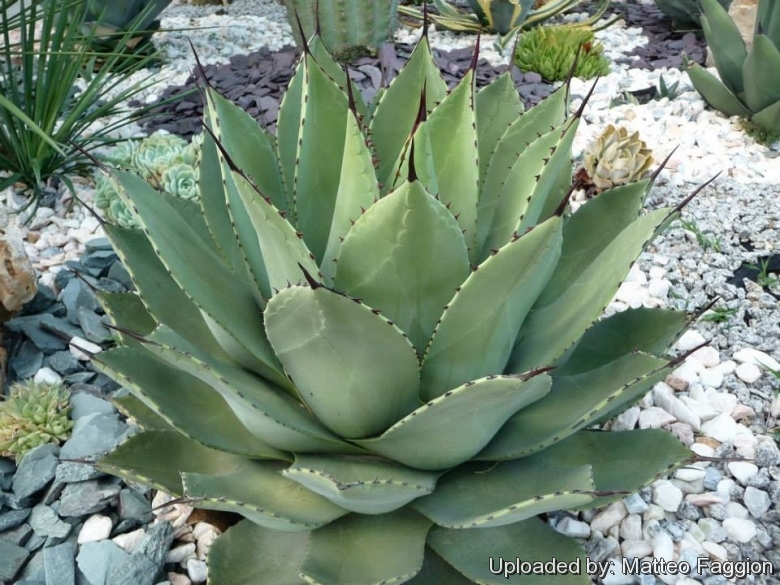 Origin and Habitat: Huachuca Mountains, Arizona on the Mexican border as far south of south as the sierra Huachinera. The populations in adjacent northeastern Chihuahua are probably to be assigned here too.
Altitude range: 1550-2480 metres above sea level.
Habitat and ecology: Agave parryi var. huachucensis dwells principally in oak woodlands on open slopes, but also in higher pine forest zones.

Description: Agave parryi var. huachucensis (firstly described as Agave huachucensis by Baker in 1888) is an upland variant with larger growth of the widespread and variable Agave parryi. It is a compact freely-suckering rosette-forming succulent with broad short grey leaves with prominent brown terminal spines. It is more robust than the standard Agave parryi, with larger leaves up to 20 cm wide and up to 65 cm long, and the flower stem broader with larger flowers up to 75 mm long.
Rosettes: Of densely arranged leaves, 45-60(-75) cm tall by 75-90 cm wide with the sucker growth producing dense clumps; dies after blooming.
Leaves: Grey-green with toothed margins and large sharp spine on tip; 25-65 cm long, 10-20 (or more) cm wide; point on tip is darker, can be tan, brown or black; leaf narrows at base, indentation of previously leaf shows on back of leaves.
Inflorescences: Large stalk held as high as 3-4.5(-6) m above foliage, branched;
Flowers: Bud pink opening to lemon yellow flowers tinged with pink, larger, 62-81 mm wide. Ovary 34 - 47 mm wide; Tepals tube 8 - 9 mm in diameter.
Blooming season: Flowering usually occurs in late spring or early summer.
Note: There is considerable confusion with Agave parryii and Agave parryii var. huachucensis - this plant has a tight rosette of broad short leaves - like the blunter leaf tipped Agave parryii var. truncata it looks a bit like an artichoke. Some consider var. huachucensis as perhaps not worthy of even varietal status (and they may be correct), but it has long been grown as Agave parryii var. huachucensis and it still has a value for a collector because they identify plants with particular characters. 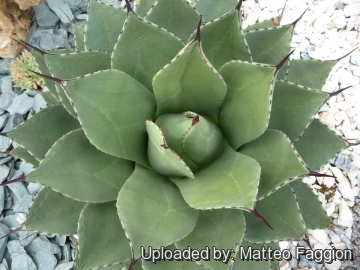 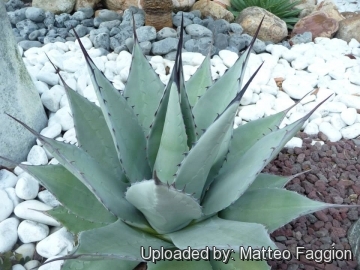 Cultivation and Propagation: Agave parryi var. huachucensis is usually cultivated outdoors in rock gardens, in cactus and succulent gardens, as it is very cold hardy, withstanding temperatures as low as -20° degree Celsius. It suckers, but tends to be slow to sucker, so easy to keep control of. Because of its compact size, plus its low water use and low maintenance, it is considered a good landscaping plant for desert residential landscaping.
Growth rate: Slow to medium growing, but speeds up considerably given the best conditions.
Exposure: They do well in full sun or a lightly shaded area with afternoon shade.
Soil: They are adaptable, but do best in very well-drained, sandy or gravely soil. As an ornamental it is also grown in containers where it stays smaller than its outdoor brethren. In pots they need a very porous mix soil (e.g. 2 parts peat moss to 1 part loam to 1 part of pumice).
Repotting: Use pot with good drainage.
Fertilization: They grows quickly if kept well nourished with a slow release fertilizer specifically formulated for cactus and succulents applied once or twice a year (poor in nitrogen), including all micro nutrients and trace elements.
Hardiness: Agave parryi is one of the most cold hardy of the agaves, (hardy to -18 to -28°C depending by clones (USDA zones: 5-11).
Scenography: These striking plants are wonderful when used for accent or simply to provide some all year round foliage and often used in a pot as a patio plant, can be moved around to change the scenery or position to give more shelter.
Maintenance: Minimal, removal of plant stalk and dead parent plant after blooming.
Traditional uses: This plant was called Mescal in association with the Mescalero tribe of the Native American Apache who roasted and ate the plant.
Warning: The spines along the sides of the leaves are retrorsely barbed, each barb arching backward; should one become embedded in the flesh of your finger, it would not come out easily.
Propagation: Seeds (easy) or suckers which often are found growing around the base of the plant. Remove the basal suckers (if available) in spring or summer and let the cuttings dry for a few days before inserting in compost.