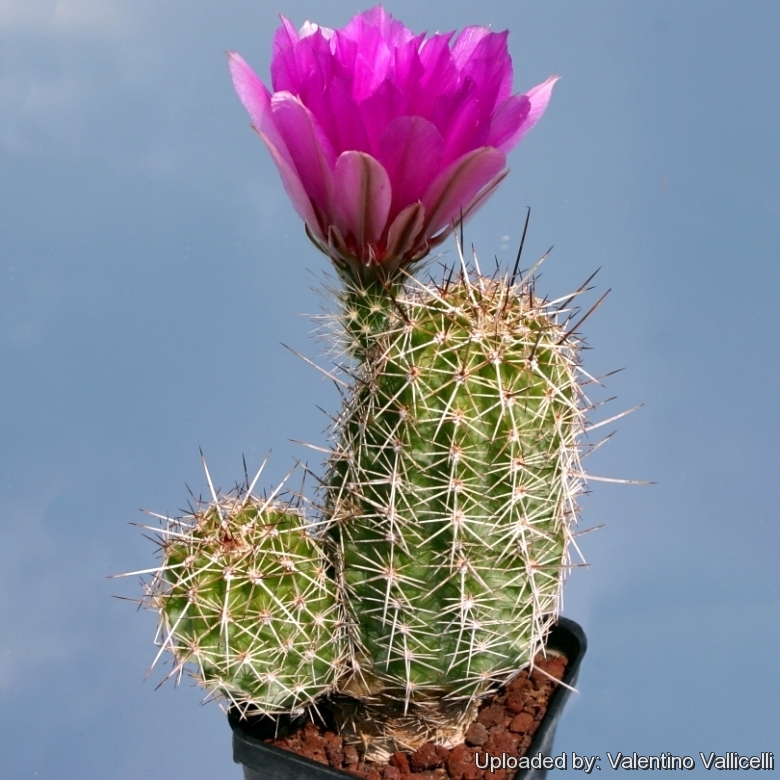 Origin and Habitat: Echinocereus fasciculatus has a wide range in southern USA (Arizona, Western New Mexico) and northern Mexico (Chihuahua and Sonora)
Altitude: It grows at elevations from (30-)600 to 1000(-2100) metres above sea level.
Habitat and Ecology: It grows in the Sonoran desert scrubs of the high plain of Arizona and also in semidesert grasslands and interior chaparral in flats to steep canyonsides on poor, rocky soils. The species is abundant throughout its range. Land use change and urbanization are threats affecting this species, however they do not have a major impact. Echinocereus fasciculatus may prove to intergrade clinally with Echinocereus engelmannii var. acicularis wherever their geographic ranges approach each other.

Description: Echinocereus fasciculatus looks very similar to Echinocereus engelmannii and some authors think they are the same species, but usually E. fasciculatus has 1 principal central spine whereas the similar Echinocereus engelmannii has 2 to 6 central spines per areole. Two susbpecies are recognized, the nominate and subsp. boyce-thompsonii (Orcutt) N.P.Taylor.
Habit: Clustering forming somewhat open clumps with 5 to 20(-30) heads.
Stem: Cylindrical to elongate, mostly erect, green, (5-)15-45 cm tall, 4-8(-10) cm in diameter.
Ribs: 8-10(-15), not distinctly tuberculate, crests slightly undulate.
Areoles: Circular 10-15 mm apart.
Spines: Not obscuring the stem, usually straight, individual spines with broad zones of different colours: yellowish, reddish brown, or grey to black, or white to black, becoming grey.
Central spines: Usually single (or sometimes 2 to 4, of which one is longer), grey to dark brown with darker tips, at right angles to the stem, going upward at the stem tips, 2.5-8 cm long.
Radial spines: (7-)11-13(-15) shorter ones, 5-20 mm long.
Flowers: Borne on the upper part of the stem, broadly funnel-form, pink to magenta or reddish purple, 5-6.5 cm long and in diameter.
Blooming season: Spring (march to April), flowers are diurnal, closing at night and reopening in the morning, and last for about five days.
Fruits: Green, globose, fleshy, 2-3 cm in diameter, turning red as it ripens. The fruit is edible (if you can reach it through the spines). It is said to taste like strawberries, and is eaten readily by birds and rodents.
Fruiting: May-July. 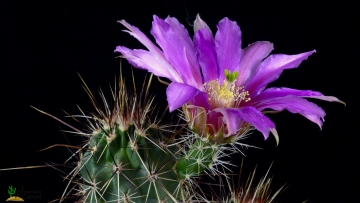 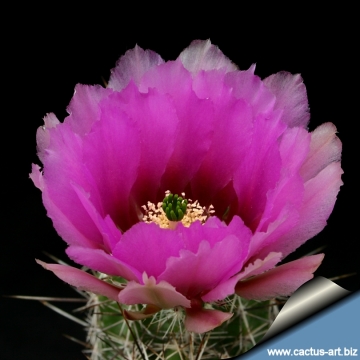 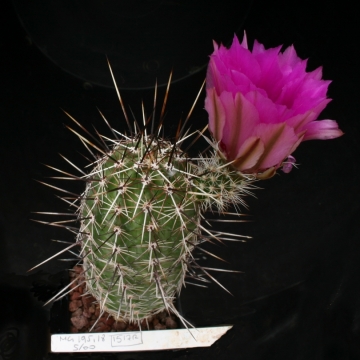 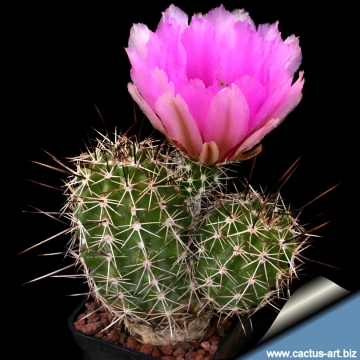 Cultivation and Propagation: It grows rather slowly and is sensitive to over-watering (rot prone). It needs very good drainage to avoid rotting, but requires more moisture than true desert cacti, to grow and produce flowers. Keep drier and cool in winter. It needs full sun. It's cold resistant to -10° (or less, depending on clones) for short periods of time. It is a fine plant for a rock garden or container, and contrasts well with agaves, yuccas, and low-growing flowering plants. It will show its flowers only provided with an adequate winter rest period.
Propagation: Seeds, can also be grown from cuttings, as it branches from the base.