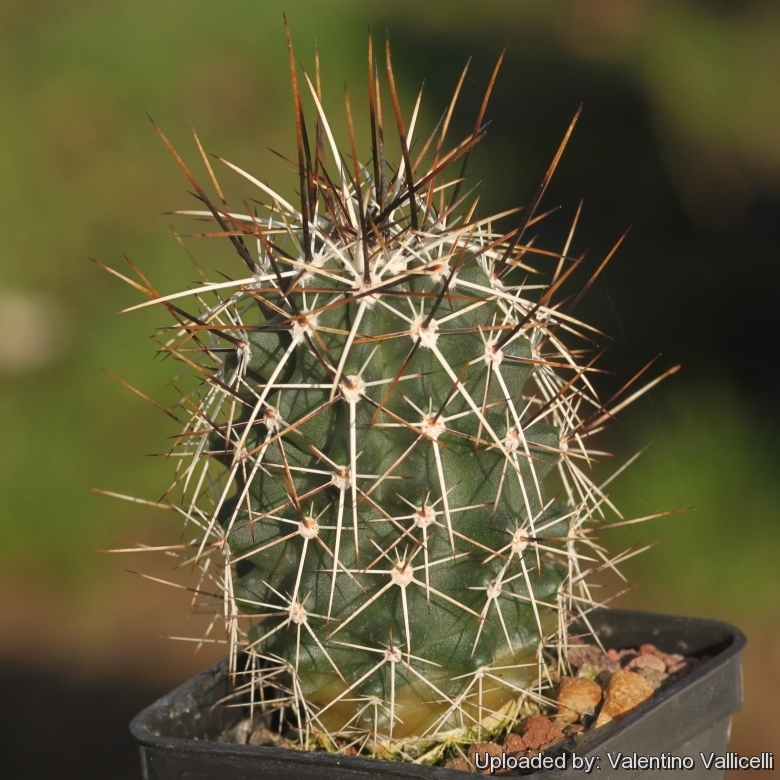 Origin and Habitat: Arizona Desert and the edges of the Mojavean and Colorado deserts. Eastern edge of California in Riverside County. Arizona from near the Bill Williams River to Yuma, Yavapai, western Graham, and western Pima counties. Mexico in adjacent parts of Baja California.
Altitude: 250 to 900 metres elevation.
Habitat: Echinocereus engelmannii var. acicularis grows scattered on rocky slopes, sand or gavel of hills, washes, open areas in old fields and rarely in floodplain in the desert. Some species generally associated with this plant include, ocotillo (Fouqueria splendens), saguaro (Carnegiea gigantea), Opuntia spp.,Yucca spp. and Acacia spp.

Description: Echinocereus engelmannii var. acicularis (needle-like) is a morphological or local form of the very variable Echinocereus engelmannii found at the lowest altitudes. It distinguishes for its more robust habit and appears less spiny than Echinocereus engelmannii var. chrysocentrus. In its extreme form this variety has only 1 or 2 central spines, but plants with spines intermediate with var. chrysocentrus occur near the western and southern margins of the Sonoyta region.
Habit: It is a clumping columnar cactus, ultimately forming somewhat open clumps of 5 to 15 (sometime up to 50 or more) stems which can spread out as large as 1 m in size.
Stems: Mostly erect light green, cylindrical or somewhat tapering distally, usually 15-20 cm tall, but sometime up to 60 cm and about 5 cm diameter, branching freely from the base;
Ribs: 11 to 14 low obtuse, tubercles indistinct, crests slightly undulate.
Areoles: Usually with wool present in first year only.
Spines: Pinkish or yellowish; lower central like the others.
Central spines: 2-4 Lower ones terete or nearly so deflexed and flattened 2,5 -3 cm long, up to 1 mm broad, rather weak and flexible. Other centrals straight, weak and flexible, up to 2,5 long, basally about 1 mm in diameter.
Radial spines: 8 to 20 (or more) mm long .
Flowers: Bright pink flowers (Often varying from paler to darker in same population) but some varieties have different colours, from purple to lavender. The flowers are up to 7 cm in diameter, 5-13 cm long . Flower tube hairy. Anthers yellow, Stigma green in the centre.
Blooming phenology: Spring (February to April), flowers are diurnal close at night and reopen in the morning and last for about five days.
Fruit: Red or orangish 2,5-4 cm long, spherical, fleshy, pulp whitish be-coming infused with pink or red from the skin. Spine clusters deciduous. The fruit is edible (if you can reach through the spines). It is said to taste like strawberry, and is eaten readily by birds and rodents. Fruiting May-Jul.
Chromosome number: Echinocereus engelmannii is tetraploid 2n = 44 (whereas the related Echinocereus nicholii is diploid 2n = 22) 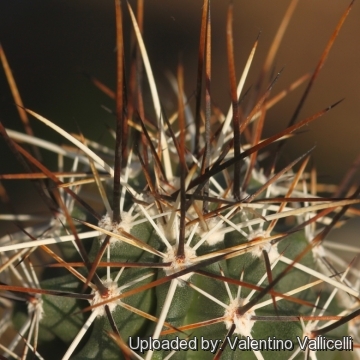 Cultivation and Propagation: The Strawberry Hedgehog Echinocereus engelmannii grows rather slowly and it is sensitive to overwatering (rot prone) and needs a very good drainage to avoid rotting, but requires more moisture than true desert cacti to grow and produce flower.
Soil: Use a loose well drained cactus mix.
Repotting: It require a deep pot suited to accommodate the swollen root, repotting with fresh potting-mix should be done every other year or when the plant has outgrown its pot. However, repotting doesn't necessarily mean they'll need larger containers.
Sun Exposure: Light shade when young, full sun later. Outside it likes strong sunshine, but is tolerant and do well with light shade during the hot Summer months. Tends to bronze in strong light, which encourages spine production.
Hardiness: It is cold resistant to -10° ( or less depending on clones) for short periods of time. It will show its flowers only if we provide an adequate winter rest period.
Watering: They require moderately watering through the growing season. This can be done weekly or more frequently during the summertime, if the weather is sunny enough, but allow to dry fully before watering again. Kept this way, plants will show a healthy growth. Keep rather dry as soon as the temperature starts dropping in October and keep it dry in winter. The plant survives outside without protection in winter (cold hardy to -5° ) but is then somewhat prone to rot, too.
Fertilization: Give an occasional high potassium liquid feed during the active growing period.
Garden uses: It is a fine plant for a rock garden or container, contrasts well with agaves, yuccas, and low-growing flowering plants. Nice planted with Agave utahensis, another very hardy species.
Pest and diseases: They are generally fairly easy to grow, especially if kept pest-free. They are susceptible to, scale insects and spider mite. Watch carefully for infestations of stem and root mealy bugs, and damage from these may well initiate fungal attack.
Propagation: Seeds, also can be grown from cutting as it branches from the base. Take cuttings spring or summer, let them dry till the ends callous well. Then replant them in fresh cactus soil that is ever so slightly moist, and keep it that way till they root. Surface sowing is the best; seeds germinate in 14-28 days at 20° C, remembering that seedlings dislike strong light and dry conditions.