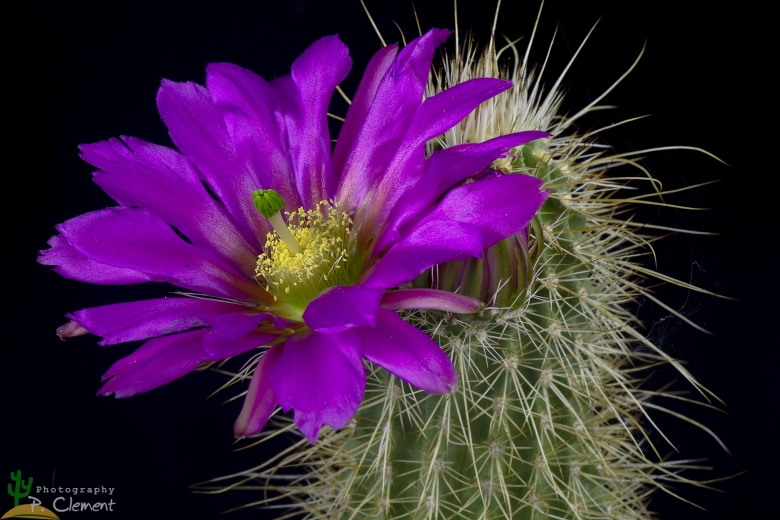 Origin and Habitat: Arizona (Pinal and Santa Catalina Mountains)
Altitude: 700-1000(-1500) metres above sea level.
*Habitat and Ecology: Echinocereus apachensis occurs in sonoran stony desert grassland and desert upland in chaparral shrublands on mineral, sandy-loamy soil. This species is common and often abundant where it occurs and there are no major threats affecting it.

Description: Echinocereus apachensis is a morphological or hybrid form of Echinocereus bonkerae found at the lowest altitude for the species. It distinguishes for its taller stems and unusually long (longer than 10 cm) flexible spines. Plants are very variable, as you would expect from hybrid swarm, and the parents must be Echinocereus engelmannii or Echinocereis fasciculatus, both common in the general area. Not at all every plant look like that. Most wild plants have their central spines shorter (like in standard Echinocereus bonkerae), while some have stiffer and thicker spines. Plants usually have several brown or straw-yellow central spines with other spines white, but some plants are pure white. It is a particularly beautiful plant in flower. Flowers are crimson in colour with darker throats.
Remarks: Echinocereus bonkerae (comprising var. apachensis) is a very variable and poorly defined species, frequently lumped with Echinocereus fendleri or Echinocereus fasciculatus, and it is not always identifiable in the field. All this three species vary from short-spined to long-spined.
Habit: It forms low, loose mounds of 5-30 stems up to 50 cm tall , width 1 metre branching at or before sexual maturation.
Stems: Ovoid to Cylindrical, mostly erect, green, up to 50 cm long, 4-6 cm in diameter, with spines not obscuring the stems.
Ribs: 12-18, low, not distinctly tuberculate.
Areoles: 8-20 mm apart.
Central spine: 1 to 3 per areole, very long, straight, erect, thin and flexible, mostlty descending, white to straw-yellow becoming grey, often brown to black especially at bases or tips, 1,5-10 (or more) cm long. (The standard Echinocereus bonkerae has shorter spines usually less than 1 cm long).
Radial spines: 12-16, whitish, yellowish or brown, often becoming grey, spreading to almost pectinately arranged, all straight, 5-15 mm long.
Flowers: Borne on the upper half of the stems just below the shoot tips, very showy, broadly funnelform, relatively large magenta to deep purple-pink, 5-7 cm long and 4-9 cm in diameter. Flower tube 12-20 long 10-30 mm in cross section with hairs up to 1 mm long. Inner perianth segments deep magenta (to dark purple) with darker midstripes, basally very dark purple, 20-60 × 8.5-20 mm, tips relatively thin and delicate. Anthers yellow; nectar chamber 2-4 mm. There is also variation in flower shape, some plants having more E.engelmannii-like bell-shaped flowers, but mostly they are more of a trumpet shape.
Blooming season: Spring (in habitat Mar-May); fruiting 2 months after flowering.
Fruits: Globose to egg shaped, 10-25 mm long and in diameter, green, becoming red or orange red, fleshy. pulp white or pale pink.
Chromosome number: 2n = 22. 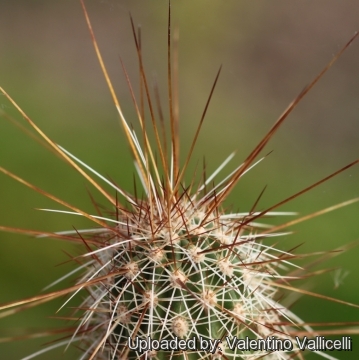 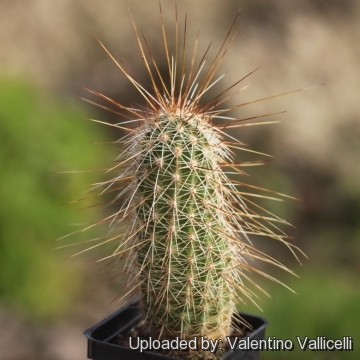 Cultivation and Propagation: In culture Echinocereus apachensis presents no difficulties, but grows rather slowly and is sensitive to over-watering (rot prone).
Watering: It needs very good drainage to avoid rotting, but requires more moisture than true desert cacti, to grow and produce flowers. Keep drier and cool in winter.
Exposure: It needs full sun.
Hardiness: It's cold resistant to -10° (or less, depending on clones) for short periods of time.
Uses: It is a fine plant for a rock garden or container, and contrasts well with agaves, yuccas, and low-growing flowering plants. It will show its flowers only provided with an adequate winter rest period.
Propagation: Seeds, can also be grown from cuttings, as it branches from the base. When grown from wild seeds it is a good idea to keep as many plants as possible until they mature, and then select the most remarkable plants to keep in the collection.