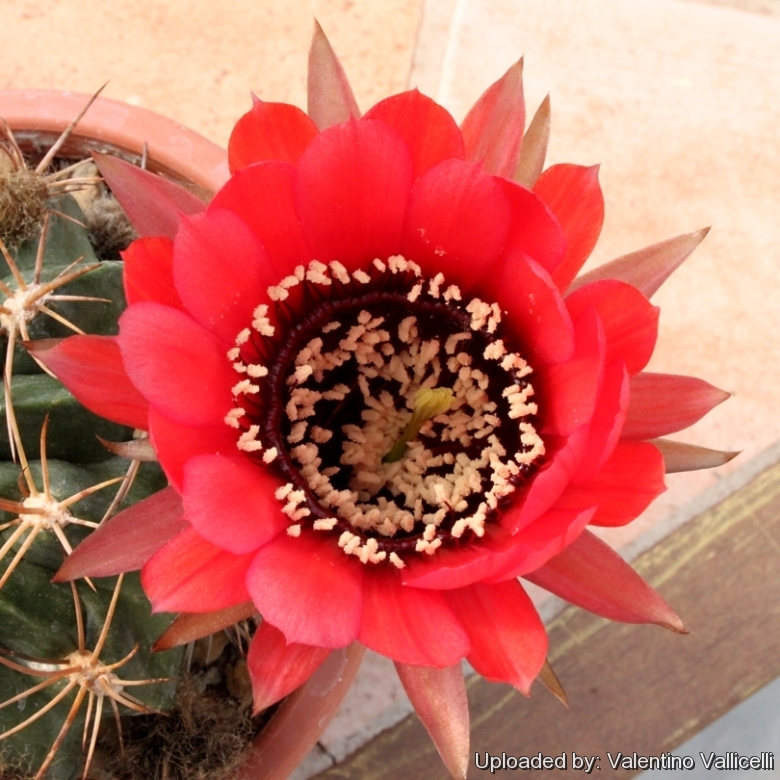 Origin and Habitat: Echinopsis marsoneri has a relatively restricted range in North Argentina (Province of Salta and Jujuy)
Altitude: It grows at around 2800 to 4000 metres in altitude.
Habitat and Ecology: This species grows in rocky areas in the altiplano. It is quite common where it occurs and not subject to any major threat.

Description: Echinopsis marsoneri (commonly known as Lobivia marsoneri) is a small and very variable cactus that grows solitary or in groups. It has multicoloured and showy blooms.
Stem: Soft, about 5 to 7 cm across, gray-green, green, dark green or tan-green (depending on clones and cultivation conditions), at first spherical, egg-shaped, then elongate as it ages. The crown is slightly depressed and covered with whitish wool
Ribs: 10-14, compressed, running downward and divided into slanting tubercles whose arrangement creates the impression of a wavy line.
Areoles: 3 mm across, with grey-white felt.
Spines: Of different length, usually straight or slightly bent, directed upward, dark brown to blackish in youth, later grey.
Radial spines: Approximately 10 or less, about 1 cm long.
Central spines: 1 to 3, strong, dark, frequently red; the upper spine usually attains a length of 3 cm and is often hooked and thickened basally (but sometime the longest of them may reach the length of 4-6 cm).
Root: Thick taproot.
Flowers: Arising from the basal tubercles on the side of the plant, up to 7 cm wide, their colors is very variable, going from yellow to orange, tomato-red, vine-red and also happening through all the imaginable tones of violet. All of them have in common that the hymen (or throat ring of the flower) is always of a very dark purple-violet to black, thickened at the edge and glossy. The stamens are purple, the anthers yellow. 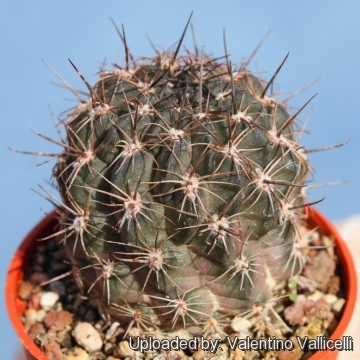 Echinopsis marsoneri Photo by: Valentino Vallicelli
Send a photo of this plant.