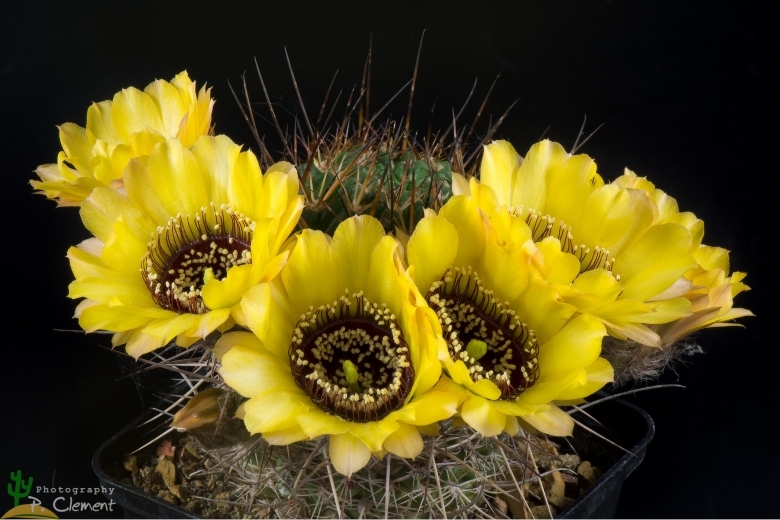 Origin and Habitat: Echinopsis jajoiana var. nigrostoma|SN|16040]] has a relatively restricted range in North Argentina (Province Jujuy)
Altitude: It grows at around 2400 to 3800 metres in altitude.
Habitat and Ecology: This species grows in rocky areas in the altiplano. It is quite common where it occurs and not subject to any major threat. 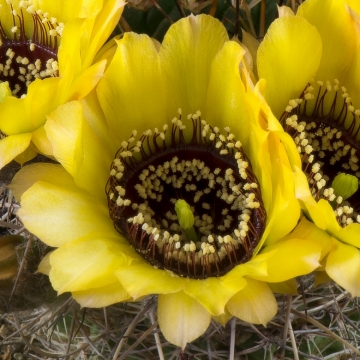 Cultivation and Propagation: Echinopsis jajoiana var. nigrostoma|SN|16040]] (= Lobivia nigrostoma) is a summer-growing species that offers no cultivation difficulties and regularly shows its small greenish flowers if we provide an adequate winter rest period.
Soil: The substratum must be very porous, slightly acidic, with good drainage.
Repotting: Repotting every 2-3 years. It will need a pot with sufficient depth to allow the tap root. As it is especially prone to rot under-pot in a smaller container filled with very porous compost. Use pot with good drainage.
Watering: Water regularly from March till October (but do not over-water), and keep perfectly dry in winter, at temperatures from 5 to 15 degrees centigrade. In the rest period no high atmospheric humidity!!Care must be taken with watering as they tends to become swollen and untidy in growth habit if given too much water and shade.
Exposition: They require as much sun and light as possible, and pure air availability. Tends to bronze in strong light, which encourages flowering and heavy spine production.
Hardiness: It is quite frost resistant if kept dry (hardy to -5° C or less for short periods of time) Keep drier and cool in winter. The fluctuations of temperature between the day and the night (especially the temperature reduction at night) and fresh soil, greatly contribute to the health of plants. They cannot tolerate stagnant heat.
Fertilization: During the growing season enrich the soil using a fertilizer rich in potassium and phosphorous, but poor in nitrogen, because this chemical element doesn’t help the development of succulent plants, making them too soft and full of water.
Pests & diseases: It may be attractive to a variety of insects, but plants in good condition should be nearly pest-free, particularly if they are grown in a mineral potting-mix, with good exposure and ventilation. Nonetheless, there are several pests to watch for:
- Red spiders: Sensitive to red spider mite. Overhead watering is helpful in controlling mites.
- Mealy bugs: Occasionally mealy bugs they develop aerial into the new growth among the wool with disfiguring results, but the worst types develop underground on the roots and are invisible except by their effects.
- Scales: Scales are rarely a problem.
- Rot: Rot it is only a minor problem with cacti if the plants are watered and “aired” correctly. If they are not, fungicides won't help all that much.
Propagation: Propagate by seed or shoots. Seeds germinate in 7-14 days at 21-27° C in spring, remove the glass cover gradually as the plants develops and keep ventilated, no full sun for young plants! The seedlings should not be disturbed until they are well rooted, after which they can be planted separately in small pots.