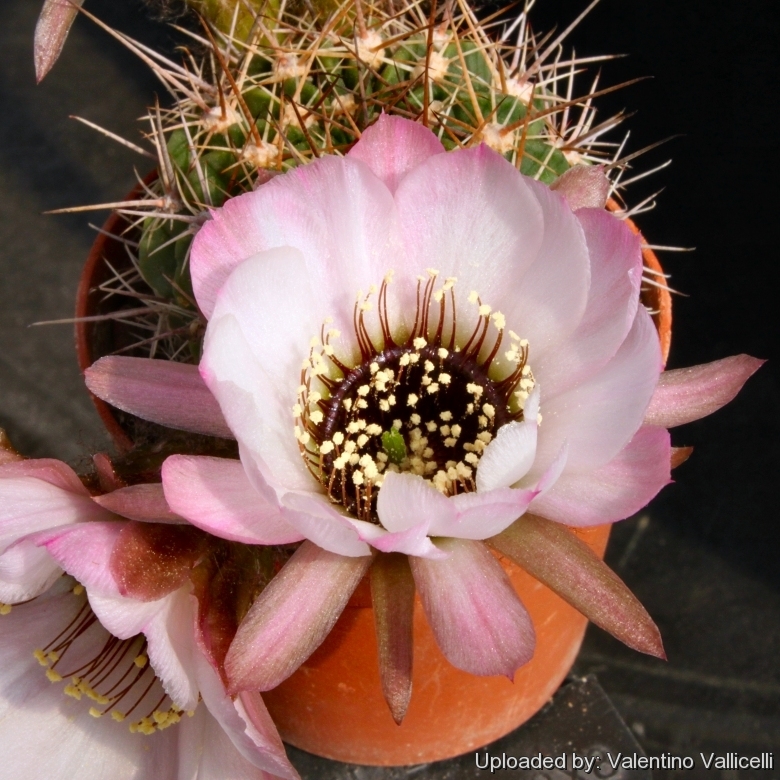 Description: Echinopsis jajoiana cv. Anemone best known as Lobivia jajoiana cv. Anemone is one of best Lobivia cultivars very priced for its unique bicoloured flowers, pale pinkish-white with a contrasting very dark purple-violet to black throat. It is extremely attractive.
Habit: It is a small geophytic cactus that usually grows solitary, but given the best conditions may form small groups.
Stem: Flat globose-spherical, egg-shaped, then elongate as they ages, soft, up to 50-60 mm in diameter, grey-green. The crown is slightly depressed and covered with whitish wool.
Ribs: 10-14 compressed, straight running downward or spiralling and divided into slanting tubercles 10 mm long, chinned and keeled below, whose arrangement creates the impression of a wavy line.
Areoles: Oval, 3-4 mm long, white-tomentose.
Of different length, usually straight or slightly bent, directed upward, dark brown to blackish in youth, later grey.
Radial spines: Approximately 10 or less, about 1 cm long.
Central spines: 1 to 3, strong, dark, frequently red; the upper spine usually attains a length of 3 cm and is often hooked and thickened basally (but sometime the longest of them may reach the length of 4-6 cm).
Root: Thick taproot.
Flowers: Arising from the basal tubercles on the side of the plant, bell-shaped, fragrant, about 50-70 mm long and in diameter, ovary and tube grey/green with violet-brown scales and grey wool, outer perianth segments lanceolate, grey pink with a darker median strip, inner perianth segments spatulate, wavy, very pale pink to almost white with tips suffused with pink, which contrats with the dark purple-violet to black hymen (or throat ring of the flower), which is thickened at the edge and glossy. Filaments black, anthers and pollen pale creamy-yellow. Style and stigma lobes green.
Fruit and seed: As in the other varieties.
Remarks: Similar flower colours has been inherited by some Chamaecereus hybrids too. 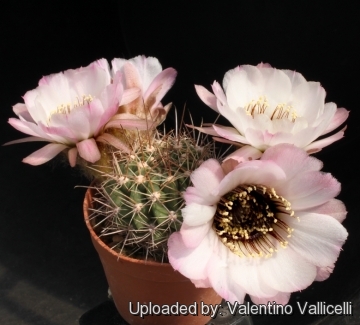 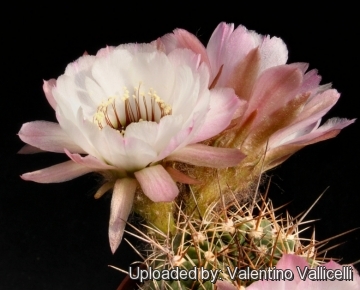 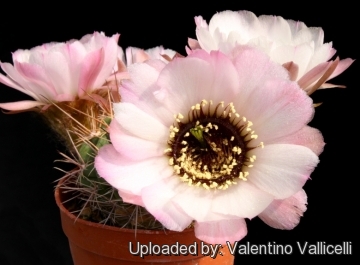