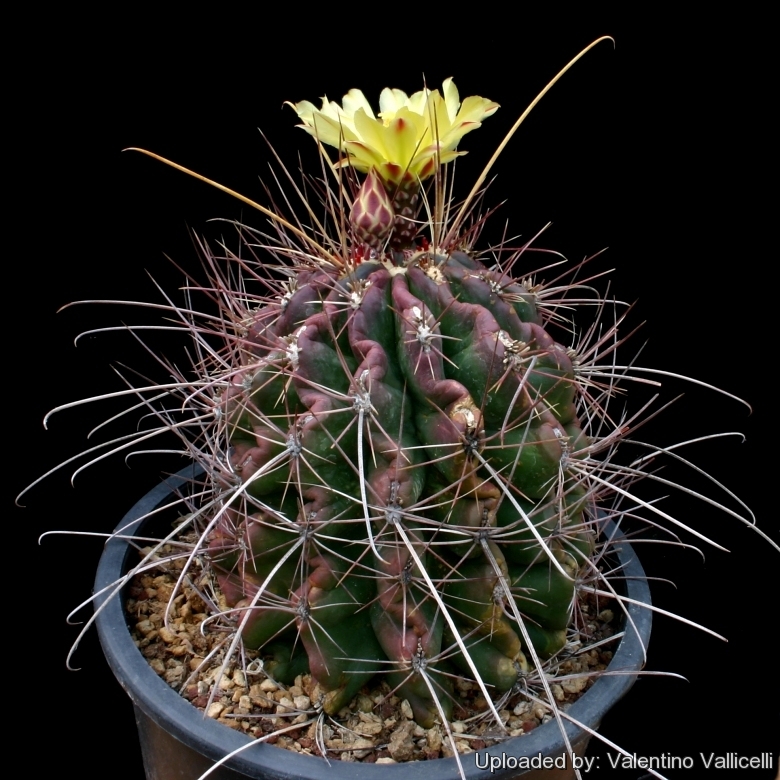 Description: Ferocactus hamatacanthus var. longihamatus is one of the many geographical form of the widespread and morphologically variable Ferocactus hamatacanthus. Many of its morphological and geographical variant was early classified as different independent species, but nowadays all this plant are considered part of a multiform species, where each form is linked to others by populations of plants with intermediate characteristics. Ferocactus hamatacanthus var. longihamatus has great rounded ribs composed of massive tubercles swelling around each areole and very long central spines, curved or slighly hooked.
Habit: Solitary, or sparsely clumping
Stems: Spheric to ovoid, dark green 10-30 × 7.5-20 cm.
Ribs: typically 13 ( to 17), undulate to deeply crenate, with massive tubercles swelling around each areole.
Areoles: 1-3 cm apart, young ones with yellow felt. The areolar gland are numerous bright red up to 1 cm long.
Spines: 12-16 per areole.
Central spines: Up to 4 per areole, very long, curved or slightly hooked, principal central spine thin more or less flattened, 5-10(-20) cm long, 0,4-3 mm, more or less flexible.
Flowers: Pale yellow 6-7,5 long, 7-9 cm in diameter; stigma lobes 8-10.
Fruits: Egg-shaped, green, yellow-green, or olive, 20-45 long and 10-35 mm in diameter.
Seeds: About 1 mm.
Blooming season: Early summer to autumn in succession. 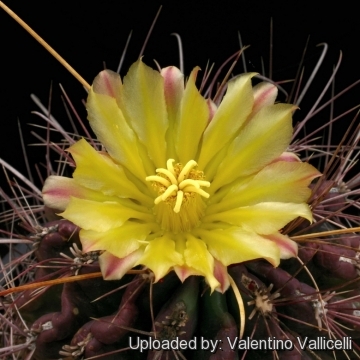 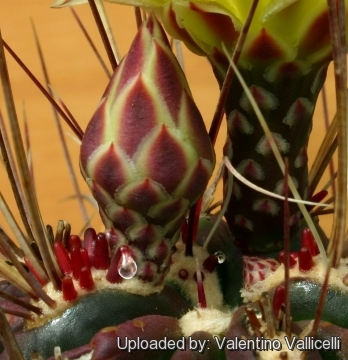 The nectaries with a drop of nectar. (Ferocactus hamatacanthus var. longihamatus) Photo by: Valentino Vallicelli 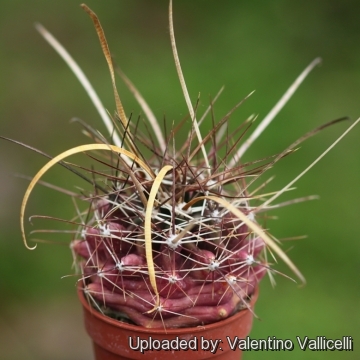 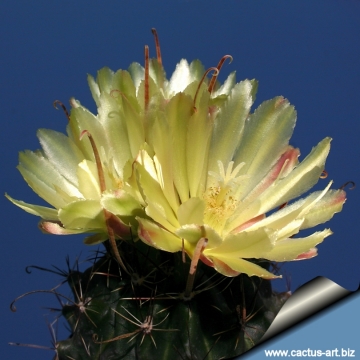 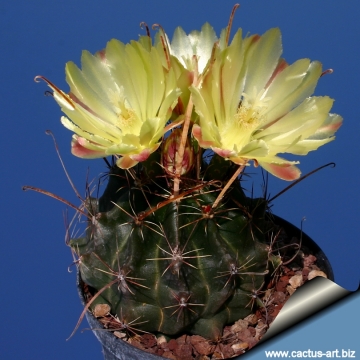 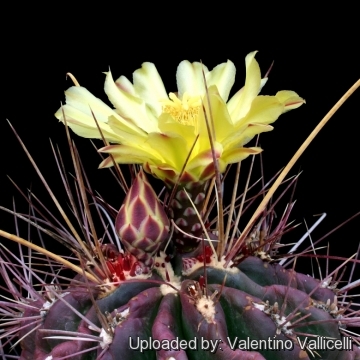 Cultivation and Propagation: This species is easy and well worth growing. Require little care once they have reached a nice flowering size. H. simuatus is suited for any rich, well drained soil in full sun throughout the year (But do better with some light shade in summer). Pot culture: grow best in a well-drained container filled with a porous cactus soil mixture that doesn't contain too much humus. To insure robust plants water and fertilize during the aestival growth cycle, this plant need plenty of water (indicatively to about once a week) But needs to be avoided wetting the bodies of these plants while they are in sunlight. A wet cactus in the sun light can cause sun burning which can lead to scars or even fungal infections and death. Care must be taken to prevent sooty mould forming on the sugary secretions from near the areoles.
Frost Tolerance: In winter keep completely dry at 5°C this usually aids in maintaining a healthier plant, but it is hardy to -7°C.
Propagation: Seeds or cutting. Seeds are the typical way of reproducing. These cacti will easily grow from seeds and some from cuttings. Seeds can be sown in the spring or summer in well-drained pots of soil for cacti and sow the seeds thinly on top. Cover them with a bit of fine quartz grit. Moisten and lay a piece of glass across the top. The pots should be set in a warm greenhouse until they start to sprout after which the glass should be progressively removed so they can receive full light and air. It isn't good to keep the glass over the seedlings. The seedlings well developed can be planted separately in small pots.
Cuttings made from pieces of the stem of any size can be detached and laid aside for a few days to allow a protective "skin" to form over the cut. They can then be planted in pots. Place them in a spot where they'll receive sun and do not water until the soil becomes fairly dry. After a while the soil can be moistened regularly but never kept constantly saturated.