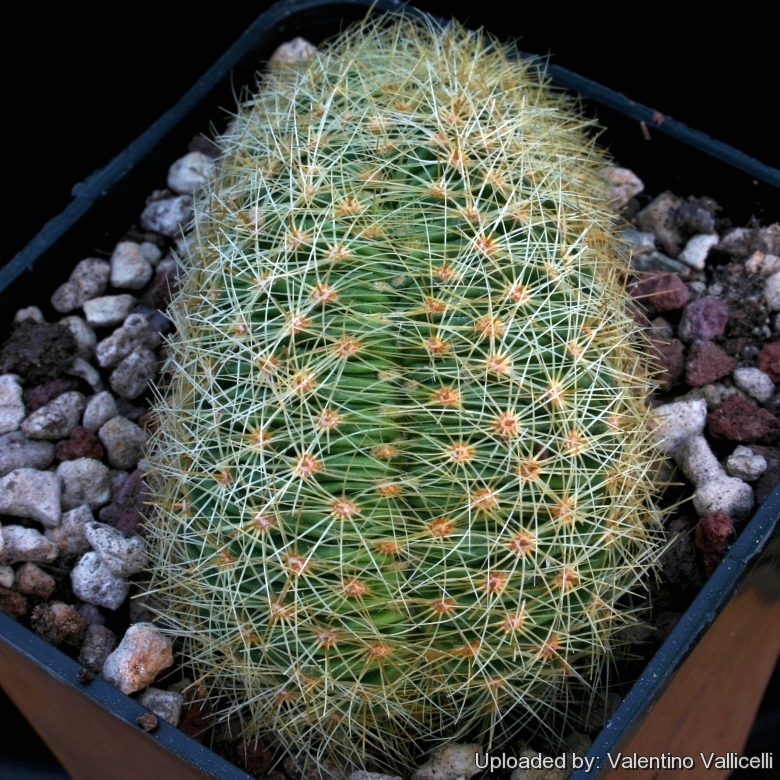 Description: The typical Ferocactus hamatacanthus subsp. sinuatus is a small barrel cactus (commonly known as "Yellow Turk's Head") that is grown for its long flexible yellow spine. The beautiful crested form is very rare in collection and highly priced for its sculptural shape and yellow spination. Older crested plant, if well grown, can reach a size up to 40 cm in diameter, or more.
Roots: Diffuse.
Stems: At first fan shaped then brain shaped, dark green to grey-green with crested growth 7,5-20 cm in width.
Ribs: Narrowly compressed, acute, somewhat undulate to deeply crenate and slightly tuberculate.
Areoles: Circular to elliptic 1-3 cm apart, young ones with white, yellow or grey felt with elongated glands, 2 to 4 mm long between the flower and the spines; these at first are soft, but in age become hard and spine like.
Spines: 12-16 per areole.
Central spines: up to 4 per areole, yellow or straw coloured, terete or somewhat flattenedn curved or slightly hooked, principal central spine thin more or less flattened, 5-10 cm long, 0,4-3 mm broad, more or less flexible.
Radial spines: 8-12 terete, grey to reddish, especially near the stem apex upper ascending, lower descending, laterals appressed, 3,5-7,0 cm long.
Flowers: Near apical in a ring, funnelform, pale yellow 6-7,5 long, 7-9 cm across. Filaments yellow to orange-yellow, anthers and pollen yellow. Stigma stigma yellow wit 8-10 lobes.
Blooming season: Late summer to autumn, flowers open midday, partially close at night, and reopen again for several days.
Fruits: Globose to elongate, 20-45 mm long, 10-35 mm in diameter, green, yellow-green, or olive becoming dark brownish red at maturity. The fruit of this species is unlike that of most other species of the genus; the skin is thin and the flesh juicy and edible.
Seeds: About 1 mm long, shiny black, pitted.
Blooming season: Early summer to autumn in succession.