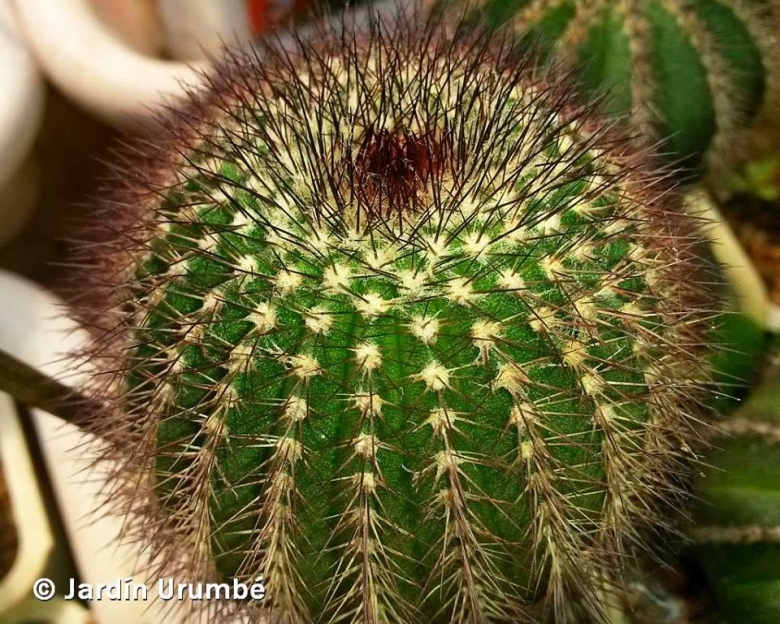 Origin and Habitat: Barao de Quacuy, Minas Gerais, Brazil (Field nunber HU642)
Habitat and ecology): Uebelmannia pectinifera v. crebispina is found in the mountain regions of Minas Gerais, where it grows at an altitude of about 1000m above sea level, in areas of fertile soil.

Description: Uebelmannia pectinifera v. crebispina is an undescribed name (nomen nudum - Abbreviation n.n., A title lacking valid description) and distinguished by the field number HU642. It was first named by the cactus trader and explorer Leopoldo Horst resident in Brazil. It has been said that Horst gave many of the plants he collected/sold new names to increase sales. He never properly described his plants, he just gave them names and sold them. He deliberately hunted down unusual looking things so it can be difficult to characterise them in terms of the existing described species. This “variety” is somewhat similar to Uebelmannia pectinifera, but then who can say what it should really look like since Horst never described it. Uebelmannia pectinifera v. crebispina is not readily distinguishable from the standard species, if not for the geographical provenance. More likely they are one and the same species.
Stem: Globose, becoming short-cylindrical with age, about 30 cm tall and 10 cm in diameter, with a light green or bronze epidermis. The apex is pubescent with thick greyish hair.
Ribs: About 28, straight and tall.
Areoles: Rounded, covered with whitish felt.
Spines: 3-5 spines (more numerous in youth), at first yellow to dark yellow-brown becoming grey to grey-black, and about 35 mm in length. The spines are neatly arranged, straight, and give a comb-like effect.
Flowers: Light yellow, to 1.5 cm in length and about 1 cm in diameter.