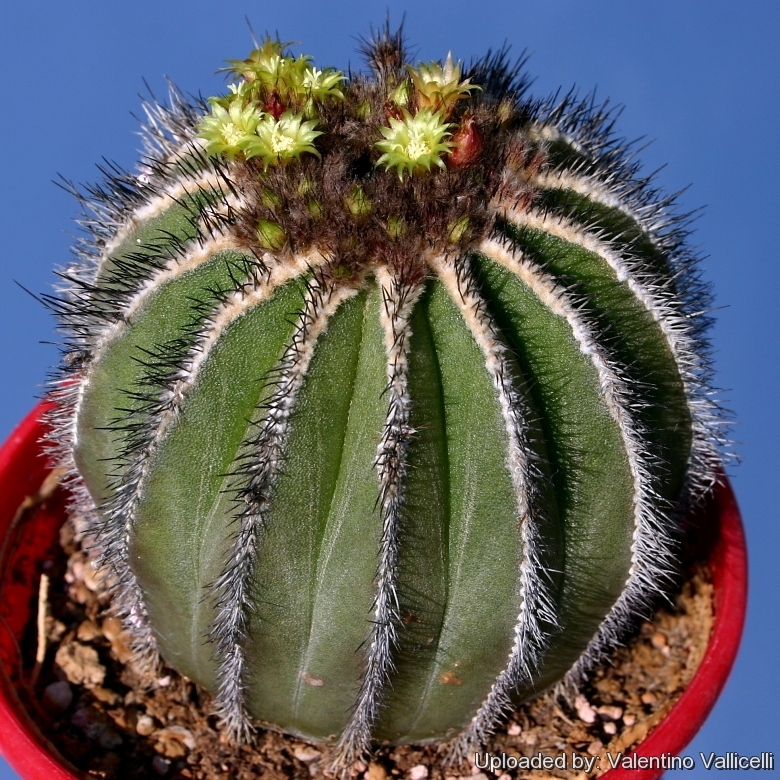 Uebelmannia pectinifera Photo by: Valentino Vallicelli
This is one of the most striking and recognisable Uebemannia with a green to deep purple or reddish-brown, firm, almost lizard-skin textured 'skin' and spines on vertical ribs.

Origin and Habitat: Uebelmannia pectinifera is only known from one location, north east of Diamantina, mountain of Minas Gerais, in Brazil (extent of occurrence 3,000 km2).
Altitude: 650 to 1350 above sea level.
Habitat: The plants are found growing in campo rupestre (dry savanna) and rocky areas in rock cracks or in pockets or small flat areas of organic leaf mould and sand found among crystalline rocks. Uebelmannia pectinifera has small range and the population is at risk due to several threats, the main one being overcollection, which cause a continuing decline of individuals. The population is severely fragmented. Hence, it is listed as Endangered. This species is more common in collections than it is in habitat.

Description: Uebelmannia pectinifera is a solitary cactus 10-50(-100) cm tall. It is a multiform species and very variable in habitat, comprising a complex of numerous local forms, where each form is linked to others by populations of plants with intermediate characteristics. Three subspecies are recognized, the nominate form (subsp. pectinifera), subsp. flavispina (Buining & Brederoo) P.J.Braun & Esteves and subsp. horrida (P.J. Braun) P.J. Braun & Esteves. The circumscription into subspecies possibly represents convenient over-simplification of the situation in nature.
Stem: Solitary or (rarely) aggregated, globular to fusiform or elongated or cylindrical, it is reported to grow to as much as 1 m tall and 10-15(-17) cm wide with gummiferous ducts under the epidermis. The epidermis is dark reddish-green to reddish-brown or green to grey-green, with or without waxy plates and rough. (In cultivation the colour of the plants depends on sun exposure, the plants grown in shadow are green with white stripes, while the ones in full sun take on a dark frost brown or purple colour) .
Ribs: 13-40 (15 to 18 in subsp. pectinifera), acute, straight, vertical and prominent, not tuberculate, to 5 mm high and 5-7 mm broad.
Areoles: 2 mm in diameter set closely (less than 3 mm apart), to form an almost continuous felt-like line down the ribs' sides, with sparse greyish or brownish wool when young, later glabrescent.
Central spines: Dark brown/grey to black, but also whitish or yellowish brown,1 to 4, up to 1.5(-2) cm long; the spines are close set, often interlacing, neatly arranged and give a comb-like effect. They're porrect or spreading, and straight.
Radial spines: Absent.
Flowers: Diurnal, slender funnel-shaped greenish yellow. They are 8-16 mm long, 6-10(-12) mm in diameter. Tube to c. 8 mm, with triangular bract-scales, white hairs and bristles. Perianth-segments pale yellow, tinged reddish or greenish; style 6-7 mm; stigma-lobes 7-8.
Blooming season: Flowers come sporadically from Early spring to Late Summer.
Fruits: Pear shaped to cylindrical, violet-red to bright pinkish, 1.5-2.5 cm long 6-8 mm wide, with few glabrescent or slightly woolly bract-scales.
Seeds: 1.7-2.4 x 1.3-1.6 mm, keeled, brown, shiny, smooth; testa cells flat. 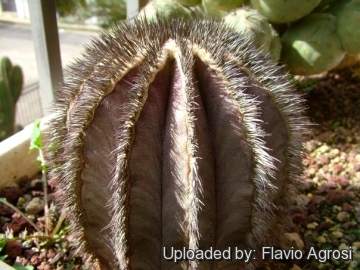 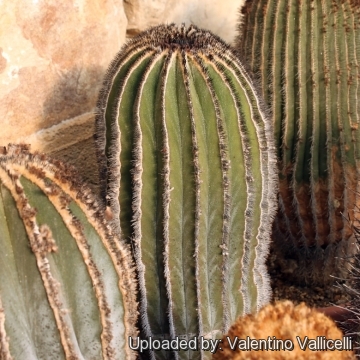 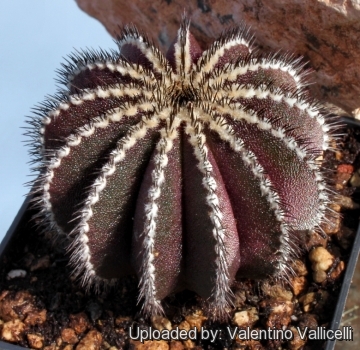 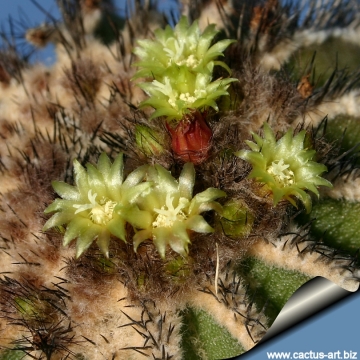 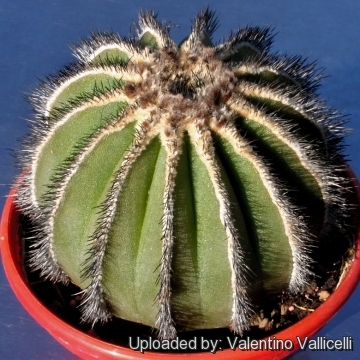 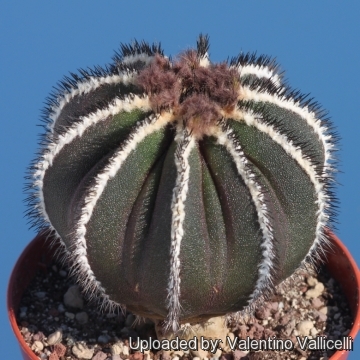 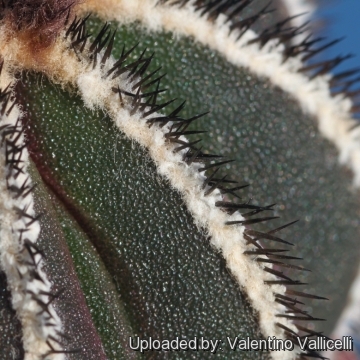 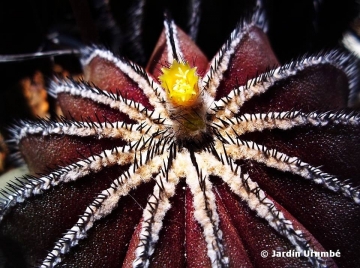 by Valentino Vallicelli
There are a total of 17 Photos.
Click here to view them all!
Cite this page: "Uebelmannia pectinifera" Text available under a CC-BY-SA Creative Commons Attribution License. www.llifle.com 14 Nov. 2005. 06 Feb 2023. </Encyclopedia/CACTI/Family/Cactaceae/14312/Uebelmannia_pectinifera>