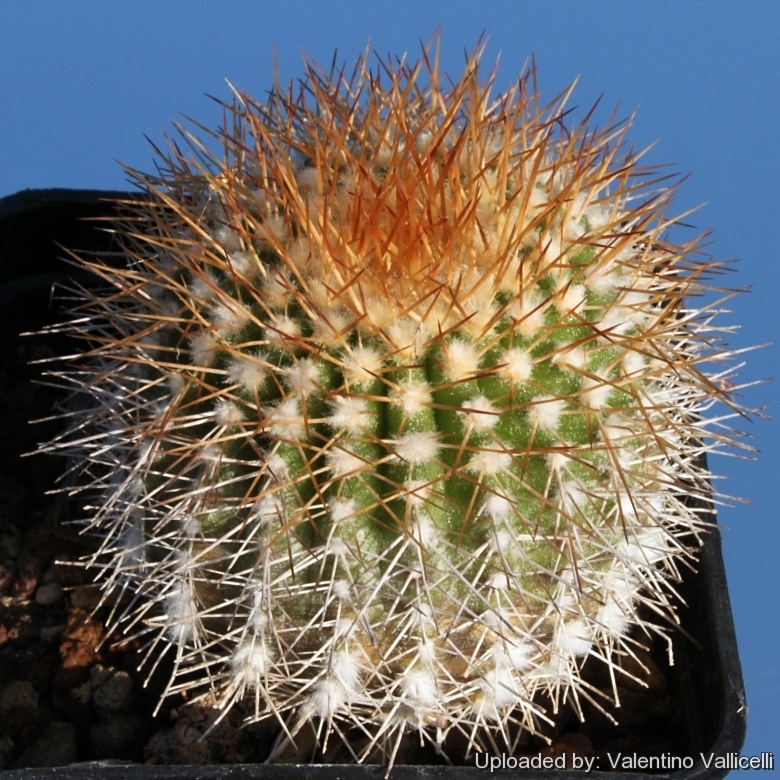 Uebelmannia horrida (Uebelmannia pectinifera subs. horrida) Photo by: Valentino Vallicelli
This form is greener than the type with firm, almost lizard-skin textured 'skin' and spines more spreading and doesn't give the comb-like effect of the type.

Origin and Habitat: Brazil, Southern America. (Mountains of Minas Gerais: Serra do Espihaço)
Habitat: The plants are found growing in dry savanna and rocky areas in rock cracks or in pockets or small flat areas of organic leaf mould and sand found among rocks at about 1000m altitude. It is threatened by habitat loss.Uebelmannia pectiniferaa and its subspecies are more common in collections than they are in habitat.

Description: Uebelmannia pectinifera ssp. horrida is a solitary cactus 50- 100 cm tall.
Stem: Up to 18 cm wide, although usually globular or slightly elongated in cultivation, it is reported to grow to as much as 100 cm tall. It is greener than the type reddish-green to brownish-green, with off-white scales. (In cultivation the colour of the plants depends on sun exposure, the plants grown in shadow are green with white stripes, while the ones in full sun take on a purple colour)
Ribs: 23 to 40, acute, vertical and prominent.
Areoles: Set closely and nearly confluent to form an almost continuous grey to brownish felt-like line down the ribs' sides.
Central spines: Dark brown/grey, 1 to 4, up to 1.5(-2) cm long; the spines are close set, neatly arranged, straight, often interlacing, but are
Radial spines: Absent.
Flowers: Diurnal, funnel-shaped greenish yellow. They are 15 mm long, 12 mm in diameter.
Blooming season: Flowers come sporadically from Early spring to Late Summer.
Fruit: pear shaped to cylindrical violet-red 1,5-2,5 cm long.
Remarks: The Uebelmannia pectinifera ssp. horrida and all the other plants belonging to the Uebelmannia pectinifera complex are very variable in habitat, it has three recognized subspecies, but a multitude of different forms exist, where each form is linked to others by populations of plants with intermediate characteristics.