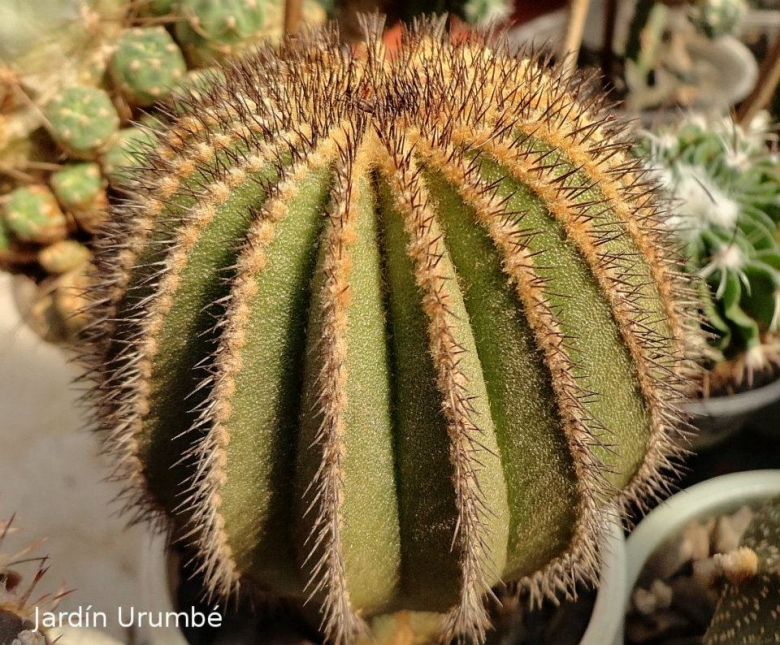 Origin and Habitat: 10 km E of Mendanha towards the Rio Jequitinhonha, Minas Gerais (Brazil, Southern America).
Habitat: The plants are found growing in dry savanna and rocky areas in rocks cracks or in pockets or small flat areas of organic leaf mould and sand found among rocks.

Description: Uebelmannia pectinifera var. multicostata Buining & Brederoo (HU 362) is one of the morphological or local form of Uebelmannia pectinifera distingusced for the larger number of ribs. This variety usually has 20 or more ribs whereas the typical U. pectinifera var. pectinifera has only 15-18 ribs. However the distinguishing characteristics of the var. multicostata, appear to fall within the natural variation of U. pectinifera and it should be synonymized with the latter, but it still has a value for a collector because they identify plants with particular characters.
Stem: Normally solitary, globular or slightly elongated in cultivation, it is reported to grow to as much as 50(-80) cm tall and 10-15 cm wide, dark reddish-green to reddish-brown with what looks like a waxy coating covered with pores and if looked at close has a strange resemblance to human skin. (In cultivation the colour of the plants depends on sun exposure, the plants grown in shadow are green with white stripes, wile the ones in full sun take a dark frost brown or purple color)
Ribs: 20 or more vertical and prominent.
Areoles: Set closely to form an almost continuous felty line down the ribs sides.
Central spines: Dark brown/grey 1 to 4, up to 1.5 (-2) cm long, the spines are close set neatly arranged straight and give a comb-like effect.
Radial spines: Absent.
Flowers: Diurnal, funnel-shaped greenish yellow often tinged reddish. They are 15 mm long, 12 mm in diameter, with no discernible scent.
Blooming season: Flowers come sporadically from Early Summer to Late Summer
Fruit: Inconspicuous, dark red and globular. 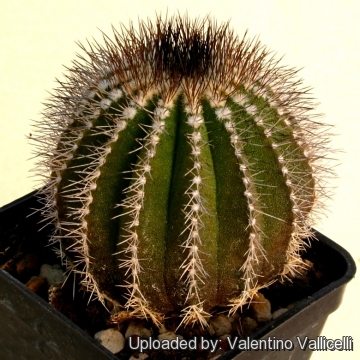 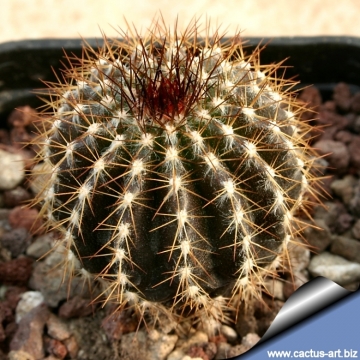 Cultivation and Propagation: This tropical cactus prefers loves warm moist, humid conditions and mist spraying is a must in summer. Water regularly during the growing season and use a very draining mineral potting substrate. At the onset of winter, do not water. Uebelmannias need heat all year round and extra winter heat, minimum 10C is best. Avoid any frost. Keep cool in summer. This plant prove to be root prone if kept too cold in winter. To help stop this a good deep collar of pumice or lava grit is an excellent idea. It prefers a full sun position and possibly afternoon shade in summer. If you can place it so that this occurs the plant will be much happier.
Propagation: Seeds, but plants are often grafted making them easier to grow, particularly through the winter. If possible using a rootstock that is more hardy than the Uebelmannia is the ideal.