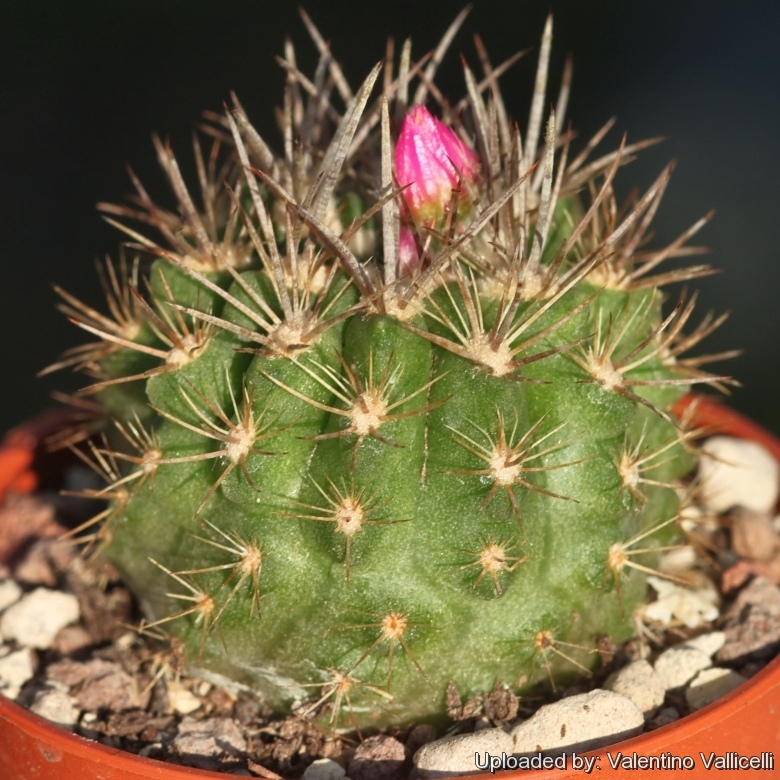 Description: Eriosyce subgibbosa var. wagenknechtii f. napina much better known under its old name, Neoporteria wagenknechtii v. napina is one of the morphological or local form of the very variable Eriosyce subgibbosa. It distinguishes mostly in having fewer ribs and smaller flowers less than 3 cm long. The var. napina has a swollen carrot like root often much larger than the standard stem, while Eriosyce subgibbosa var. wagenknechtii tends to have more branched roots, however most authors consider both them the same species as this differences are often determinate by growing conditions, and the number of root-branches varies greatly from plant to plant even within the same population.
Habit: Solitary, but sometimes branched, columnar perennial cactus erect or somewhat procumbent when long.
Roots: Swollen often much larger than the stem.
Stem: Globular to columnar, up to 30 cm tall (or more), up to 11 cm wide. Grey-green.
Ribs: 11-17 very obtuse, more or less notched with chinlike protrusions.
Areoles: Large, 6-13 mm long and 7 mm broad, woolly, 3-10 mm apart.
Spines: Partially hiding the ribs, needle like, more or less long and dense, white, yellowish, golden yellow, brown, or nearly black, while older one became greyish.
Radial spines: 10-20, 1,5-2,5 cm long, stright, spreading, dark grey to tan.
Central spines: 3 to 6, stronger, up to 4 cm long, straight or recurved and spreading, almost black, becoming grey with age.
Flower: Pretty small up to about 2,5 cm long, bi-coloured with magenta, rose to the violet petal tips and pinkish-white, white or yellowish-white throat.
Blooming season: Blooms late summer.
Fruits: Barrel shaped, 1,5-2 cm long, 1 cm in diameter, red or reddish-green partly hollow at maturity, only scarcely woolly, apical areoles not spinescent.
Seeds: Brown. 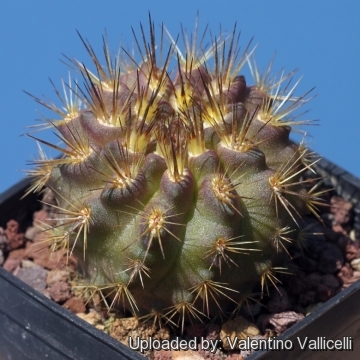