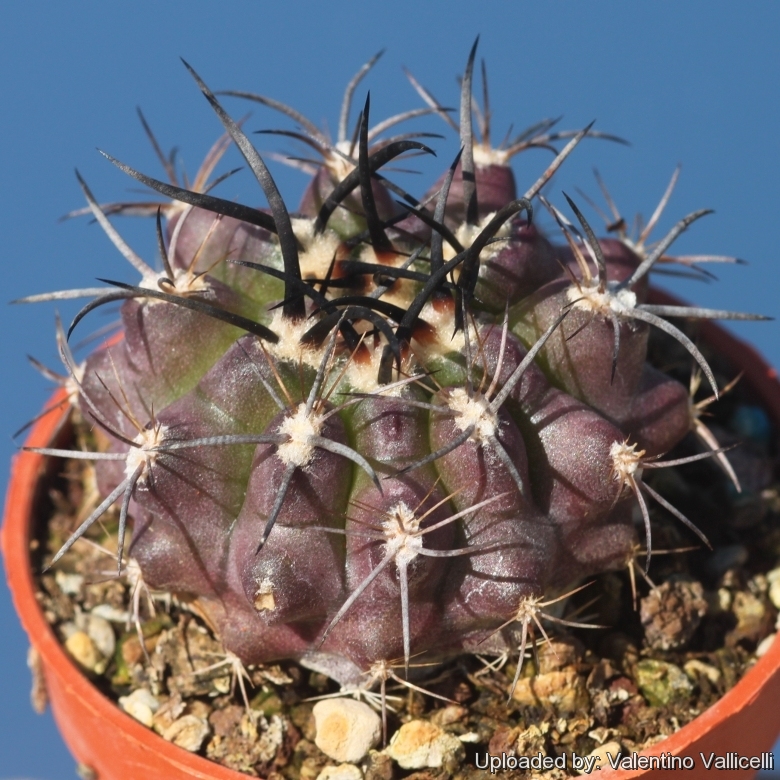 Description: The Eriosyce clavata is one of the innumerable and controversial form and variety of Eriosyce subgibbosa which is a very variable species which has received numerous names. It is one of the few species that forms cylindrical stems with age.
The form procera is spherical when young and elongated with time, growing up to 60 cm in habitat and has stouter curved spines.
At first glance it may be confused with Echinopsis coquimbana.
Stem: Solitary, but sometimes branched, globular to columnar, up to 60, up to 10 cm wide. Grey-green, brownish-green or blackish-green. ("clavata" means "club shaped" and refers to the usually cylindrical stem shape of this form).
Ribs: About 20
Spines: Nearly hiding the ribs, subulate, more or less long, brown, or nearly black, while older one became greyish.
Radial spines: 8-15, radiating.
Central spines: 4 or more strong, recurved and spreading, often darker at the tips.
Flower: Pretty relatively small up to about 4 cm long, bi-coloured with magenta, rose to the violet petal tips and pinkish-white, white or yellowish-white throat, giving the sensation of being fluorescent and being very difficult to photograph in good conditions because that particularity.
Blooming season: Blooms early in late winter to spring. It is advisable to leave them dry from middle of November to obtain fantastic flowering later in January/March.
Fruits: Ovoid to cylindrical, partly hollow at maturity, only scarcely woolly, apical areoles not spinescent.