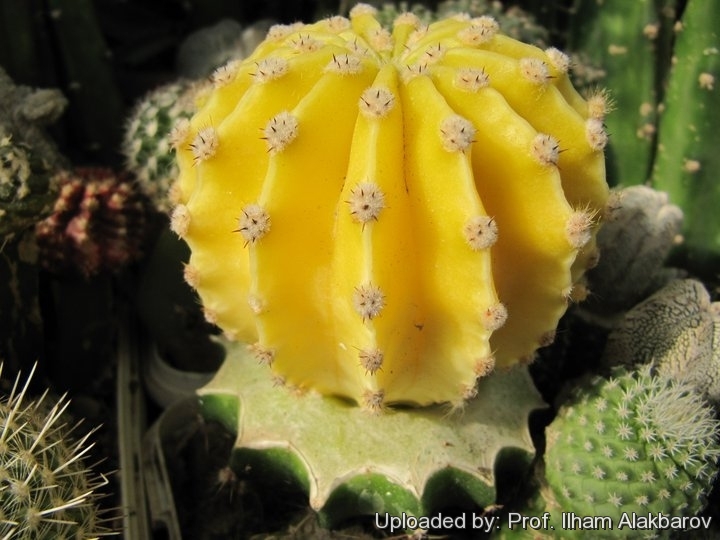 Origin and Habitat: Garden origin. The natural species is native to Southern Brazil, Uruguay, and province of Entre Rios, Argentina.

Description: Echinopsis eyriesii is a very popular large caespitose cactus, widely grown for the huge nocturnal flowers. It is the best known and most commonly grown globular cactus. In time it may exceptionally forms large mounds.
Forma aurea or aurata (Yellow form): The schizochromic form (Parodia magnifica f. aurata) has pale yellow stems due to the absence (or reduced production) of chlorophyll pigments: every other pigment is present at normal levels, the dominant green colouration is lost, but will still more than likely have normal other pigments that give the yellow overall appearance of the stem. This plant with yellow stems is very attractive and highly prized. IT is almost always seen grafted on stronger columnar species, and cannot can be grown on its own roots. However some clones have enough chlorophyll in their tissues and can be grown on they own roots too, but very slow growing.
Stem: Yellow, globular, later elongated and almost cylindrical, 15-30 cm high, 12 to 15 cm thick, and heavily ribbed.
Ribs: 9 to 18, not tuberculate, prominent, rather thin above.
Areoles: Circular, filled with white or tawny wool up to 1 cm apart.
Spines: Several, 14 to 18, very short.
Radial spines: Thin 5-10 mm long often missing in adult specimens.
Central spines: 4-8 thick, conical, less than 5 mm tall, hard, blackish. Young plants and offshoot initially have longer and weaker spines, the stout short conical spines appear only later.
Flower: Nocturnal, pure white, very large, from the side of plant but above the middle, 17 to 25 cm long, 5-10 cm in diameter (The presence of pink shades in the flower shows hybridization). Floral tube funnel-shaped with a strong basal part underlying the ovary, then narrow and variously curved and gradually extending into the crown, dark green covered with small, ovate, brownish scales and dark grey to black hair. Lower outer perianth segments, rather linear and greenish, inner perianth-segments broad and white, acuminate. Throat greenish, with several several stamens around the inner perimeter. Stamens and style shorter than the perianth-segments. Flowers are intensely fragrant.
Blooming season: Flowers appears from spring to summer in several flush at night. In sunny weather the next day they fade, but in cold, rainy weather they may last two, rarely three days.
Fruit: Up to 5 cm long, green, covered with hairs and containing a large number of black seeds.
Remarks: Echinopsis eyriesii is strictly related and forms a complex with Echinopsis oxygona, Echinopsis multiflora and Echinopsis multiplex (and their hybrids). All this species have the same elongated stem with sharp ribs and long funnel shaped flowers, but distinguish for the longer spines and the pink flowers usually unscented. Sometime Echinopsis eyriesii is confused with Echinopsis subdenudata that has round (not elongated) stems with very large woolly areoles.

Cultivation and Propagation: Variegated and albinous cacti are regarded as choice and difficult in cultivation, but despite that many of them are relatively easy to grow. But be aware that they cannot tolerate prolonged exposure to direct sun light (especially during the hottest summer days), so grow them in half-shade or under filtered sun. They are sometime seen as grafted plants, but many grow well on their own roots, too.
On the contrary, the albinos can survive only if grafted on a strong green base.
Use mineral well-permeable substratum with little organic matter (peat, humus). Water sparingly from March till October and keep perfectly dry in winter at temperatures from 5 to 15 degrees centigrade. (In general these plants are more tender and cannot endure freezing temperatures ) In the rest period no high atmospheric humidity!!
Propagation: Plants are often grafted onto column-shaped cacti.