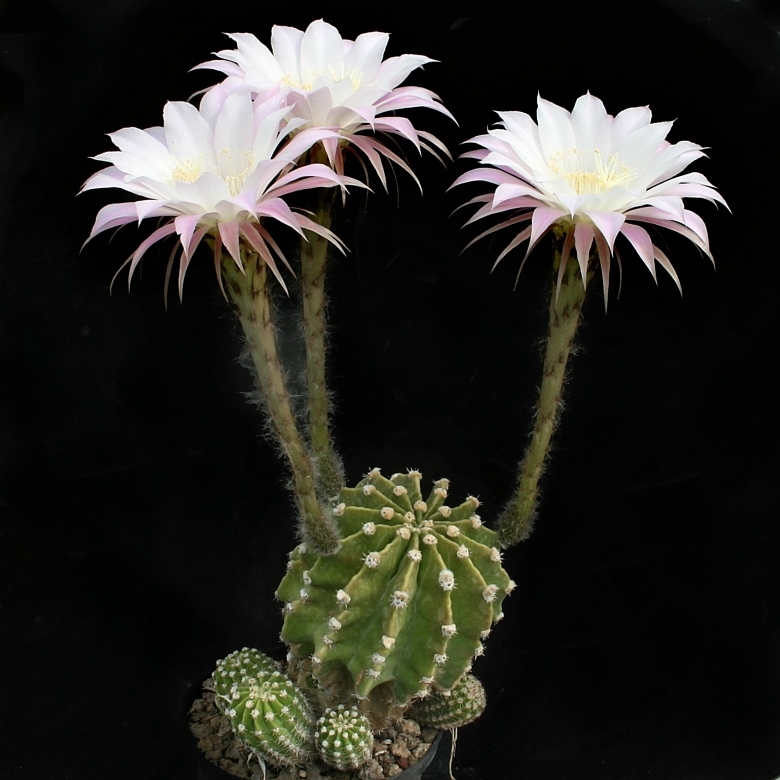 Origin and Habitat: Southern Brazil, Uruguay, and province of Entre Rios, Argentina.
Type locality: Buenos Aires.
Habitat: It grows in grassy plains or in low hills in lowland up to to1000 metres above sea levels. The climate is tropical, continental. Winter are completely dry, while in summer the landscape is flooded by torrential rain and soaked with water. Rainfall up to 1500 mm per annum. Average annual temperature 25-30 ° C. Rarely the temperature drop below zero degrees even if the landscape is open to the cold south pamperos winds. Echinopsis eyriesii grows among grasses and shrubs along with other cacti of the genera Notocactus, Gymnocalycium, Frailea, Cleistocactus and Cereus.

Description: Echinopsis eyriesii is a very popular large caespitose cactus, widely grown for the huge nocturnal flowers. It is the best known and most commonly grown globular cactus.
Habit: Simple or (usually) clustered, branching basally. In time it may exceptionally forms large mounds up to 1,5 m tall and 2-3 m wide.
Root: Fibrous.
Stem: Globular, later elongated and almost cylindrical, 15-30 cm high,12 to 15 cm thick, dark green and heavily ribbed.
Ribs: 9 to 18, not tuberculate, prominent, rather thin above.
Areoles: Circular, filled with white or tawny wool up to 1 cm apart.
Spines: Several, 14 to 18, very short.
Radial spines: Thin 5-10 mm long often missing in adult specimens.
Central spines: 4-8 thick, conical, less than 5 mm tall, hard, blackish. Young plants and offshoot initially have longer and weaker spines, the stout short conical spines appear only later.
Flower: Nocturnal, pure white, very large, from the side of plant but above the middle, 17 to 25 cm long, 5-10 cm in diameter (The presence of pink shades in the flower shows hybridization). Floral tube funnel-shaped with a strong basal part underlying the ovary, then narrow and variously curved and gradually extending into the crown, dark green covered with small, ovate, brownish scales and dark grey to black hair. Lower outer perianth segments, rather linear and greenish, inner perianth-segments broad and white, acuminate. Throat greenish, with several several stamens around the inner perimeter. Stamens and style shorter than the perianth-segments. Flowers are intensely fragrant.
Blooming season: Flowers appears from spring to summer in several flush at night. In sunny weather the next day they fade, but in cold, rainy weather they may last two, rarely three days.
Fruit: Up to 5 cm long, green, covered with hairs and containing a large number of black seeds.
Remarks: Echinopsis eyriesii is strictly related and forms a complex with Echinopsis oxygona, Echinopsis multiflora and Echinopsis multiplex (and their hybrids). All this species have the same elongated stem with sharp ribs and long funnel shaped flowers, but distinguish for the longer spines and the pink flowers usually unscented. Sometime Echinopsis eyriesii is confused with Echinopsis subdenudata that has round (not elongated) stems with very large woolly areoles.

Notes: In the 19th century Echinopsis eyriesii was extensively hybridized with other Echinopsis and Lobivia species giving rise to a number of cultivars with big and colourful flowers. 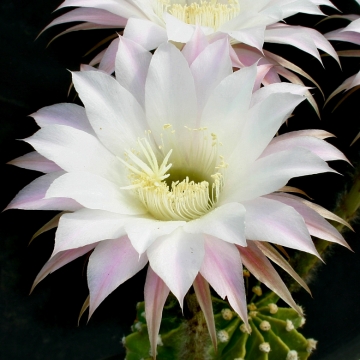 Cultivation and Propagation: Echinopsis eyriesii (and its forms and varieties) is very easy to grow and cold hardy as low as -7°C (or less).
Growth rate: This species produces noticeable amounts of growth each year if kept well fed and watered throughout the warmest months, particularly if it has been acclimatised to accept full sun. Plants grown in the ground form soon imposing specimens.
Sun Exposure: Outside full sun, inside needs bright light, and some direct sun. During winter month, put them in a cool luminous place and encourage them to enter winter dormancy by withholding water and fertiliser over the winter as they will etiolate, or become thin, due to lower levels of light.
Soils: It needs a fertile, well drained soil mix.
Waterings: Water the plants well and allow them to dry before watering again. This species seems to do better with a little more water than most cacti. In fact, its cultivation requirements are really more like 'normal' plants than most other cacti.
Fertilization: During the growing season fertilize them monthly with a balanced fertilizer.
Pest and diseases: They are susceptible to fungal diseases if overwatered, but are not nearly as sensitive as many other cacti, especially in warm weather. They tend characteristically towards black rotted spots unless watering is moderate and only in hot weather, if kept damp through cold periods, they will invariably suffer.
Propagation: Cutting or from seed. The seeds are quite easy to germinate and grow. Their main requirements consist of high humidity levels, free-draining soil mix, and enough water, light, and nutrition. The flower colour is not always true from seeds.