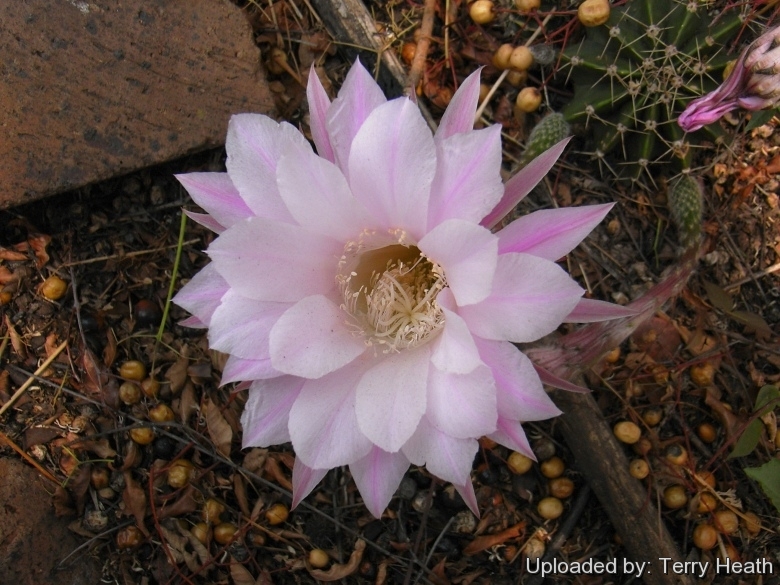 Origin and Habitat: Bolivia (Chuquisaca, Santa Cruz y Tarija), Argentina (Chaco, Corrientes, Entre Ríos, Formosa, Jujuy, Salta, Santa Fe andSantiago del Estero), Uruguay, Paraguay and Southern Brazil.
Altitude: Echinopsis oxygona occurs at elevations from 50 to 1,000 metres above sea level.
Habitat and Ecology: The species grows on walls and rocky outcrops in pampa grasslands and deciduous forests. It is abundant, but sparse and the subpopulations are generally stable and there are no major threats affecting it. Grazing, cattle trampling, agriculture, invasive grasses, and fire may represent threats. They are pollinated by insects or small animals, principally moths and bees.

Description: Echinopsis oxygona, the “Easter Lily Cactus”, is known for having gorgeous, night-blooming, pink flowers at the ends of long tubes often as large or larger than the whole plant, it is very popular. The flower has a sweet smell. It is very variable.
Habit: These cacti grow rapidly and usually forms big clumps up to 60 cm in diameter.
Stem: The stems is depressed globose, globose to elongate, eventually short cylindrical, clustering from near the base, green passing to greyish green or somewhat glaucous, (5-)10-15(-25) cm in diameter up to 30 cm high.
Ribs: 11-18, straight , broad at base, rounded on back .
Areoles: About 1 cm apart.
Spines: Very short to 2,5 cm long and stout, hard, blackish, yellowish-brown or horn coloured with dark tips, spreading and more or less curved.
Central spines: 1-5, sometimes absent, thick, needle-like 5-30 mm long, eventually up to 40 mm long.
Radial spines: The areoles have 3-15, more or less needle-like radial spines, 3 to 25 mm long.
Flowers: Usually from areoles halfway up the side of the plant, white, pink, pale red to lavender, funnel-shaped, fragrant with long tubes 15-22(-30) cm long, 5-10 cm in diameter, the tube slender, nearly cylindric, its scales numerous and small: Inner perianth-segments acute or acuminate. Old plant may have dozen of stunning flowers open at a time.
Blooming season: This species blooms from late spring to all summer long. The flower last only one day in full beauty, they open at evening and start to wither the next afternoon on hot days. On cool days they will last longer.
Fruit: Fruits green, to 4 cm long and 2 cm in diameter.
Remarks: This plant has been widely crossed with other species of Echinopsis and the number of cultivars seems unending. The flowers are lovely and are available in an assortment of bright colours ranging from magenta, red, orange, to yellow, and much sought-after by Cactophiles everywhere.

Subspecies, varieties, forms and cultivars of plants belonging to the Echinopsis oxygona group

Notes: The cacti that love hawkmoths pollination.
Many species of cacti utilize hawkmoth pollination and depend on hawkmoths for successful seed production. This species (Sphingophilous plants) are easily recognized for the white trumpet nocturnal flowers (e.g., Echinopsis multiplex, Acanthocereus tetragonus, and Hylocereus hundatus) whereas others are more tubular (species of Selenicereus and Stenocereus eruca). It is unlikely that only one moth species is pollinating only one flower species, so there will be mixed pollen grains of many species on the insect. That notwithstanding, hawkmoths are credited as fairly reliable long-distance cross-pollinators because they are able to carry even small amounts of pollen to isolated, self-incompatible plants in tropical areas to produce fruits with viable seeds.
Sphingophilous flowers are largely unused by other classes of pollinators. These nocturnal flowers are unavailable to day-active pollinators until the next morning, and, in fact, bees of various types sometimes arrive during morning hours to accomplish an even higher level of pollination success.

Cultivation and Propagation: The Easter Lily cactus Echinopsis oxygona is one of the more common cacti ,extremely resistant to cultivation errors and easily reproduced by offshoots. The only thing that can kill this plant is cold. Nevertheless, it is appropriate to provide adequate growing conditions in order to obtain abundant blooms. It has very large fragrant nocturnal flowers and many plant lovers are willing to take care of it all year for one or a few magical nights with exotic charm.
Growth rate: It is a relatively rapidly growing species that will make large clumps given the best conditions.
Soils: It likes very porous standard cactus mix soil, but it is extremely adaptable to various growing media. Prefer a low pH compost, avoid substrata rich in limestone.
Repotting: This plant needs plenty of space for its roots, repotting should be done every other year or when the it has outgrown its pot. Use pot with good drainage.
Watering: Needs moderate to copious waterings in summer (it is more demanding than other cactus), but do not overwater, keep dry in winter at a minimum temperature of 0°C.
Fertilization: Feed with a high potassium fertilizer in summer.
Hardiness: Reputedly resistant to light frost if kept on the dry side prior to, and during, cold weather (hardy to -2 C ° C, or less for short periods). However warmth throughout the year will increase the grower's success (5°-8° C during rest season).
Exposition: The plant tolerates bright situations which encourages flowering and heavy spine production, but is likely to suffer from sun scorch or stunted growth if over exposed to direct sunlight during the hottest part of the day in summer. It grows well with filtered sunlight or afternoon shade.
Uses: It is an excellent plant for container growing. It look fine in a cold greenhouse and frame or outdoor in a rockery. It is also used as a rootstock for grafting delicate and slow growing cactus species.
Pests & diseases: It may be attractive to a variety of insects, but plants in good condition should be nearly pest-free, particularly if they are grown in a mineral potting-mix, with good exposure and ventilation. Nonetheless, there are several pests to watch for:
- Red spiders: Red spiders may be effectively rubbed up by watering the plants from above.
- Mealy bugs: Mealy bugs occasionally develop aerial into the new growth among the wool with disfiguring results, but the worst types develop underground on the roots and are invisible except by their effects.
- Scales: Scales are rarely a problem.
- Rot: This species is particularly easy and accommodating, seldom suffer of cryptogamic diseases. Rot it is only a minor problem with Echinopsis if the plants are watered and “aired” correctly.
Propagation: Division of larger clumps, direct sow after last frost. Seeds germinate in 7-14 days at 21-27° C in spring, remove gradually the glass cover as soon the plants will be well rooted (ca 1-2 weeks) and keep ventilated, no full sun for young plants! To make a cutting twist off a branch and permit it to dry out a couple of weeks, lay it on the soil and insert the stem end partially into the soil. Try to keep the cutting somewhat upright so that the roots are able to grow downward.