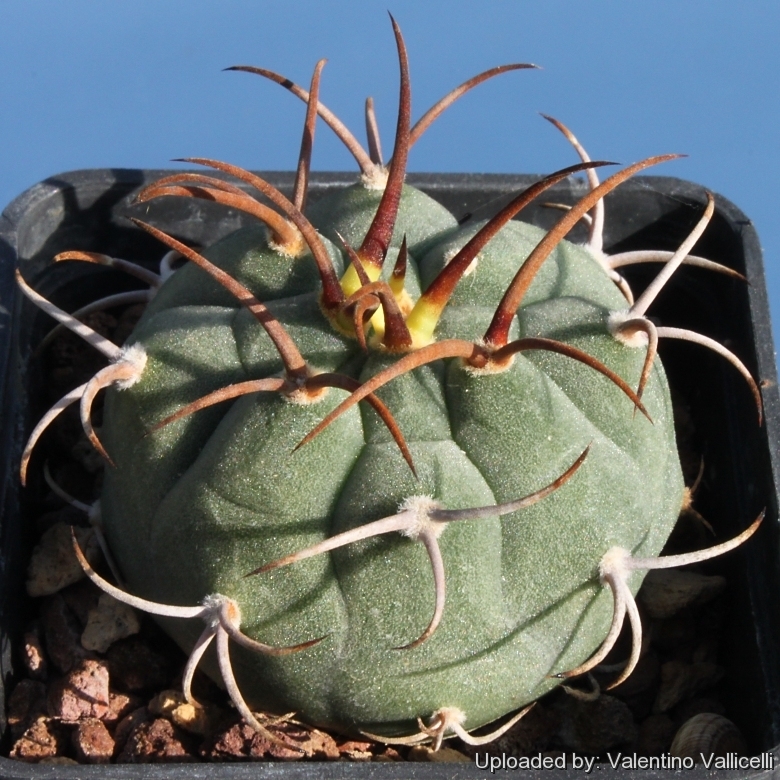 Description: Matucana madisoniorum var. horridispina is a morphological form of Matucana madisoniorum distinguished from the latter by the stronger curved spines that are always present, all the other characteristics are identical, namely size and shape of stems, flowers, fruits, roots etc. clearly show that they are conspecific.
Habit: It is a solitary globose cactus that may clump with age.
Stem: Flat globular to elongate with age up to 15 cm tall and 10 cm in diameter. One of most endearing feature of this plant is its unusual rough textured blue or grey-green epidermis.
Spines: Sometimes individual plants may be almost entirely spineless, while other specimens are covered with spines or have spines missing on parts of the plant. Seedlings of this species are all densely covered with long, curving spines; however, seedlings from plants growing at lower altitudes will ordinarily lose their spines at maturity, while those from higher altitudes keep theirs, but it is very variable in this respect, and spineless plants can grow spiny offsets, or get just an occasional spine.
Flowers: Zygomorphic tending to lean on one side, bright orange-red, 3,5 cm in diameter, and slightly longer 5-7 (10) cm long.
Blooming time: Flowers more than once in several flushes throughout the summer.