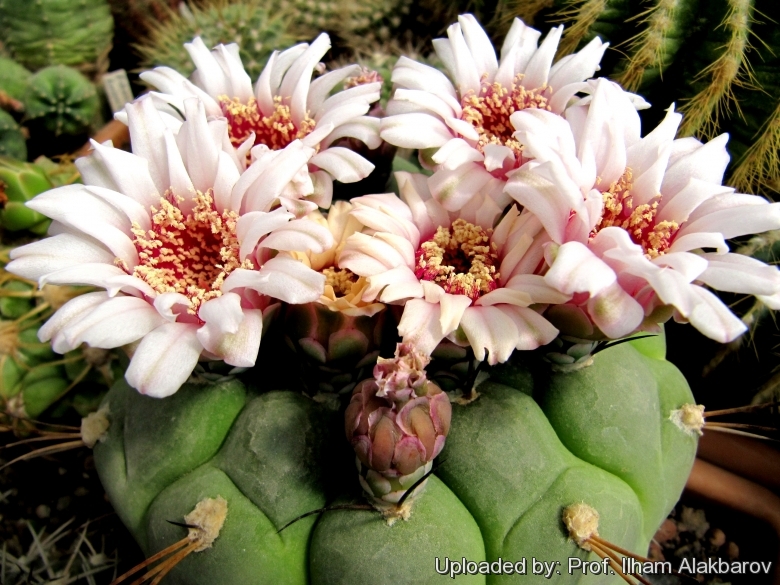 Origin and Habitat: South-east of Bolivia ( Cochabamba, Santa Cruz, Chuquisaca, Potosi)
Altitude: It can be found at elevations of 1000-2500 metres above sea level.
Habitat: Grows often semi-buried in in deep rich sandy soil, rather in sunny rocky areas, on slopes or under spiny shrubs, at the border and clearings of the dry Chaco forest. It has a wide range, is abundant and the threats that affect part of its range are minor. Subsistence farming, agriculture and goat grazing are minor threats to the species in parts of its wide range.

Description: Gymnocalycium pflanzii subs. zegarrae (better-known in cultivation as G. zegarrae) is a naturally occurring larger variant of Gymnocalycium pflanzii that looks very much like the standard pflanzii but fruits are green or rarely orange with white pulp (in subsp. pflanzii fruits are deep red-carmine at maturity and have a cherry-red pulp). However the two plants are quite similar and it is hard to tell apart one from the others if not fruiting.
Habit: It is a solitary or slowly clustering cactus, with peculiar spine clusters characteristically bent backward in a distinctive fashion.
Stem: Flattened-globose, 11-18 (at times up to 30 cm) cm in diameter, 6-10(-25) cm tall grey-green, to olive green. The epidermis has a velvety appearance. The apex is slightly depressed and woolly.
Ribs: 13 to 22 thick, large, divided into indistinct, polygonal-rounded (not chinned) tubercles, separated by arched furrows.
Roots: Fibrous
Areoles: Large long, oval up to10 mm long, with light grey felt, then blackish with time.
Spines: Strong, very stiff, bent backward, initially blackish with a brown base then becoming grey-pinkish to whitish brown with black point.
Radial spines: About 8, rigid slightly curved, radiating laterally, somwhat pectinated, up to 25 mm long.
Central spines:One, subulate, rigid 25-30 mm (rarely up to 5 cm).
Flowers: Campanulate to cup-shaped born near the apex, diameter and height 30-45 mm. Pericarpell dull green very short.
Fruits: Globose to ovoid of approximately 2 cm of diameter, green or rarely orange with white pulp and splitting open vertically at maturity.
Seeds: Microsemineum type, section pirisemineum, very smal.