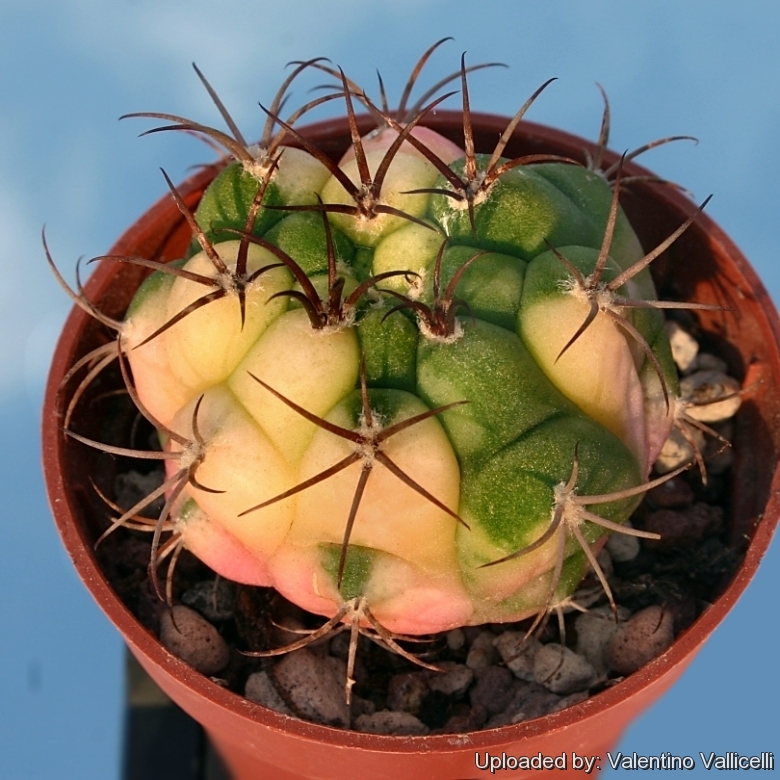 Notes: A variegated plant has sectors, patches or stripes with two or more different colours, even distinct shades of green. Plants with variegated stems or leaves are often attractive and highly prized. In most species the stems or leaves are normally green, and variegated epidermis is an uncommon mutation, termed a chimera. A chimeral variegation is due to losing the ability to produce chlorophyll in some of the plant’s tissue, so that this tissue is no longer green. Tissues lacking chlorophyll are usually white or pale yellow coloured (due to carotenoid pigments) or red (due to betalain or anthocyanin pigments) contrasting with the normal green tissue. There are several forms of variegation, depending on the tissues that have been affected. The variegation in some forms is unstable. The extent and nature of the variegation can vary, and sometimes the plant will return to the green form. In others it is stable and does not change under normal conditions. Because the variegation is due to the presence of two kinds of plant tissue, propagating the plant must be by a vegetative method of propagation that preserves both types of tissue in relation to each other. VariegateGymnocalyciums are very rare and priced in cultivation. All variegates are mutants. Something has gone wrong with the cellular structure of the growth tip (apical meristem) of the plant. As a result of this mutation, chlorophyll is missing from some or all layers of the plant epidermis. The odd variegate appears in many seedling batches in a small percentage, and is generally separated from normal plants. Variegated plants grow more slowly, and are generally smaller than non-variegates of the same species. Coloured areas are also generally weaker, and more susceptible to fungus, sunburn and other defects. A large well grown variegate Gymnocalycium is truly an achievement. These are harder to grow well than they appear. 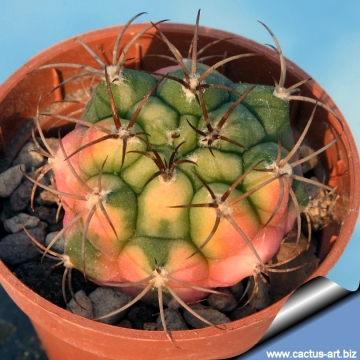 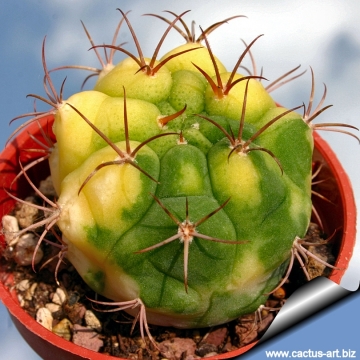 Cultivation and Propagation: Gymnocalyciums are very gratifying plants, their culture is easy and their flowering is abundant if we give them a well drained relatively rich substrate (if possible not limestone). Water regularly in summer (but do not overwater ) keep rather dry in winter, need frequent repottings and a very luminous exposure but avoid direct exposure to the sun rays. This species is particularly easy and accommodating, seldom suffer of cryptogamic diseases. Feed with a high potassium fertilizer in summer. Hardy as low as -5° C (or less) if kept dry.
Special cares for variegated forms: In the summer it is best to avoid direct sun during the hottest hours of the day (but they benefits from morning sun, that helps to produce strong and colourful spines). In case of cultivation in a sunny place it is best to plant with the variegated spot facing north-east, so it gets the least amount of direct sunlight as possible.
Propagation: Usually by Seeds (Seeds should be sown in a well-drained soil mix. Surface sowing is the best; seeds germinate in 14-28 days at 25° C, or from cuttings in spring (let them dry till the ends callous well). Then replant them in fresh cactus soil that is ever so slightly moist, and keep it that way till they root). The grafting is useless (excluded the cultivars completely deprived of chlorophyll), it does not bring anything concrete