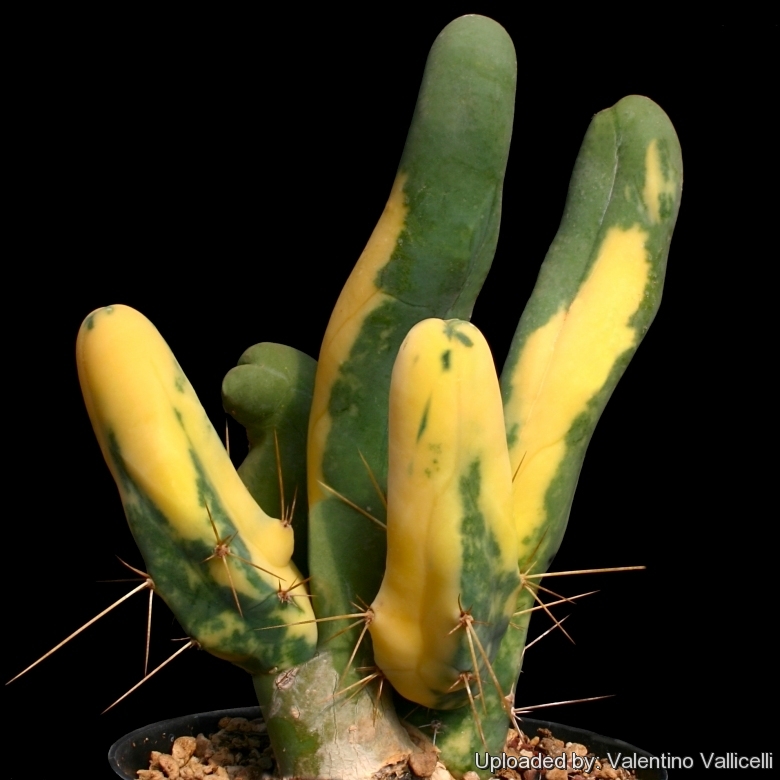 Description: The variegated form of Trichocereus bridgesii forma mostruosa is an extraordinary plant.This plant derived from the long jointed clone, one of the two Montrose form o T. bridgesii . It is a clustering plant that branches at the base and can slowly grow up to 40 cm tall.
Stem: The stem are composed by short upright sections that branches avidly up to 10-20 (-35) cm tall by 5 cm in diameter, light glaucous green variegated in creamy-yellow, with only a few areoles and spines in the basal portion. The upper part of the stem is cylindrical, smooth without areoles and resemble a penis. The lower part is spiny and shows a tendency to form ribs.
Spines: Honey-coloured to brown, located on the few basal nodes in groups of up to 4. They can grow up to 4–7 cm long.
Flowers: Not known.
NOTE 1: There exist several mutant varieties of this T. bridgesii that are highly prized by cactus impassioned. These include a cristate variety, a variegated variety and two variants of monstrose growth. Of the monstrose varieties, one is often known by the name Penis Plant.
Two more recently developed clones are now available, the fist of which exhibits both monstrose and cristate growth whilst the second shows both monstrose and variegated growth.
NOTE 2: The chemical composition of the 'Penis Plant' is supposedly the same as that of the typical T.bridgesii. 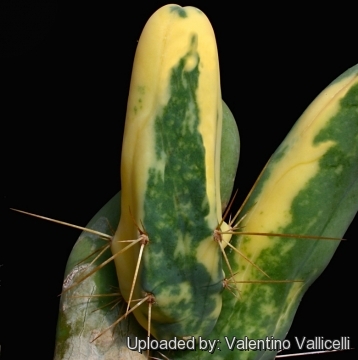 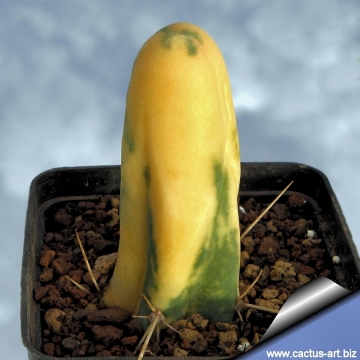 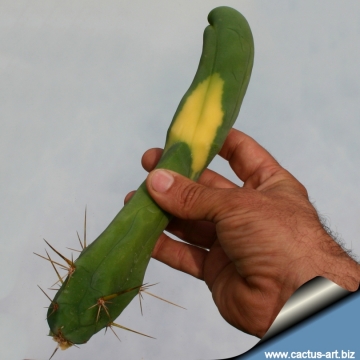 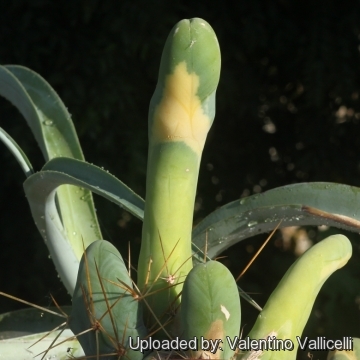 Cultivation and Propagation: It is very easy to grow and cold hardy as low as -12°C (or less). Need a fertile, well drained soil mix. Water the plants well and allow them to dry before watering again. This cultivar seems to do better with a little more water than most cacti. In fact, its cultivation requirements are really more like 'normal' plants than most other cacti. During the growing season fertilize them monthly with a balanced fertilizer
Sun Exposure: This cactus need strong light exposures but it is subject to sun burning during the hottest month of summer especially if the temperatures are high and ventilation insufficient, so grow them in light shade, inside needs bright light, and some direct sun.. During winter month, put them in a cool luminous place and encourage them to enter winter dormancy by withholding water and fertiliser over the winter as they will etiolate, or become thin, due to lower levels of light. They are susceptible to fungal diseases if overwatered, but are not nearly as sensitive as many other cacti, especially in warm weather. They tend characteristically towards black rotted spots unless watering is moderate and only in hot weather, if kept damp through cold periods, they will invariably suffer.
Propagation: It can easily be multiplied from cutting. Single sections are taken off, dried and rooted.