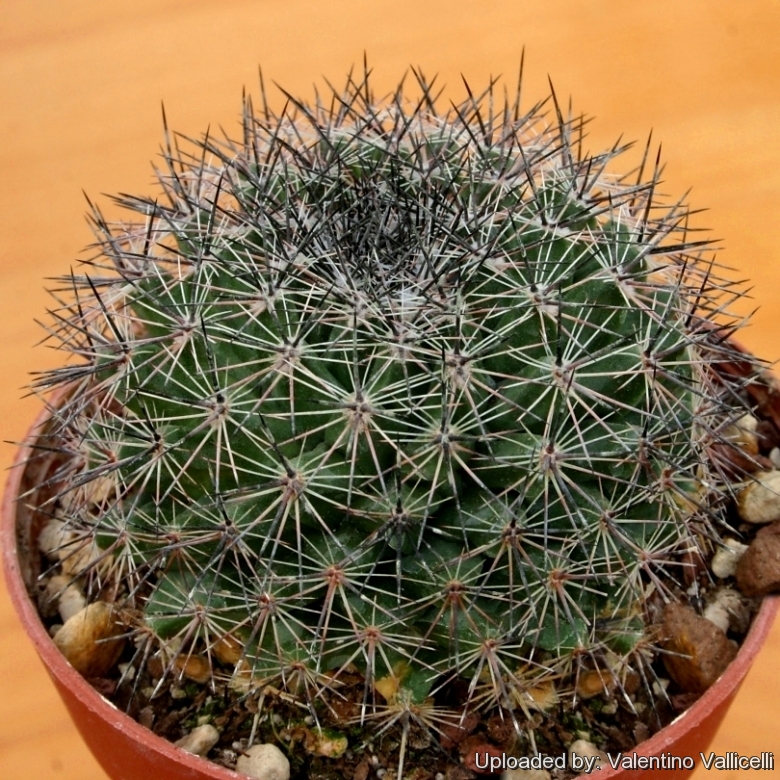 Description: Mammillaria pachycylindrica is one of the largest species in the genus and usually solitary. It is also known by many to be synonymous with Mammillaria grusonii ,but Reppennhagen considered it a separate form with, darker body, more spines, (20–23 radials and about 6 centrals), different colour of flowers and more cylindrical growth than grusonii.
Habit: It is usually solitary (it has a tendency to remain the same in the culture). It reveals its true beauty only as it becomes 10 or more years old, and reaches 35 cm in height.
Roots: Fibrous.
Stems: Cylindrical, dull green, up to 35 cm tall and 14 cm in diameter.
Tubercles: Pyramidal, terete, basally four-angled, slightly carinate, up to 12 mm tall, 10 mm wide, firm, with latex. The axil is naked or felty.
Areoles: Elliptic, 3 mm long.
Radial spines: 20-23, straight, needle-like, thicker at base, upper ones shorter, 4-8 mm long, at first greyish brown, brown to black with darker tips, later becoming grey.
Central spines: Usually 4 to 7 (but sometime up to 10), straight, stronger than the radial, 8 mm long.
Flowers: Diurnal, bell shaped, dull pink to yellowish brown with a wide brownish-pink midstrip, up to 20 mm long and in diameter.
Blooming season: Spring, and flowers remain open for about three or four days.
Fruits: Scarlet, club shaped, up to25 mm long and 8 mm wide.
Seeds: Brown, club-shaped, 1,2 mm long and 0,6 mm wide. Hilum small and basal.