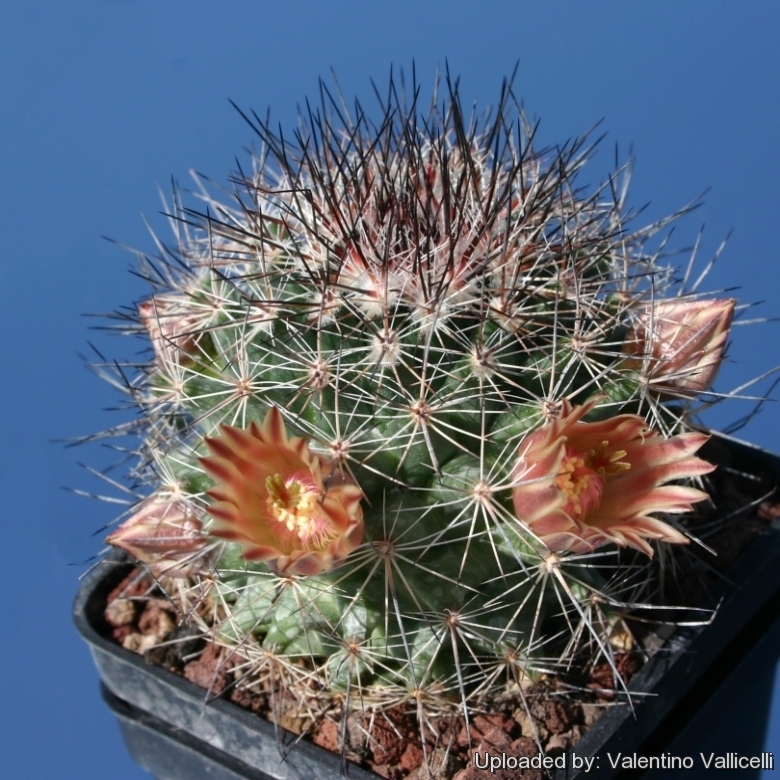 Description: Mammillaria zeyeriana is one of the largest species in the genus and usually solitary. It is also known by many to be synonymous with Mammillaria grusonii, but not sufficiently differentiated and considered merely a local variant of the latter (if not the same). It has spines of intermediate measurement, of which the radials are 10 to 15, 8-15 mm long, and the centrals are usually 4 stronger than the radial, 12-25 mm long. The flowers are similar to the type species.
Habit: It is usually solitary (it has a tendency to remain the same in the culture). It reveals its true beauty only as it becomes 6-10 years old, and reaches 20 cm or more in diameter.
Stems: Hemispherical or conical to short cylindrical, pale greyish green, up to 15(-30) cm tall and 10-25 cm in diameter.
Tubercles: Conical, terete, in 13 or 21 spirals, basally four-angled, slightly carinate, 10 to 12 mm tall, without latex, the axil is naked or sparingly woolly.
Areoles: Elliptic, 3 mm long.
Radial spines: 10-15, straight, needle-like, upper ones shorter, 8-15 mm long, at whitish to reddish, tipped brown, later grey or snowy- white.
Central spines: Usually 4 (but sometime up to 6), straight, stronger than the radial, brownish, the uppermost one curved, one descending, 12 - 25 mm long.
Flowers: Bell shaped, funnel-form, diurnal, light yellow-cream or pinkish with darker (brown or purple) midstripe with a yellowish throat, up to 25 mm long and in diameter.
Blooming season: Spring, and flowers remain open for about three or four days.
Fruits: Scarlet, club shaped.
Seeds: Brown. 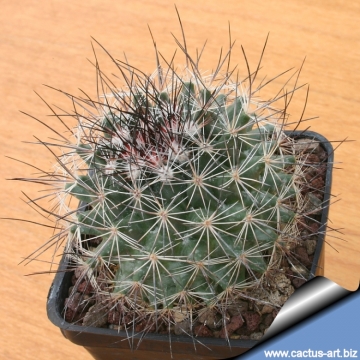 Mammillaria zeyeriana Photo by: Cactus Art
Send a photo of this plant.