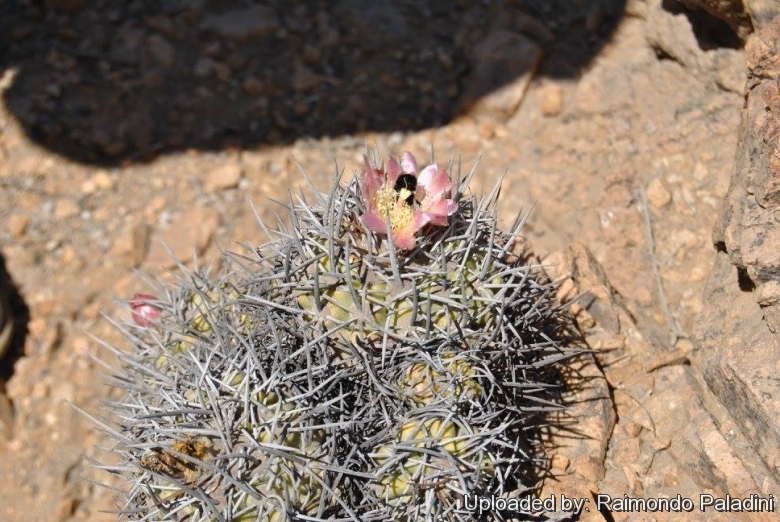 Origin and Habitat: Huasco and Vallenar Valley - Chile.
Altitude: It inhabit along the coast line at low too high elevations up to 1150 m.
Habitat: It grows on gravel apparently with no soil among granite rocks together with Copiapoa carrizalensis. This is a quite different substrate from other localities characterized by high concentrations of nitrates and minerals such as copper and arsenic.

Description: Copiapoa vallenarensis is one of the several forms of the very variable Coquimbana coquimbana which form a complex of related taxon. It is still unclear whether this variable complex is one or several species. There is so much variation that most authors choose to lump them together. Copiapoa vallenarensis distingushes from the fewer strong spines. This species is considered by Ritter strictly related to Copiapoa fiedleriana.
Habit: It is a strongly spined cactus that branches vigorously from the base, forming large clumps or cushions. In habitat, the bodies are much compact and very spiny. When grown in pots, this species tends to elongate and have darker spines on most of the body, with grey-white spines only appearing on the oldest areoles at the bottom of the plant.
Stem: Elongated-globose, pale to bright green or bluish green up to 40 cm tall, but usually less than 30 cm, and crowned by a dense mass of long white wool, particularly at flowering time.
Ribs: There are 10 to 20 strongly tuberculate especially in young specimens
Tubercles: With a rounded, raised edge and a wide base.
Areoles: Apical, convex, covered with short wool when young, later glabrous.
Radial spines: Few stout, 1-5 cm long, fairly slender or slightly curved, horizontal, pointing outwards, narrowed angle to the central spine, honey-amber, brownish-red or dark brown, becoming grey with age.
Central spines: 1(-4) thicker 3-6 cm long.
Roots: It has a shallow, diffuse root system or (less frequently) a short taproot.
Flowers: At the apex, diurnal closing at night, fragrant, protracting the period of opening many days, campanulate, from the centre of the white wool at the apex. The outer segments of the perianth are linear red-brown or greenish. The inner segments are wide and yellow with a subtle red mid-stripe or occasionally pinkish.
Seeds: Rounded-oblong 1,4-1,6 mm long, 1-1,2 broad and 0,8 mm thick, without papillae and surface sculpturing. 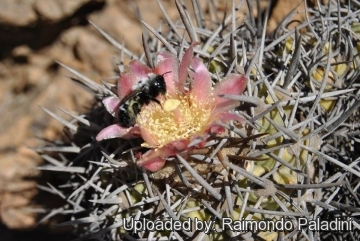 Flowers are wide and yellow with a subtle red mid-stripe or occasionally pinkish. Photo by: Raimondo Paladini 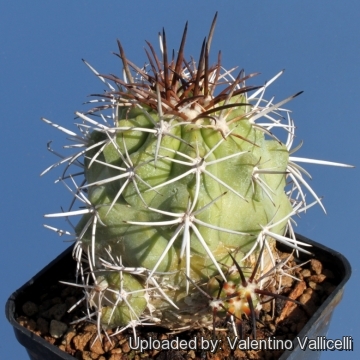 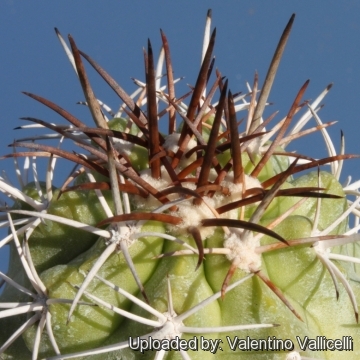 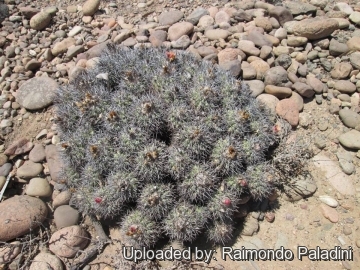 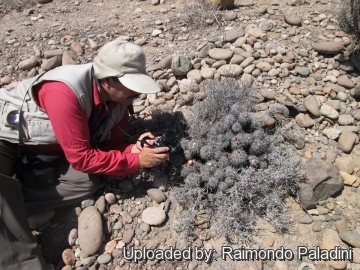 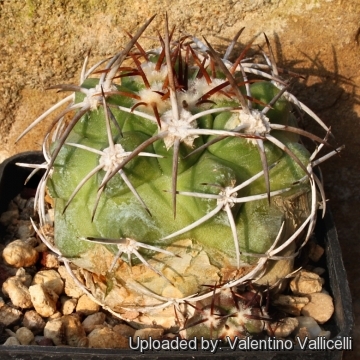 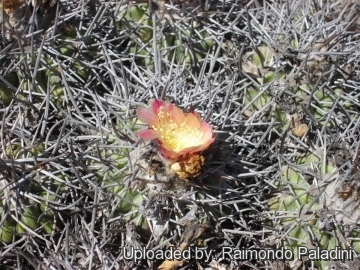 The flower appears on the plant apex and has a hard time coming through the dense mass of spines. Pink flower form. Photo by: Raimondo Paladini
Send a photo of this plant.