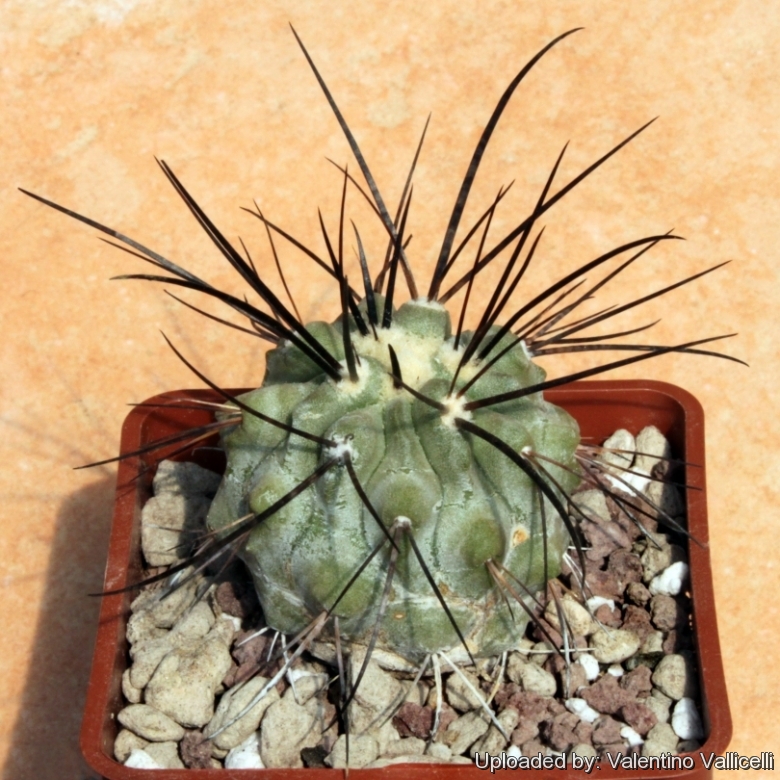 Origin and Habitat: Along the Chilean coast, both north and south of Quebrada Carrizal Bajo (28°08'S), Atacama, Chile.
Altitude: 200–500 metres above sea level.
Habitat: It grows near the coast, in a very dry area on sandy alluvial and rocky soils on the sea side hills. Despite the lack of rain where it lives, the extreme aridity is attenuated by the frequent, often dense, coastal fogs. It shows a recurrent pattern; usually it is overcast in the early mornings, the clouds dissipating during the late morning and returning during the late afternoons. The coastal formations in this region have vegetation corresponding to the Desierto Costero Huasco (Huasco coastal desert). Due to occasional precipitation, this vegetation has more permanence and continuity than the vegetation occurring farther north. The endemics include Copiapoa echinoides, Copiapoa malletiana, Eriosyce napina, Neoporteria carrizalensis and Neoporteria villosa var. laniceps. At times this region is dominated by geophytes, which can cover expanses of the desert spectacularly.

Description: Copiapoa carrizalensis forms huge mounds in habitat more than 1,80 m across composed of hundreds of individual, closely packed heads. The stem is divided into shallow ribs with dense needle-like spines. Aeroles are wooly but most of the wool is concentrated on top of the cactus where it is much thicker. It similar to Copiapoa cinerea but usually with longer spines and greener body.
Stems: Individual head, globose to short cylindrical, 6 to 16 cm in diameter, apex wool-covered. Epidermis white-dusted, covered greyish-white waxy film, but not so white like in Copiapoa cinerea.
Ribs: (15-)21-33 more higher and acute than in Copiapoa cinerea, slightly tuberculate and narrow between the areoles.
Areoles: Large oval, 5-9 mm in diameter, widely separated (1-2,5 cm apart) and covered with yellowish-grey or whitish-grey felt.
Spines: up to 8, stout, straight, stiff, needle-like, black to light brown, becoming greyish white as they ages. The very similar Copiapoa dealbata has mostly 1 single spine per areloa.
Radial spines: 1-7, up to 1 cm long,
Central spines: 1, sometimes absent, stouter 2 to 5 cm long.
Flowers: Apical, pale yellow, scentless, 2,8-3,5 cm long and in diameter. Outer perianth segments with brown-reddish mid stripes.
Blooming: Summer. It is not unusual for copiapoa to take 6-10 years before it starts blooming, but once it does, it should every year.
Fruits: Yellowish white to reddish green, rounded, with few scales.
Seeds: Black, bumpy. 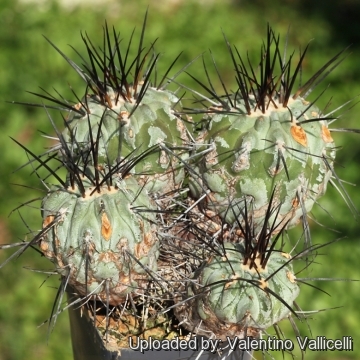 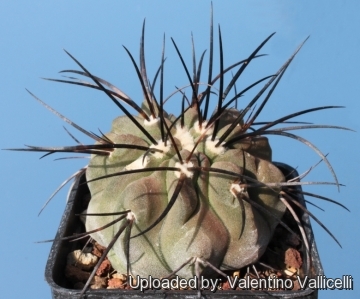 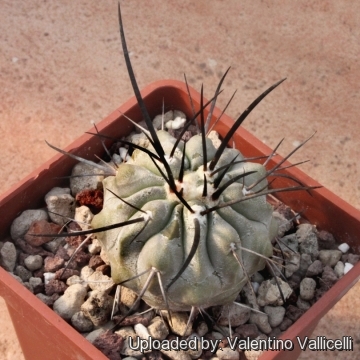 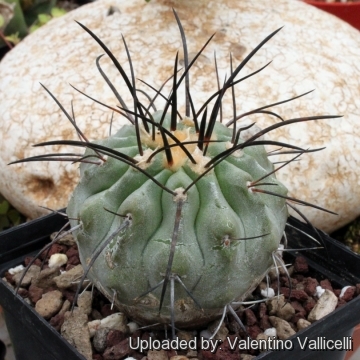 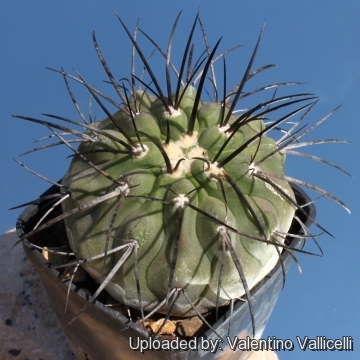 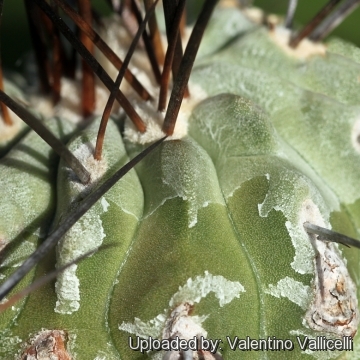 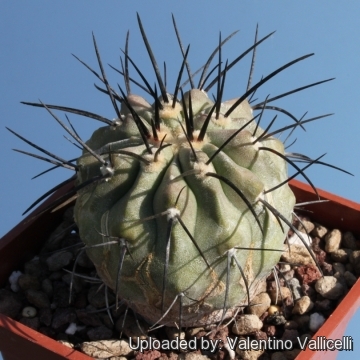 Copiapoa carrizalensis Photo by: Valentino Vallicelli
Send a photo of this plant.

Cultivation and Propagation: This cactus is kept for the beauty of its form. It is a summer grower species slow, but easy to cultivate, that like many cacti of the Peruvian deserts, present some problems in cultivation. It is in fact somewhat rot prone if kept in a non ventilated place.
Growth rate: It is a relatively rapidly growing and easily flowering species that will make clumps given the best conditions.
Soils: It likes very porous standard cactus mix soil, but can become too elongated if compost is too rich.
Repotting: Use pot with good drainage.
Watering: Water regularly from Spring to Autumn, but do not overwater and let the soil mix dry between waterings (Rot prone), keep dry in winter.
Fertilization: Feed with a high potassium fertilizer in summer.
Hardiness:Keep warm and dry in winter (10°C) to avoid rot. Not highly tolerant of a great deal of frost. (Frost tolerance 0°C)
Exposition: Requires full sun or light shade and careful watering to keep plant compact with strong coloured spines. Tends to bronze in strong light, which encourages flowering and heavy spine production. It must be protected from excessive heat and sun in summer.
Uses: It is an excellent plant for container growing. It always looks good and stays small. It look fine in a cold greenhouse and frame or outdoor in a rockery.
Pests & diseases: It may be attractive to a variety of insects, but plants in good condition should be nearly pest-free, particularly if they are grown in a mineral potting-mix, with good exposure and ventilation. Nonetheless, there are several pests to watch for:
- Red spiders: Red spiders may be effectively rubbed up by watering the infested plants from above.
- Mealy bugs: Mealy bugs occasionally develop aerial into the new growth among the wool with disfiguring results, but the worst types develop underground on the roots and are invisible except by their effects.
- Scales: Scales are rarely a problem.
It is wise to treat your whole collection with a systemic insecticide twice a year in spring and autumn.
- Rot: Rot is only a minor problem with cacti if the plants are watered and “aired” correctly. If they are not, fungicides won't help all that much.
Propagation: Seeds (or offsets if available) or by grafting onto a strong grafting stock like Selenicereus sp. Such grafted seedlings can be successfully cultivated for years. Grafting is often used to speed growth rate and to create a back-up to plants in collection. Seeds germinate in 7-14 days at 21-27° C in spring, remove gradually the glass cover as soon the plants will be well rooted (ca 1-2 weeks) and keep ventilated, no full sun for young plants!